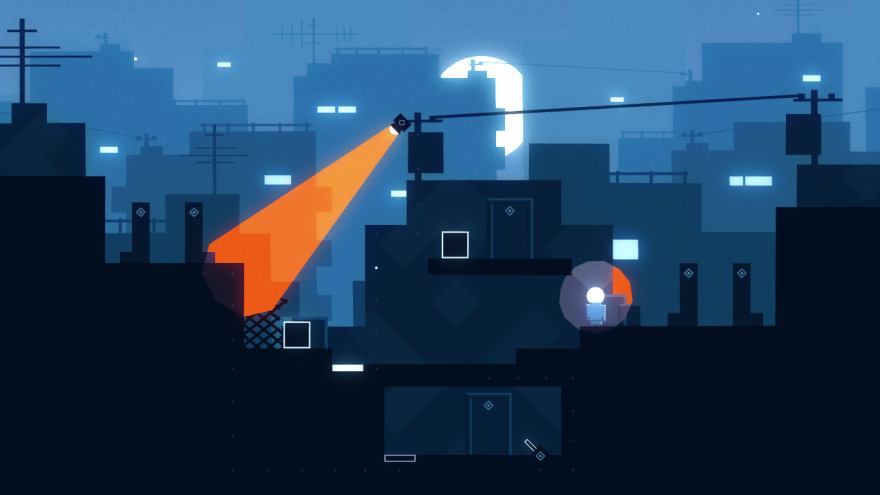 “Things are different at night.” A game based on this small sentence could go in any direction, really, but the most obvious path is probably towards horror. Not for Moscow-based game maker Artem Cheranev. He went with making a 2D puzzle game that uses light and shadow so you can move between different dimensions.

Called Night Lights, each level in Cheranev’s upcoming game contains one or more spotlights that illuminate a small area in golden rays. Everything else is in darkness; a contrasting blue to the light’s beam. Sometimes you can use levers or pressure switches to turn the lights off, at other times you’re able to move them along a rail, or rotate their angle, so that they light up different places. You do this because anything that is cast in that golden light is in the day realm where, sometimes, platforms or ladders that were there at night cease to exist.

You’d be right for saying that a puzzle game that toys with light and shadow isn’t new. There have been plenty that take this exact idea and spin it with their own yarn: Closure (2012), One Upon Light (2014), and Contrast (2013) for starters, there was even one called Of Light & Shadow (2012). But Cheranev has his own pedigree in this department, having made one of the most memorable Flash games of its time—it was also called Night Lights and can be played on Newgrounds.

“Back in 2013 I made little browser game with simple lights and shadows mechanics,” Cheranev said. “After that I always wanted to create big polished puzzle game with more complex features, but didn’t have an opportunity until 2016. So now I’m finally working on this project.”

While many of the mechanics have been transferred from the browser game original to this new version of Night Lights, what Cheranev has clearly done a lot of work on its visuals. Not only does the golden light and blue darkness add a striking look to the game, the environments that you puzzle your way through have been vastly improved. Notice how the moon shines through the trees in the forest, how leaves are depicted by chevrons and diamonds, epitomizing the angular style that dominates Night Lights now.

Those sharp lines and corners are more than mere fancy, though, as they’re actually crucial to the game’s concept. The GIF above demonstrates it best, showing how the lines of light are able to create new spaces through solid architecture. As you know, light travels in straight lines, so adding curvature or sticking to anything other than this orthogonal style would complicate each level, not only for Cheranev who has to make it, but for players who have to make sense of it.

Currently, Night Lights exists as a 15 minute demo that you can download either on itch.io or Game Jolt. Play it, have a go, and if you like what you see consider throwing some coin at its Indiegogo campaign. Cheranev has said that he will finish the game regardless of the amount of crowdfunding he acquires. What the money means is that he can work on it full time rather than every spare moment. The release date is brought closer the more money he gets, basically.

Oh, and before you go, it’s worth taking a look at a mobile puzzler called Shifter, which Cheranev made and released back in 2015. It splits its 2D levels into a grid and you can rearrange the tiles to help your character move from location to location, eventually reaching the end. It’s another game that proves his puzzle game pedigree.

You can support Night Lights on Indiegogo. The demo is available to download on itch.io and Game Jolt.