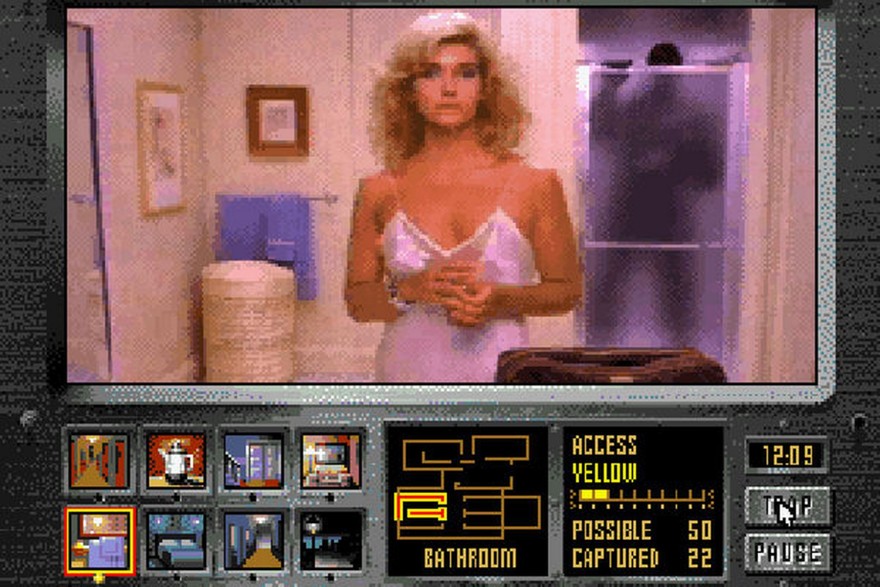 Despite all the flak it gets, there won’t ever be a comprehensive overview of gaming history that can ignore Night Trap. And that’s probably a lot more than the creators of this terribly campy, 90’s spoof-horror full-motion-videogame could’ve expected from it. After all, it sold over one million copies (a lot for the mid-90s), was the first of its kind, and directly contributed to the ESRB rating system the industry still uses today.

Which may be why, twenty years later, the creators of Night Trap feel emboldened enough to ask for $300,000 from their “fantastic community of fans” to re-release this infamous artifact in the hi-res it deserves.

Marketed as the first ever live-action interactive movie, Digital Pictures’ Night Trap put you in the shoes of a hero tasked with saving teen girls at a slumber party from pleather-suited vampire creatures. Footage of Night Trap almost invariably includes either a) a screeching co-ed in mom jeans, b) an auger (those hobbling vampire things) plummeting to its smokey demise, or c) a phallic-looking control pole that clamps around said co-ed’s neck. It’s not hard to imagine how that kind of material might catch the attention of senators who still felt sore about violent comicbooks not getting banned in the 1950’s.

And so it did. In 1995, several senate hearings were held on the subject of regulating violent videogames, with Night Trap as a central example of the “shameful,” “sick,” and “disgusting” games winding up in the hands of innocent children.

There remains no question that a not-so-subtle element of voyeurism fuels Night Trap‘s—erm—”appeal.” The entire FMV consists of the player, referred to only as “control,” watching attractive teen girls get kidnapped through a hidden camera. The interactive bit comes in when you must take evasive action to save the co-eds by setting off traps (note: no Star Wars reference even attempted, so it’s got that working against it too). But, really, could anyone even take their eyes off that revolting neck clamper long enough to bother trying?

Yet despite all of this, the intentions behind Night Trap were reportedly innocent enough (if a little misguided). The creators imagined it as a promising experiment in the marriage between two modern mediums. Their sustained belief in its potential remains clear throughout the campaign description. There’s an entire paragraph lamenting the squandered, yet still achievable possibility of interactive television as a platform. The campaign urges backers that “the future of gaming, or at least live-action interactive, is in your hands.” And honestly, their genuine enthusiasm is almost enough to forget all about how god awful Night Trap actually was.

So, sure, the game might give you a squirmy feeling. For all accounts and purposes, it’s still part rape fantasy, part girl-in-the-refrigerator trope. But, in retrospect, all the ruckus over Night Trap‘s violent and woman-hating ways seems sadly endearing. Oh, if they could only imagine what was to come. With no nudity or gore whatsoever, Night Trap probably wouldn’t even rate higher than a T (for Teen) today on the ESRB rating scale that it helped inspire. And doesn’t that kind of put our own obscenities into perspective?