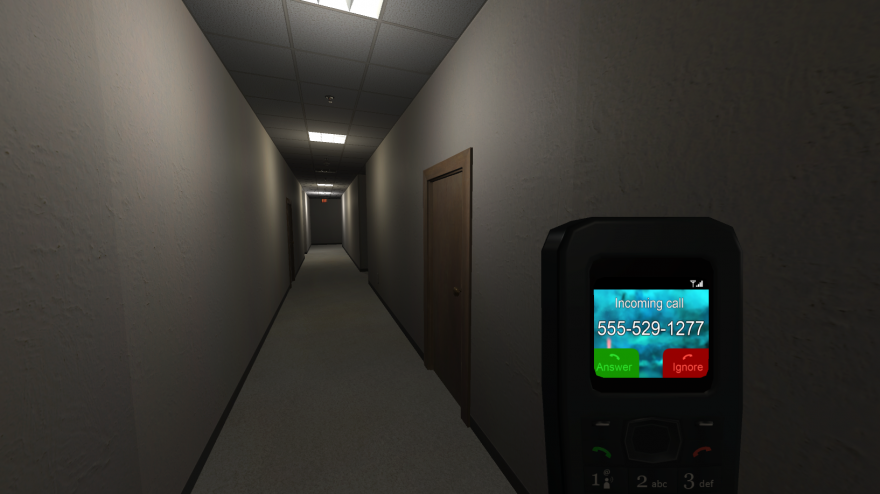 You do not answer a ringing phone. This should be one of the rules to surviving a horror movie if it isn’t already. Don’t pick up the goddamn phone. Don’t you remember Scream? Or When A Stranger Calls? If you pick up that phone the countdown on your death clock accelerates at a blistering speed. Don’t bother making a phone call either. That’s how Lynda opened herself up to Michael Myers’s choke hold in Halloween. Steer clear of phones, okay?

you cannot turn the phone off or otherwise silence it.

Unfortunately, in Nighttime Visitor, that’s not possible. This is a cell phone horror that turns the convenience of always being reachable into a threat against your life. It begins with your cell phone ringing as you stand outside the toilets in an office block. Of course, you answer it, condemning yourself immediately. The guy on the other end of the call, Alex, delivers a blunt explanation of his murderous intentions, ending with a convincingly psychotic laugh. Beep. He hangs up. You shit yourself.

What then unfolds is a terrifying game of cat-and-mouse around a maze of eerie and oppressive corridors towards the exit. There are many horror games that have this same set-up but with Nighttime Visitor it’s different. Here’s the reason why: “Alex will call you and try to locate you by the sound of your ringing phone.” Knowing this, when your phone does ring, it becomes a mad scramble to answer or end the call as quick as possible. And no, you cannot turn the phone off or otherwise silence it.

You’re left with gritted teeth, desperately staying silent while listening for nearby footsteps, once your cell phone has sent its terrible noise echoing through the corridors. You can never tell if Alex heard the rings and now has the upper hand or not. That grey area full of suspense is what pure terror is made of. And, if you want to make matters worse, deciding to answer Alex’s call will have him breathing heavily down the phone as if some overgrown beast. It does a lot to make Nighttime Visitor completely unnerving.

One thing you may get into the habit of doing under the false pretense that it will help you is calling up Alex’s cell phone. You do this in hopes of not hearing his phone ringing as that means he’s nowhere near you. But what if you did hear it? Your cell phone may seem like your only weapon against Alex but in Nighttime Visitor‘s corridors it only causes panic. Even if you know where he is there’s nowhere to hide and you cannot outpace him.

What Nighttime Visitor gets at in its own simple way is a modern fear that many of us feel; that we cannot avoid surveillance. It’s through our cell phones and computers that we are so easily trackable. Have a webcam or a microphone? Corporations and government organizations are most likely using it to listen or watch you without you knowing. They may not be out to kill us with this information but that doesn’t remove the thought that it could be done so easily, and if not by them, then by an invasive interlocutor.