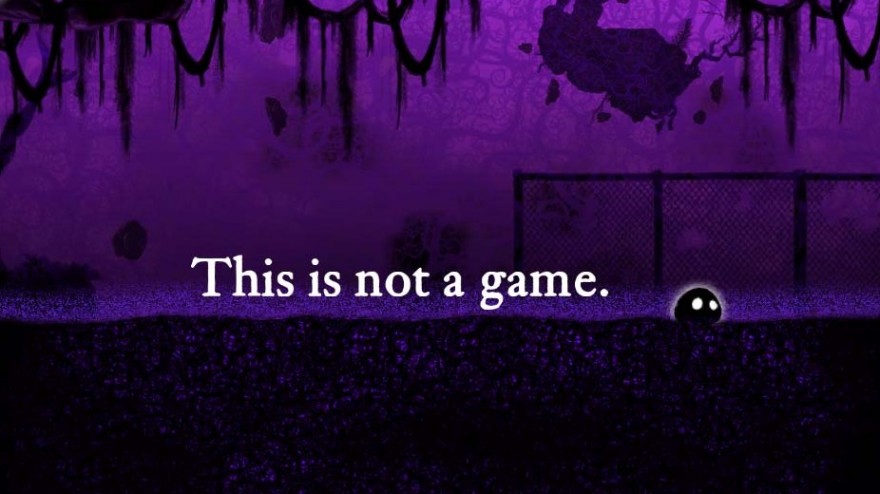 Nihilumbra might sound like an Italian metal band—and the trailer certainly confirms that first impression—but it’s actually a 2D hybrid puzzle-platformer from Beautifun Games. The title is Latin for “Shade of Nothing.” You think they would’ve gone with something a little more auspicious, but it turns out that in Nihilumbra, “nothing” isn’t just plain old nothing at all. It’s “The Void,” which is something else entirely.

The Void is your dark mother, a dimensional womb of writhing, shadowy tendrils. You play a shard of her, a sentient piece of Void broken off from the source. For some reason, you pop out into the natural world, eager to explore. Then The Void comes charging after you, an inexorable wave of destruction engulfing everything in sight. So you run. In part you push on because the narrator tells you to, in part because there is really only one option in a platformer: go right.

In part you push on because the narrator tells you to, in part because there is really only one option in a platformer: go right.

In Nihilumbra you spend your time traversing the landscape and dodging enemies with silly names but fantastic death rattles. The game’s central conceit is that since you come from The Void, colors are powerful magic. You switch back and forth between five colors that alter a surface’s physical properties. The puzzles arise from determining the right combinations of sliding, bouncing, or sticking to continue your journey. Every step of the way the narrator talks to you, a bit like in Bastion, except minus the interactive part.

From the very first screen, the narrator says things like, “You are Born” and, “Nothing can forsake the Void” in a gruff, action-hero voice. He spends equal time pointing out didactic facts, mocking your struggle against The Void, and rhapsodizing on pseudo-philosophical tangents.

You finish a level, he’ll inquire, “What’s the point of living if you’re going to die at the end? Does it have a purpose? Is it worth it to keep struggling day by day?”  Two or three puzzles into the next level, he goes, “Shyphoniths,” introducing a new enemy, “They are lethal. Be really careful.” Then a few screens later, “The world surrounding you is becoming colder and colder. It doesn’t care about you. It isn’t aware of your existence.” Thanks, Camus.

It’s not that I think these are useless questions, nor that it is impossible to address them in a videogame. In fact, doing so in a game has the potential to play off of the cognitive dissonance of considering one’s mortality while frittering away hours mashing buttons. But how can these questions be tackled in earnest when I am dodging the lethal Shyphonith by painting a sticky color on the wall and jumping to freedom?

The narrator’s gravelly gravitas attempts to provoke a sense of guilt from the player’s continued flight from the world-destroying Void, but fails precisely because platformers are linear. There is no choice within Nihilumbra. This makes the pseudo-philosophy hollow, amplified by the fact that the narrator is chiding you every other screen.

It’s unnecessary. Color-manipulation is intuitive enough that you grasp it as soon as you are given a puzzle or two. You’re granted a color by sniffing a magic flower. This teleports you to a short tutorial zone where the new color lets you surf along a frictionless floor, or stick to surfaces to wall-jump. It’s clean. It works.

What’s more, the atmosphere of the game succeeds on its own. The aesthetics, the music, and especially the relentless hunger of The Void do more to bring the tension alive than the narrator’s raspy cries. As I dash and puzzle my way through a chase sequence, I don’t need this guy whispering “Run” or “Fear” at me; I’m either awash with emotion from the game or I’m not. No amount of explicit emotional directives is going to change that. No amount of shoehorned philosophy-lite narration is going to make me stop, get out of my chair, and ponder the imponderable. I’m trying to play a game here.

The aesthetics, the music, and especially the relentless hunger of The Void do more to bring the tension alive than the narrator’s raspy cries.

Yet the narration cannot be ignored. If it were just an audio track, then it wouldn’t be so bad. You could just turn it off. No, it is woven into the visual tapestry of Nihilumbra. The text tumbles through each screen, giving the game a feeling like an interactive children’s book. Sometimes, it towers over every other visual element, “Why do you keep struggling? Doesn’t it make sense anymore? You are alone.” I tried to flip the in-game language to French or German to correspond with the narrator’s existential dread, but it only changed the visual text and not the spoken word. There was no way to get rid of this guy.

Like the protagonist, I was pursued relentlessly. Not by the Void, but by the awful narration. It wasn’t until completing the game, and unlocking “Void Mode” that I found a place in my heart for Nihilumbra. Void Mode is, thankfully, void of narration. It’s clean, no explanation, no story—just puzzles. Plus it is far, far more difficult. Each screen required multiple tries, and nobody was telling me, “Every time you get an ability, you forget about your problems. And your guilt.” It’s unfortunate that you have to slog through an existential wasteland to get to the sweet twitch-puzzles of Nihilumbra, but if you have the endurance they’re in there, waiting for you.