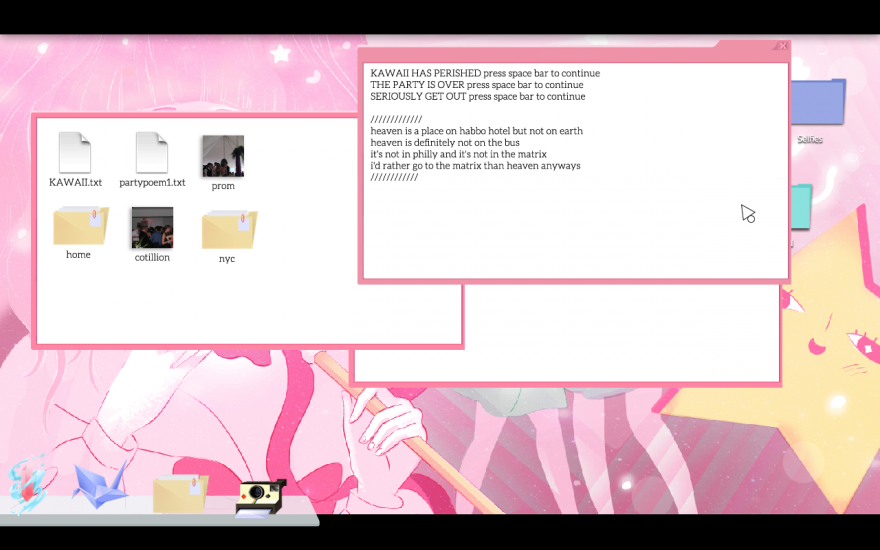 “Let’s just private chat. I’m sick of all these fuckers in the main channel.”

These are the first words exchanged in Cibele, Nina Freeman’s autobiographical vignette game about meeting her Final Fantasy Online boyfriend in the real world as a teenager. In between these words is a world you may not know. A world usually kept hidden, with tricky yet exhilarating social mazes. A world that makes your skin hot, but feels distant at the same time. A world that gives you that squirmy, swooping sensation in your lower abdomen. It’s the world of a young girl discovering herself through the colorful desktop of a Mac computer, and the people who live inside the bouncing icons on her screen.

By opening each folder on the desktop, you collect another scattered piece of Nina. Through her poetry, you come to understand this is a girl who takes herself only just seriously enough. Through her wallpaper, you learn she likes to daydream. Through her selfies, you see her transform and come into herself, nixing a pair of glasses for contacts, turning brown hair into pink. In an odd way, she is you, a person transforming through the glare of a screen, opening the doors to a new world through the comfort of a computer chair.

In the online world of Valtameri, you meet up with Ichi, whose first words to you create the instant dichotomy of Them versus You and Him. Immediately, he separates you from the rest of this virtual world, deeming you the only bearable human being in the whole network. Hidden beneath the simplicity of your first exchange with Ichi is this oscillating power dynamic: a mutual but not equal respect. While killing low-level creatures together, he mutters “whoa, nice move” under his breath—always with that air of surprise. The wordless vocalizations are the most telling in the conversation: with Nina’s usually more treble voice coming in vocal fried and pitched down to a serious growl. You do that naturally as a girl. To try and make yourself sound more like “one of the guys,” or at the very least one of the more valued players.

every exchange reminds you of your otherness in this world

You like Ichi, but you’re not sure why. He tells you that you’re different from the others. Special. Sexy, even. This makes you feel valued, but his validation goes beyond just tapping into your insecurities (though even that already gives him an exorbitant amount of power). More than that is the sense of belonging, of being accepted into a world that is very clearly established as belonging more to Ichi than to you. Almost every exchange reminds you of your otherness in this world. Another jealous online guy friend tells you to stop hanging out with Ichi because he’s an ass. “Not to me,” you say. Of course not to you, he answers. “You’re a girl.” Ichi himself even confirms the special treatment, admitting that he’d never yell “at a cute girl.” Subtly but surely, you are kept at bay from being truly accepted through the guise of flattery.

… But you are young. You want to belong. You like the way Ichi makes you feel so exposed, like he’s there in the room with you or really there next to you in a virtual fantasy world.

Interspersed between your sessions on the desktop are FMV sequences depicting Nina in the real world. There’s an almost Lifetime Presents: She’s Too Young vibe to each video, as a wide-eyed girl sits before a computer screen, half naked, hands gripping the mouse. What breaks the stereotypical victim portrayal of a poor, hapless young girl on the interwebs are the shots that insist on the humanness of Nina’s experience. Who hasn’t turned to the mirror with the prospect of sending a sexy picture only to lift up their shirt, sigh in exasperation, and reach for the camera anyway.

By experiencing Nina’s position in between othering and acceptance, you see more than just the gender politics of cyber sex and online culture. You see to the person being denied full personhood in a space she clearly loves. Unable to fully comprehend it, wrapped in the whirlwind of emotions, we feel Nina’s inner conflict as our own, with all its highs and lows, its gloriously simultaneous sensuality and awkwardness.

The author of this article played a preview build of the first three chapters of Cibele. You can keep an eye out for the game’s final release very soon through Nina Freeman’s website and Twitter.