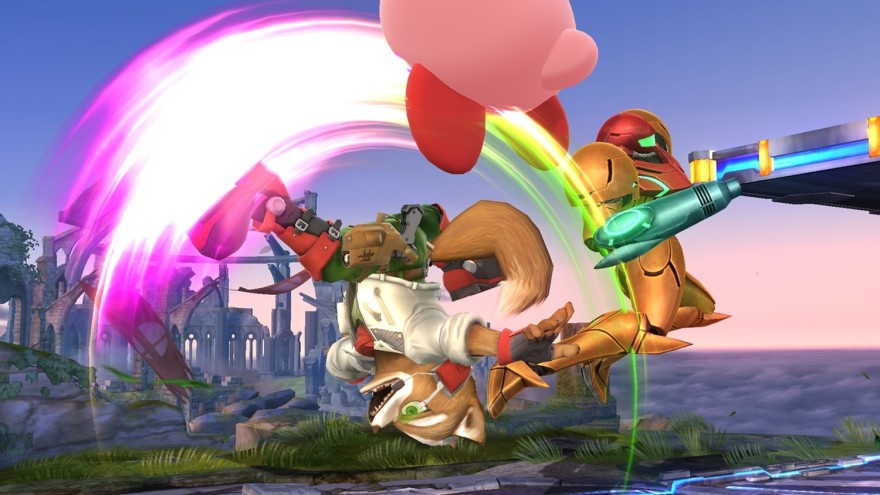 Nintendo’s perspective has always skewed left of reality. Even before getting into modern videogames, they pushed for unreal experiences. Early amusements, like 1973’s Laser Clay Shooting System, gave the satisfaction of shooting down clay pigeons using only electronics and light. Their long-standing mascot, Mario, is a plumber from New York the way Godzilla is a lizard shot through with radiation: the logistics matter less than the results.

The Electronic Entertainment Expo is going on right now in Los Angeles. Each of the main platform holders traditionally gives a live press conference to make announcements and reveal new games. Last year Nintendo decided to live-stream a pre-fabricated video instead, a choice that to some felt like waving the proverbial white flag. Sony and Microsoft both had their beefy new machines to unveil; the prevailing wisdom held that Nintendo would side-step, reluctantly if not gracefully, and allow their competitors center stage. The announcements that followed—relatively safe sequels in known franchises—seemed to bolster that opinion.

So when they announced months ago they were not crawling back to the E3 stage again, with the intention of showing another video in place of a live presser, the familiar voices called out: This is another sign of weakness; the Wii U’s days are numbered; Nintendo doesn’t have the stomach to fight with the big boys.

The Nintendo Digital Event started at 9 AM Pacific Time on Tuesday. On computer monitors and television screens streaming the video across the world, the first image shown was of a press conference stage molded in clay. Reggie Fils-Aime, rendered in claymation, steps to the center as an announcer flubs his name.

“And you guys thought we wouldn’t have a press conference,” Clay Reggie starts off, adding with a shrug, “Not my problem.”

A quick back-and-forth with claymation E3 generic game journalist results in Reggie eating a fire flower and tossing fireballs at the bearded badge-wearer, setting him alight with pixelated flames. One could question the passive-aggressive tactics of a company destroying a fictional representation of a media member; one could also consider the emotional drain of running a company constantly bombarded with flippant requests and jejune derogatory remarks. Let’s call it a push and move on.

But what happens next is a firm response to the worrywarts who questioned Nintendo’s lack of live stage show. The video now shows Satoru Iwata standing in darkness, chin down, faint light outlining him from above. Reggie Fils-Aime (now in the flesh) stands across from him, his face a frightening visage, eyes open and murderous, pockmarked cheeks giving his skin the look of a dusty battleground’s mortar-blasted soil. The two run at each other. This is the East vs. West inter-company stand-off many have suspected to be bubbling behind closed doors. Nintendo’s ship has slowly taken on water, the past financial year their third in a row in the red. Tensions must be high. Then we watch the COO of their American branch uppercut the President of the entire company, the short Japanese man flying off into the air, then righting himself as he lands, ready for more.

This is all prelude to footage of Super Smash Bros. for Wii U, which they decide to play in lieu of further roundhouse kicks. And the faux-kung fu wasn’t just for show. It was a subtle hint at the coming announcement: Mii characters can now fight alongside established Nintendo characters like Samus and Link in the Smash Bros. arena. During a normal press conference, the same video package could be shown on the big screen before revealing the two head honchos playing the game. But to what end? We, the players at home, still see the game we now want to play. The media, in their hotel rooms, will still be able to demo that same game and report back with detailed accounts.

But Nintendo knows that “reality” is sometimes better than the real thing. When Mii Iwata lands the finishing blow on Mii Reggie, NOA’s big whig goes flying off into the darkness. In Nintendo’s world, Japan is king, and reality is an ugly canvas. Why create another Chicago when you can explore Hyrule? Why talk on a stage if you can deliver something else entirely?

Of course, the proof is in the games. Video or press conference, livestreamed or in-person, any announcements are all just burnished glimpses at works-in-progress. The delivery method for those announcements should have little bearing on whether the games shown capture your attention. Later that evening, Nintendo will hold a live Super Smash Bros. tournament in the same space they could have set up their conference. It’s a telling, and smart, choice. I can’t see Nintendo returning to a live press conference in the future. They clearly enjoy doing it their way. And isn’t that the point? Fils-Aime said as much in the video himself: “At the end of the day, Nintendo game creators share one belief: there’s nothing wrong with having a little fun.”