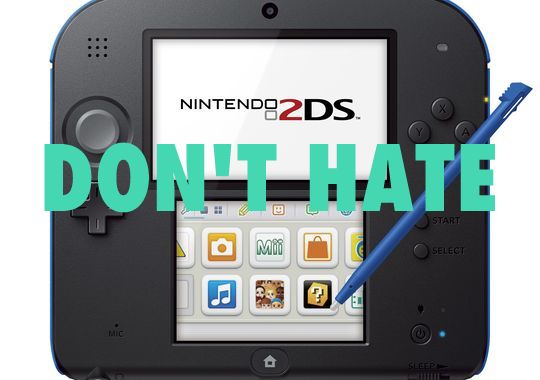 The wrath came hot and immediate. Thousands asked, or wondered silently, “Is this a joke?” Someone compared Nintendo to an ex who’d become sick and confused, a degenerate you want to help if only out of some long-expired feeling of love. Someone else called it a crime against humanity.

What looked like a typo a few days ago now exists as a wholly functioning device.

The target of this widespread scorn is the Nintendo 2DS, a new version of their handheld that strips out the 3D visuals and lays out the two screens, pads and compliment of buttons on a solid slate, removing the previous clam-shell design. What looked like a typo a few days ago now exists as a wholly functioning device, to be sold for $129.99, geared towards a very specific demographic. Since the 3D visuals available on the 3DS are recommended for ages seven and up, Nintendo of America President Reggie Fils-Aime told IGN: “that creates an opportunity for five-year-olds, six-year-olds, that first-time handheld gaming consumer.”

If Nintendo’s appeal to a widening, broad mainstream audience feels sometimes like swinging a mattress to knock in a nail, the 2DS is a heat-seeking dart, a pixel-thin laser pointed directly at your five-year-old’s still-developing cornea. And that should tell you two things: 1) they continue to develop and market products deaf to the vocal minority who guffaw at their idiosyncratic approach; and 2) our children, nieces, nephews and grandchildren have never been bigger targets for the calculated assault that is modern entertainment. Whether this concerns you is a matter of taste.

But what grand, audacious ambition! A global company fears its present portfolio squeezes out two years of their potential audience. And so they remedy the situation, devising a system that’s safer (to waylay concerns from skittish parents), sturdier (no broken hinges), and cheaper (always a plus). The result at first looks ridiculous, then comical, then brilliant. Then devious. By the time you realize their intention, releasing the new “entry-level” system alongside Pokemon X and Y, the 2DS stands as the most singularly evil thing the company has ever done.

Of course, there is nothing wrong with giving people what they want, even if they didn’t know they wanted it. Predictably bizarre might skew closer to the truth. For some reason, the afternoon of the announcement I couldn’t stop laughing. Part of this was gut reaction, the same seed from which all these ill-judged quips are born. But the giggles stemmed less from thinking the 2DS hideous or uninformed—a part of me finds the shape and simplicity quite desirable—but because Nintendo succeeded again in simultaneously confusing thousands of industry-observers while catering to and pleasing millions of future customers.

The 2DS is certainly new, unique, and different.

“We’re always thinking about what we can do that’s new, unique, different, and brings more people into this category that we love,” Fils-Aime said. The 2DS is certainly new, unique, and different. It’s that last descriptor that gives me pause: Love. This category (being videogames) that we (being Nintendo) love (being an admission of extreme prejudice, unerring support and blind faith). Love is messy. Love is hard to trust. Love makes us do things we wouldn’t normally do, things we don’t always admit to doing. Nintendo both urges and transmits this specific kind of love, the kind that embarrasses as well as embraces. Like Disney, they grab us in childhood and don’t let go. Some of us shake free. Others don’t. But emotions are like memories; they never fully go away and can be rekindled by the slightest of cues.

When questioning this decision, the aforementioned commentator compared his feeling to a sad kind of misplaced love, like sand that seeps slowly out of a broken bag. A few granules always remain behind. But Nintendo is flipping the message. Their games, the story they’re telling goes, are a product of their love, not only to the medium but to us. The concept is ludicrous: They’re a company, a faceless consortium of thousands, a series of off-white buildings in over a dozen countries.

… and so we turn on this strange thing, not company nor friend but capable of being both …

And yet we respond as if they acted as one, some kaiju that feels pain, admiration, loyalty and respect. That feels the sting of incisive retort, or the blunt force of a thousand Facebook Likes. To be sure, this decision, to develop and release a handheld exclusively for 5-6 year olds, is a calculated risk, motivated not by a reciprocal kiss on the cheek but the prospect of millions of dollars. The contradiction confuses us. And so we turn on this strange thing, not company nor friend but capable of being both, and like middle school bullies we call it names because that makes us feel better about ourselves.

As a community we love to hate. It fills our communication channels like noxious gas. Even moments having nothing to do with us require an automatic, dismissive take-down. The Nintendo 2DS is but the latest victim of a time when flowers and candy are not seen as a kind gesture but a mere set-up for later screwing. So let’s all just calm down. Sometimes a rose is just a rose. Unlike other, less subtle romantic gestures, it might take awhile to understand.