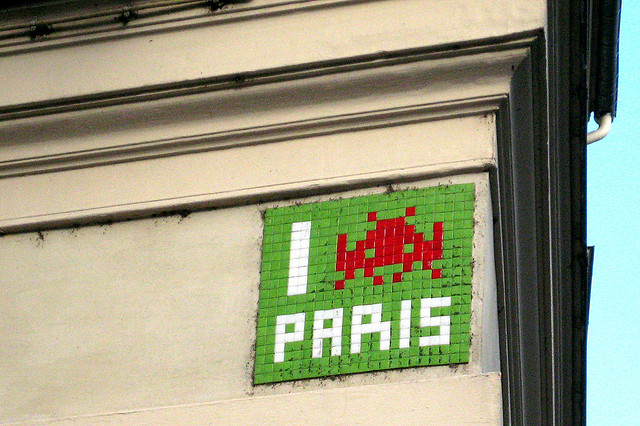 Between August 2003 and July 2004, I spent a year living in northern France as an au pair. (Think “The Manny.”) My charges, explosive as C4, were six- and eight-year-old boys born to an American mother and a French father. They enjoyed the usual distractions of youth: bike-riding, judo, threatened disembowelment of their live-in babysitter. The older one also played videogames. For his birthday, he was given a shiny Nintendo handheld, passed down but new to him. He exclaimed with joy in the family’s typical English/French hybrid speech: “Merci Maman! Thank you for the Game Boy!”

The French do love them some Nintendo.

Yes, sweet Maxime spent his car-rides playing 1989’s Castlevania: The Adventure. I remember playing the same game on my own Game Boy (okay, it was my mom’s: quite the Tetris fiend, she was) nearly fifteen years prior. I would see similar acts of time-travel throughout my stay: the tight spandex at the gym, the preponderance of smoking, the reliance on windmills. The Old World might not be behind the times; they just prefer how it was.

This climate helps make sense of Nintendo’s latest financial results, reported last week and explained by President of Nintendo Corporate Ltd., Satoru Iwata, in an investor’s briefing on Thursday. Out of every market territory, France was the single country where Nintendo gained more momentum in 2012 than in 2011.

The obvious question: Why? Solving the riddle might help the company worldwide, their sales in a slump everywhere but their home country. Iwata did not know the reason, but the Top Twenty selling titles in France offers a distinct possibility.

Just like sweet Maxime, much of France seemed content with buying and playing older titles. Two of the top eight titles, Mario Kart 7 and Super Mario 3D Land, came out in 2011. Even non-Nintendo titles benefited from the extended attention of French players; Call of Duty: Modern Warface 3 and FIFA 12 both released in 2011, as well. Along with Just Dance 3, a full one-fourth of France’s best sellers spent over a year on the shelves while still keeping pace with the latest and greatest.

“Merci Maman! Thank you for the Game Boy!”

So what’s the secret? How can Nintendo gain momentum in a country while selling evergreen titles in such droves, where other markets ignored their back catalog, focusing on flashier, newer models? In a word: Passion. The French are nothing if not passionate. In James Drever’s Dictionary of Psychology, he defines Passion as such:

Used by the older writers for emotion in general, but now reserved for violent emotional outbreaks.

Does that phrase, “violent emotional outbreaks,” not describe the software launches in America and elsewhere? Blockbuster games do huge business their first week and tale off like a lightning strike. But in France, those connoisseurs of the old, where an aged stinky cheese is to be savored and not thrown out, where passion is but a daily emotion and not some pent up eruption, gamers found excitement to spare for last year’s dance game, last year’s kart racer, last year’s brilliant 3D Mario.

The answer to Nintendo’s lagging momentum, then, can be pinned to a country’s patience. Because nothing stirs a lover’s frenzy like heated anticipation.

Unfortunately for Iwata and Co., and any other game company looking for a spark, cultures elsewhere require their thirst slaked immediately. Legacy titles can’t be counted on to boost a flagging portfolio. Unless, of course, you’re gaming along the Seine. In that case, I hear there’s this crazy new game about Pocket Monsters…  could be huge.