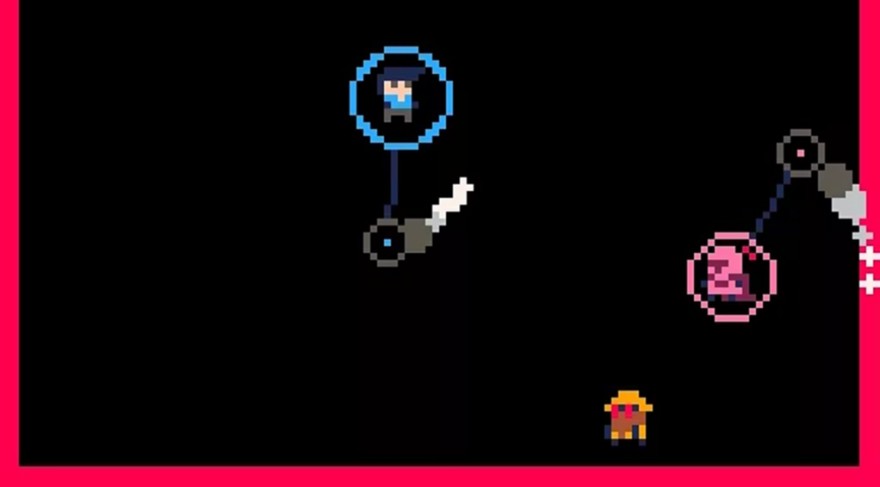 Playing videogames is overrated. This is, I’ll grant you, not a position that videogame writers tend to take. In varying measures, we are known to value continued employment, professional relevance, and the grudging tolerance of our readers. There are, however, pleasures to be gleaned from videogames even if you don’t play them.

Damian Sommer’s Nite Fite, which was created for the most recent TOJam (Toronoto Game Jam), is a perfect test of this theory. The game, which has all the trappings of an early 8-bit videogame, plays itself. Four abstract characters start in their own corners and swirl weapons in progressively larger radii. Hit another character, and that character dies. The longer a round lasts, the more the absurdly catchy music builds. For what it’s worth, the last character standing wins. The extent of your involvement is starting a new game and deciding when you’ve had enough. That’s it.

In both functional and aesthetic terms, Nite Fite most closely resembles the screensavers that served as an important source of computer entertainment in the pre-YouTube days. There was the one where pipes snaked around the screen until they had taken over all the real estate, like an NPC version of Snake. There was also the one where a ball bounced around the rectangular computer screen, producing patterns reminiscent of Nite Fite. There, too, the only real user input was in moving the mouse to end the performance.

There are many different ways to watch videogames. The most common forms—esports and let’s play videos—are in large part about the human element. The variance between Twitch streams or YouTube clips is overwhelmingly attributable to choices that players make. You are watching a videogame, to be sure, but the unique product here is human. In Nite Fite, however, you are really watching the game, so much so that you have to ask whether it’s really a game at all. I would submit, however, that there are enough choices here to qualify Nite Fite: you choose when it starts; you choose the win condition; you choose how much you’re willing to put up with in the name of a longer run. It’s basically a game, only you’re not doing the grunt work.

You can play Nite Fite on itch.io.