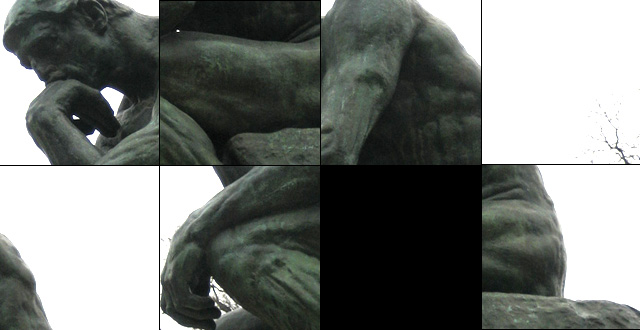 If you can’t beat them, join them. That seems to be the sentiment of Machinarium, a point-and-click adventure game about a cute robot who saunters around a scrap heap, stumbling into puzzles. Tasks like aligning the dials of an Old World town clock involve simple logic, but are painful to complete. The game’s formula places what is essentially an IQ test between the player and the adventure. For years, adventure games have been criticized for being too logical, requiring players to put their brain in a vice in order to enjoy the story. How do you rectify this inherent problem? You don’t. Developer Amanita Design made the characters and the world machinelike, so that turning dials and pulling levers seem like the natural things to do.

Machinarium might be the most aptly named game ever created. It is literally both a thing and a place about machines. The beautifully drawn, heavily rusted city is inspired by industrial ruins. Its denizens are robots with comedic quirks. What’s more, the puzzles—or gameplay, if you will—are best suited for armchair mechanical engineers. You study diagrams to operate dynamos and alter the circuitry of machines. The parts fit together as well as a piston fits into a cylinder. The only trouble is that a person, namely me, is at the other end, turning the crank. It wasn’t the robotic place that bothered me. It was the robotic system of cause and effect that it was built on.

Academics and game bloggers have a term that covers the mechanical interactions in Machinarium. It is called ludology: a theory that was proposed in 1999 in order to come up with an effective way to dissect games. Ludology is the analysis of the rules that govern the way games work. It’s the calculus of play, and it accounts for the aim of angry birds and stat boosts of paladins alike. This awkwardly formed word is more than academic jargon. It is a pervasive attitude that pushing blocks and clicking on loot are intrinsically meaningful. It places a premium on systems and numbers, while overlooking the things that draw people to videogames in the first place: the lore, the thrill, and the fact that I can ride on horseback across rustic prairies in the old West.

Red Dead Redemption, an open-world game based on Western films, may have the most majestic scenery I’ve ever seen in a videogame, but a ludologist will tell you that the game’s beauty comes down to how your horse’s gallop is tied to a system. They will say that a line graph is a fine way to measure an emotional response to a mob of zombies; and that consciously dripping a flow of dopamine to the player is the best way to engage him.

This preoccupation with the facts influences not only how we think about videogames, but also what they are. So what’s wrong with that? Plenty. In this light, the best games are the ones that are the most addictive. Being occupied is superior to being fascinated. And worst of all, games are robbed of significance. Our experience is reduced to a set of menial tasks—at times mentally stimulating, and often requiring a good amount of coordination, but lacking any emotional weight.

We exist in a curious state, where rules and reason underlie everything we do, but are the furthermost things from our minds, and have tenuous connections to the things that matter most.

While trading white-glove slaps with Tom Bissell over the subject in a series of letters published by Paste, Simon Ferrari wrote of “the medium’s unique ability to create meaning, emotion, and ideas through interaction alone.” The claim sounds convincing, since evidence seems to back it up. After all, the meaningful situations in chess, like putting the clamps on an opposing King, are made possible by the chessboard on which the game is played.

What this view overlooks is the way that people actually experience things: not as a series of moves to be plotted on black and white squares, but as a series of meaningful events—though they probably meant more 1,500 years ago. What matters is that you protect the King, or sacrifice the Queen; that you staved off a ruthless attack, despite being heavily outnumbered. Ludologists overemphasize the cold hard facts, and miss out on what makes the game meaningful.

The problem is, they simply can’t get here from there. We exist in a curious state, where rules and reason underlie everything we do, but are the furthermost things from our minds, and have tenuous connections to the things that matter most, like attending a best friend’s wedding, or falling in love. In college, I fell for a blonde I met in lit class who looked like Nico, and then slowly watched as my naïve misconceptions about love slipped away. I never once considered the role of my physiology and genetic code, because they are found in an entirely different realm from the day-to-day happenings of human affairs.

The rules of the universe and the meaning of the universe are helplessly irreconcilable. While mathematics and computer science can explain all sorts of fascinating details, they can never explain why any of it matters in the first place. This is because meaning comes from culture—the human practices that people do day in and day out for no good reason. What we make of the world is ultimately determined by our familiarity with our habits.

This even applies when we play games. Winning and losing are only defined in their relation to us. Their meaning doesn’t come from an abstract ideal that is buried in the rules of the game, but from our experiences in life, such as witnessing war; or watching Garry Kasparov’s erratic behavior during his matches with Deep Blue; or having once won the emotionally fractured heart of the blonde from class, only to have it crumble in my hands. A game like chess is meaningful because it comments on our wider view on culture—not because placing pieces in a certain position leads to an endgame.

The emotions that most games offer are stunted by a fetish for rules and dogmatic practices.

Instead of thinking outside the box, ludologists get caught up on trying to assemble a jigsaw puzzle that, once put together, forms the Mona Lisa. They cling to the hope that if only their systems were finer tuned, and perhaps based on brain scans, they could, as the developer of Triple Town puts it, “create an emotional, deeply meaningful experience simply by using the fundamentals of system design.” This is precisely the point where logic becomes illogical: when it is held up as the root of meaning and emotion, and the world of culture and human goings-on are seen as products to be synthesized.

This approach is not even backwards. It’s like trying to build a stairway to heaven, or a bridge to Asgard. It cannot be done. Yet to dispute the bright shadow of science puts one in bad company. It groups you with Luddites, or worse yet, narratologists. In videogame criticism, narratology is a dated, and often reviled, form of analysis, which invites jabs and comparisons to stuffy Victorian authors. The grievance is that focusing on the characters and plot and, God forbid, how those elements “make you feel” does a disservice to the systems.

Still, it seems like a viable alternative—until put into practice. The emotions that most games offer are stunted by a fetish for rules and dogmatic practices. Look at Machinarium. The oddly fascinating wasteland of disused machines conjures a whimsical mood, but it is disrupted by the push and pull of classic videogame conditioning: the tinge of agitation felt when stuck, followed by a fleeting sensation of relief when you win. It reduces human emotions to robotic reactions.

When games fail to connect to us, or somehow give us the means to distinguish ourselves from the system, we become just another function. The lines on a sheet of graph paper become prison bars, and we feel frustrated and wasteful behind them. As technology continues its push to fit the world into neat little boxes, there is a danger that we may become trapped inside them too. That place is remote and isolated, and it fails to relate to, or even acknowledge, the world we live in.

This is the first of a three-part series. Read part two and part three.