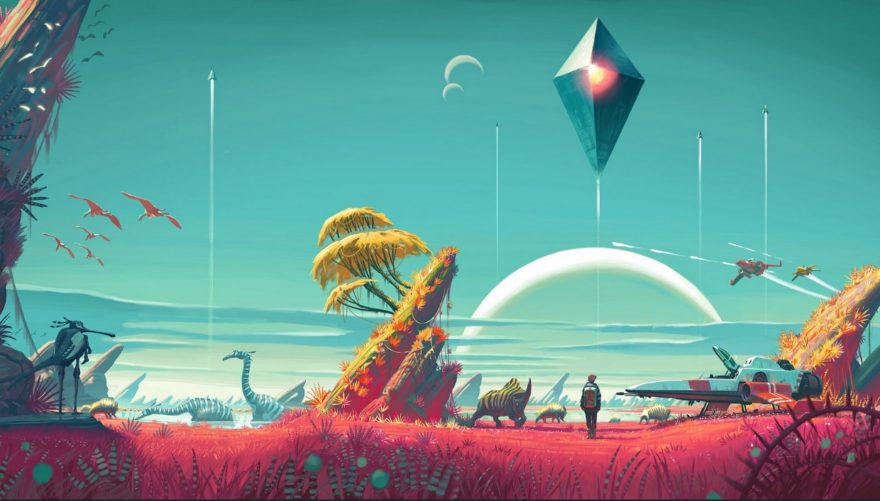 It’s been tense leading up to the arrival of No Man’s Sky, especially if you follow the game’s lead programmer Sean Murray as he occasionally lifts his head from the milieu of computer code to make appearances around the net. “Anyone been to sleep yet?” asks one of his latest tweets. You can see the sleep deprivation and stress in his eyes as he appears in promotional videos, staring blankly at a TV screen with the game he’s been making for the past few years playing on it; the thousand-yard stare becoming more and more prominent with each video. His beard has mushroomed, his hair is shaggy and wild.

It’s probably a good job that Murray and the rest of the team at Hello Games have decided to delay No Man’s Sky a few weeks, then—save this exhausted man’s soul. The game has been slated to come out for PC and PlayStation 4 on June 21st since March this year. But now, in a PlayStation Blog update, Murray writes that the open universe and 18 quintillion planets of No Man’s Sky won’t be delivered until August 9th in North America, August 10th in Europe, and August 12th in the UK (and, as a Brit who works with Americans, I’d like to say that those three days are going to be painful).

“I don’t see mountains and rivers and lakes, I just see the mathematical formulae”

“The game really has come together, and it’s such an incredible relief,” writes Murray, and I can only hope that he actually does feel some relief. “As we sit and play it now, and as I watch playtesters every day, I can finally let myself get excited. We’re actually doing this,” he continues, writing in a manner befitting a man who has finally saw the end of what he perceived as an endless Sisyphean task.

Murray continues: “However, as we approached our final deadlines, we realised that some key moments needed extra polish to bring them up to our standards. I have had to make the tough choice to delay the game for a few weeks to allow us to deliver something special.”

At this point, it’s worth taking a moment to remember where No Man’s Sky even came from. It’s the result of Murray’s mid-life crisis. He had been working on sequel after sequel at EA, and with the independent studio he founded, Hello Games, the pattern was beginning to emerge again—first there was Joe Danger (2010), then Joe Danger 2: The Movie (2012), at which point Murray had become tired and wanted to do something daring; an all-or-nothing videogame formed of his dreams.

Since then, Hello Games has been pulled along by Murray’s vision for No Man’s Sky. A tiny team of around 13 people making what should be the largest videogame world ever made up until now. And it’s all made possible due to complex algorithms and a talented art team. The effort has clearly had its toll on the people sat behind the machines putting it all together. “When I walk around this planet,” Murray said to the BBC last year, “I don’t see mountains and rivers and lakes, I just see the mathematical formulae.” He’s developed some kind of Matrix vision.

That dedication (or obsession) to this dream game has led to Murray becoming the locus of many peoples’ expectations. He’s feeling the pressure and is terrified of disappointing not only the world but himself. “This is the hardest-working, most talented team I’ve ever worked with, and I’m so proud of what we’re doing,” he writes. “For all our sakes though, we get one shot to make this game and we can’t mess it up.” They’ve got players, coders, artists, even archaeologists dreaming big with this game, now they just have to deliver.

Read the update over on the PlayStation blog.