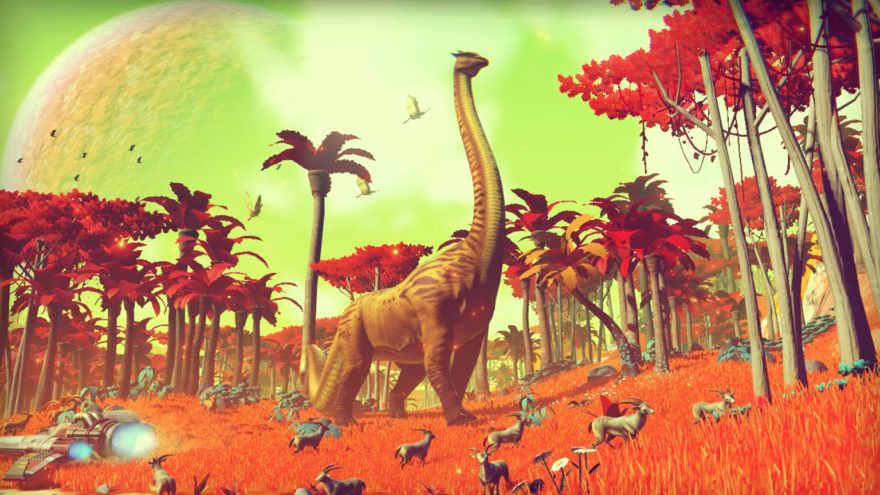 No Man’s Sky has been knocked by players since its release for false promises—advertisements featuring fighting factions, developer interviews that discuss rare occasions where players can meet on distant planets (which has seemingly been disproven), and more. As a result, Sean Murray—the public face of Hello Games—has become a Molyneux-esque icon, a figurehead for what some perceive as the perpetuation of misleading advertising in videogames.

These grievances were realized in a series of complaints to the Advertising Standards Agency (ASA) over the past couple of months. But nothing came of them until now. Last week, those complaints were answered by the UK-based organization, which began an investigation into the storefront for Hello Games’s procedurally-generated space sim.

proving these advertised claims as false isn’t so easy

The specific issues the ASA has with Hello Games (as listed in a Reddit post) are in discrepancies between the videos and screenshots posted on the Steam storefront and the final product. A lot of these complaints surround the three main characteristics of the game in general: the animals aren’t as varied, the structures aren’t as pictured, and the grand space battles don’t exist. But proving these advertised claims as false, as the ASA must seek to do, isn’t so easy in the case of No Man’s Sky.

As PC Gamer found out by talking to a bunch of lawyers on the matter, previous cases of false advertising in videogames have been easily proven as they dealt with “technical absolutes.” In the case of Killzone: Shadow Fall (2013), the marketing claim that the game ran in 1080p resolution was simply a case of collecting hard numbers. But to take that same approach with No Man’s Sky, the ASA would have to see every single part of the game’s procedurally generated universe of 18 quintillion planets, just to find out whether or not the images shown in trailers and screenshots weren’t reflected in the final game.

And even then, the ASA would have to take into consideration that those marketing materials were only showing the “ideal” results of the game’s systems. PC Gamer adds that no trailer or screenshots could possibly show the breadth of what the game offered and that the ASA has to accept that all procedurally generated content is inherently unpredictable. And so, according to the lawyers that PC Gamer spoke to, the most logical and likely approach to this investigation will be attempting to distinguish what’s possible and what’s a certainty in the game. If what was shown in the marketing materials is possible in No Man’s Sky, then Hello Games have done nothing wrong, but if the version of the game that was released doesn’t allow for those possibilities then there’s a potential issue.

No Man’s Sky’s perceived failings, both in terms of advertising and delivering on promises, have been made worse by a rabid fanbase that managed to reach a fever pitch on a game that had not been released. The No Man’s Sky subreddit became an oft-mocked locale where fans would gleefully talk about the game to end all games, talking up a game that did not exist in the final product, let alone in the potentially inflated advertisements. Looking at this, some of the lawyers that PC Gamer spoke to put some of the player complaints about the game down to misinterpretation of the marketing material. Another relevant note that’s made by the lawyers is that anything that Murray said in interviews and on Reddit aren’t considered forms of advertising, and should have no legal sway in the ASA’s decision.