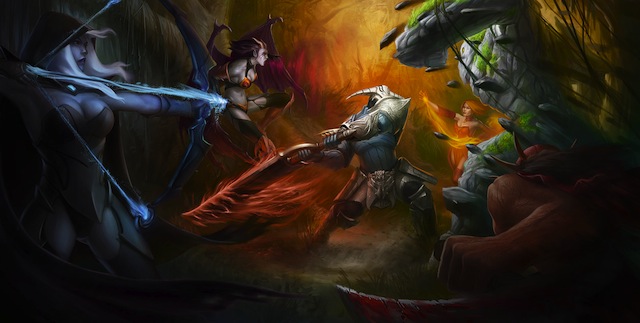 The big question surrounding Valve’s newfangled Steambox controller is how well it will work with games that are designed around the keyboard exclusively. How would a device which combines the scroll-ability of a mouse with the prehensility of a gamepad perform with games like, say, Defense of the Ancients 2, which requires complicated inputs with fingers on keys?

Well, to sum up YouTube user Trial by Games’ experience, this is something no one will ever do. Our courteous content creator seems to have trouble performing even basic maneuvers in this video of him playing the game. You might make the counterpoint that playing a keyboard-controlled game on a controller is the same as playing a controller-game on a touch-screen: it works fine once you get used to it.

But as I was told by Blizzard when talking to them about the process of porting Diablo 3 from PC to consoles, there is a world of difference between the two interfaces. The keyboard and mouse combination is good for clicking things quickly. Controllers are better at making sweeping, rolling motions. Thus, PC’s Diablo 3 is more strategic. Diablo 3 on console is action-y. They’re two different things.

It stands to reason that if the Steam pad catches on we will see games like DOTA being adapted for controller input, which could open up the esport to a broad range of players who’d rather play that way. But at that point would it still be the same game?