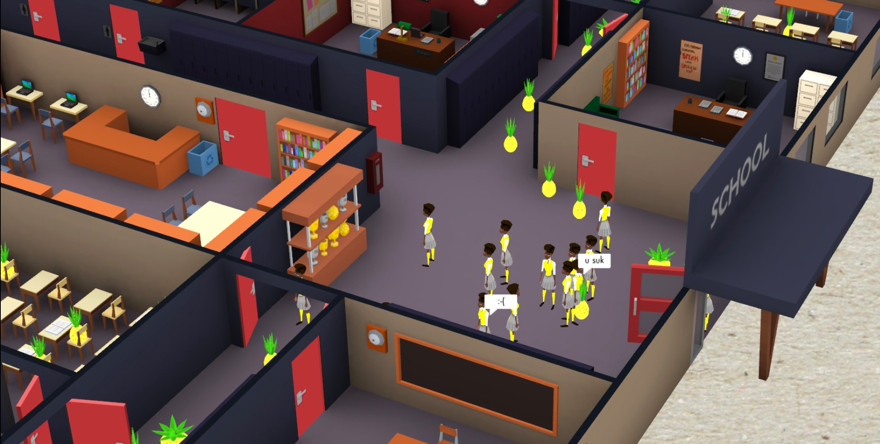 Children are the worst. They have needs and wants and a complete inability to distinguish between the two. Pity the poor teachers tasked with educating these indolent creatures. Their jobs would be much easier if these pesky students lost all of their child-like qualities.

Pupils have been magically transformed into test-taking pineapples.

Subaltern Games’ No Pineapple Left Behind, which just released its alpha trailer, will let you live out this pedagogical dream. You are the principal of a school where, by a magical intervention, the pupils have been transformed into test-taking pineapples. Their prowess in passing exams brings the school money. If left unsupervised, however, the pineapples revert to being kids with personalities and interests that keep them from studying. So what do you, as the principal, do?

No Pineapple Left Behind’s title is a joking reference to the No Child Left Behind Act of 2002. The crueler joke, however, is that the No Child Left Behind Act has proven to be a game in its own right. Rules—whether politicians or game developers impose them—create a series of incentives that shape human behavior. No Child Left Behind established a system of financial penalties and rewards for American schools. Failure to meet prescribed standards would result in reduced funding. This makes some sense as an abstract economic theory, but try telling a teacher with struggling students that the answer is less support. Thirteen years on, it’s clear that a policy designed to foster higher educational standards has encouraged a subset of America’s teachers to game the system.

The most famous example of this phenomenon took place in Atlanta, where eleven teachers and administrators were recently convicted on multiple felony charges after it was discovered that they systematically altered test results. One of the teachers, Damany Lewis, told The New Yorker’s Rachel Aviv “I’m not going to let the state slap [students] in the face and say they’re failures.” This attitude is hardly confined to Atlanta. In 2013, the Government Accountability Office reported, “40 states detected potential cheating during the past two school years and 33 states confirmed at least one instance of cheating.”

Of course, gaming the system can have less criminal meanings. Teaching to tests, for instance, is the logical outcome of a system that puts tremendous emphasis on end-of-year standardized exams. This, too, arguably comes at the cost of forms of learning that are not as easily quantified.

There is very little humour to be found in America’s education system, which consistently outspends much of the OECD only to produce average or below average outcomes as measured on the PISA index. If No Pineapple Left Behind can wring some humour from this political and ethical morass, more power to it. However, it might mean the game only manages to highlight the absurdist status quo.