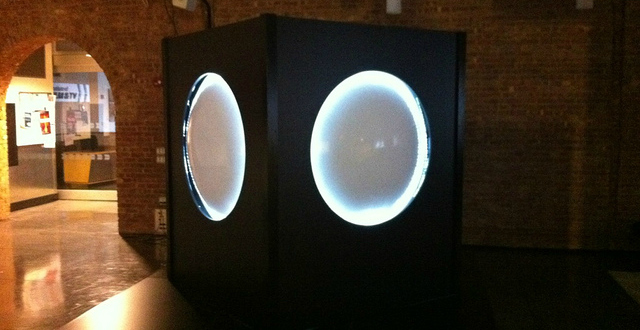 Art shows are probably the worst place to see videogames because they immediately put games into a contemporary art context. And there is nothing worse than a seeing a room full of people standing around next to un-played videogames. Contemporary art settings make us feel like interaction is off-limits (price tags, gallery guides, etc.) whereas videogames beg for interaction.

So why are there so many videogames in art galleries? Why are there videogame shows called “art exhibitions?” On the surface, we media and intellectuals have been pining for art-world acceptance of some sort, trying to fit our Mario cloud pegs into their post-postmodern holes. Meanwhile, actual videogame developers have been just making awesome experiences, ignoring our pithy demands for help in the great validation battle.

NYU Game Center’s No Quarter series ignores the art world and journalists, and focuses instead on gamers and players. Its mission is to “foster the development of creative and groundbreaking independent games […] by commissioning new games…” and displaying them. This marks an interesting turning point in game culture—are we ready to quit pretending we’re baby artists and embrace what is really going on? (Comic books never figured that out…)

This was No Quarter’s second year at NYU Game Center, and the lineup featured indie darlings Terry Cavanagh (of VVVVVV fame) and Ramiro Corbetta (of Glow Artisan fame), along with New York-based Charley Miller and Luke O’Connor (repping Babycastles).

The layout of the show was pragmatic, if a tad underwhelming. You could tell that you were in the lobby of an office area at NYU. With that said, the surroundings aren’t as important as the presentation of the games themselves, and for the most part, the screens were plenty big and the batteries were fully charged.

The first game I played was Luke O’Connor’s Clock, a hyper-minimalist game with one action: avoid the red lines. The player’s white dot advances in a circle along the perimeter of a clock. Red lines appear on the path blocking the way. Points are scored for every second that a player doesn’t touch a red line. As the white dot approaches the red lines, the player can hit “space” and jump their white dot to the other side of the clock. The catch is that there are red lines on the other side too. What appears to be mesmerizing, relaxed gameplay ends up becoming increasingly frantic as time speeds up and red lines appear with more regularity.

O’Connor’s visuals are intentionally sparse. The movement and mechanics of Clock are very tight and responsive. Red lines have an intense quality, both because they feel like warnings and because they serve as the only color in the game. It’s a really smart and precise game that could easily become addictive.

Fans of Terry Cavanagh tend to expect unconventional themes matched with traditional game conventions. At a Distance did not disappoint. What appears to be a standard first-person platformer is actually a two-player puzzle, the spiritual twin to Portal 2‘s co-op mode. One player moves through an abstract world that is ultimately shaped and reshaped by the other, who adds rooms onto the map that the first player explores.

Hard to describe, difficult to understand at first but extremely rewarding, At a Distance is another strong Cavanagh game that introduces a shared sense of delight and infuriation.

Ramiro Corbetta’s Hokra was probably the most fun of the show with four players present. Two teams compete for the “ball,” a black square. The object is to keep the ball in your designated end zones as long as possible. I could go into the careful uses of gaming friction, the great balance between offense and defense; but what you really need to know is that Hokra is NBA Jam for minimalist junkies. It’s hands down one of the best 2v2 experiences in gaming that I’ve seen this year.

Charley Miller’s A Good Player is Hard to Find (above) sounded good as a premise and looked good, until I found it basically unplayable due to technical difficulties. AGPIHTF is not a videogame at all, but a large cube in the center of the room with a white beach ball in the middle. It seems to promise an interesting competitive experience, but as it wasn’t at all playable, I can’t comment too much. Better luck next time!

Lastly, the Winnitron, hot off its grand world tour, was on display with a slew of great indie arcade games. The Winnitron is both past and present of the videogame world. The joysticks, arcade cabinet, and overall vibe are distinctly retro, but the playable games, like the amazing Super Crate Box, are some of the best new games out there. Much like the arcades of old, the Winnitron invites discussion, real-life interaction, competition, and shared experience. If anything hints at where we should go with communal game shows, the Winnitron is it.

That great art debate, stupid as it has been, is finally being put to rest with the emergence of art-house game shows like No Quarter. NYU Game Center isn’t the first place to accept games as they are, but as a well-respected institution, it brings legitimacy to the whole field.

No Quarter is interesting and young. It’s not quite the curated show (as there wasn’t any particular theme or concept to the showings) I was hoping for, but it does represent a step in that direction. The videogame world needs to find its own curated event, much like an art opening, except one where people show up and actually play the games.

Jason Rohrer once told me, “videogames have as much in common with art as films do. And while there is video art, art-house movies are always seen as films first and foremost. What we’re seeing in the indie videogame scene is the birth of art-house games, not videogame art.” That great art debate, stupid as it has been, is finally being put to rest with the emergence of art-house game shows like No Quarter. NYU Game Center isn’t the first place to accept games as they are, but as a well-respected institution, it brings legitimacy to the whole field.

Perhaps most interesting was the show’s curatorial emphasis on “play.” Whether by choice or necessity, all of the usual accoutrements that are associated with artsy things were omitted here. Instead, by encouraging people to just play and experience, No Quarter opens up a distinctly unique vision of videogame-show curation, where audience participation is critical—something that no other medium can claim so passionately.

If what I’m describing just sounds like NYU’s picks for its arcade of the moment, maybe that’s something to consider. Maybe we’ve had our art galleries all along, but our Chelsea was in the shopping malls and cineplexes, usually next to the bathrooms.