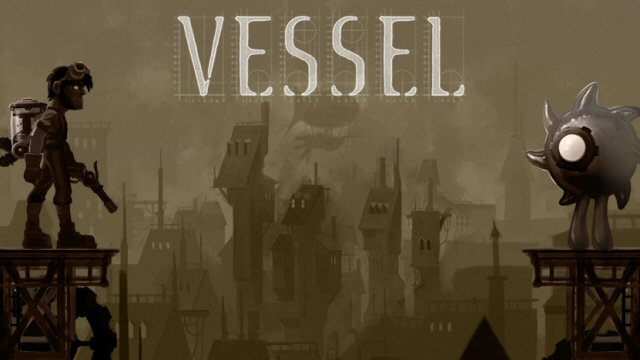 Dramatic irony is what happens when the audience know something that the characters in a story don’t. In Othello, for instance, we all know that Desdemona is innocent, and that Iago is setting her up. We know that, but Othello doesn’t, and his eventual uncovering of the truth is what provides most of the suspense in the story.

Vessel, a stylish, steampunk puzzle platformer by Strange Loop Games, makes use of dramatic irony within the first few minutes of playing. My avatar is prominent scientist M. Arkwright, successful for inventing Fluros–liquid-based, supposedly artificial lifeforms made to robotically serve in human enterprise.

But when I begin the story, one of the cute little guys goes rogue, locking me out of my own facility. Of course I need to get back in, but more than that, I need to squelch the problem.

Immediately what I see is this: a being which has transcended the three Laws of Robotics and has gained sentience. I see a living thing which has outgrown its master, acquired some level of agency, and is rebelling. I see that the master can’t comprehend this. All he sees is a design problem that needs tweaking.

This is the case in every area I have to clear out: the Factory, the Orchard and the Mines. Each area operates like something of a dungeon, with each possessing several rooms of increasingly difficult puzzles based on the properties of at least one of the four types of Fluros found in the game: fire, water, explosive and bioluminescence.

In each area, the Fluros have somehow “malfunctioned.” They have ruined machinery, they have disobeyed orders, they have adapted to the ecology around them, they have built their own societies, constructing nooks and shelters into the environments around them…

For many of the problems I encounter, I’m forced to use a weakness of the Fluro in question against it. Does it need to live in darkness in order to survive? I spray bioluminescent liquid I’ve collected out of my pneumatic nozzle and chase it out of the light. I watch it cower in the dark corner where I need it to stand in order to solve the puzzle. Do I need to make steam to turn on an engine? I make a fire and water Fluro out of seedlings I carry around in my inventory, then lead them obliviously to their deaths.

I learn new information and read Arkwright’s thoughts via a diary he carries with him on his missions. It’s through this that the cognitive dissonance between my actions and what I observe is really reinforced. Arkwright, for most of the story, doesn’t understand that these things are alive, that they are sentient, that they are intelligent and resourceful. M. Arkwright has played god, and for most of the game, his writings are as analytical and detached as that of a lab technician. I wonder why he can’t immediately see what I’m seeing; I wonder why he can’t look into the single, innocently wide eye of a Fluro and feel ashamed for every one he has callously squashed, vacuumed, or exploited for personal gain. When he begins to note these observations in his diary, I almost roll my eyes at how dense he has been, and on many levels he continues to be. Of course they’re alive. I’ve been able to perceive this long before Arkwright does. Quickly, I begin to think of him as kind of an asshole.

But that’s not completely fair: I begin to think I’m kind of an asshole, because I keep playing. One of the most curious aspects of Vessel is the way in which the puzzles compel me to put aside my feelings of sympathy so that I can focus on my task. The Fluros become utilitarian not just to Arkwright, but to me, and sometimes I even become frustrated with them for every solution I somehow manage to bungle or execute poorly. I wonder if these moments are when I truly empathize with Arkwright. I can’t be too critical of this figure I’m controlling: I’m the one committing these acts of abuse and I’m also the one feeling detached as I commit them. All the same, this may just be an inadvertent condition of the puzzle platforming design: perhaps the game hasn’t struck the right balance between the emotional discord I should be feeling and the cerebral focus I’m actually feeling. Because so much of the game is paced according to these consecutively occurring puzzles, and eventually bosses, those emotional moments become dulled slightly by the need to fix factory machinery or clear out a mine shaft.

I can’t be too critical of this figure I’m controlling: I’m the one committing these acts of abuse.

I keep awaiting the sympathetic knockout. I want the game to make me feel truly sorry. But that never quite happens. As the gap of dramatic irony between Arkwright and me narrows and closes –when Arkwright finally suspects that perhaps he’s been on the side of wrong this whole time– the suspense I feel for him to realize this also disappears. But it’s replaced by the desire for a just and proper ending. This whole time, Arkwright has been looking for the proper fuel to run his final invention: the Accelerator. As luck would have it, he has found it in the various liquids to which the Fluros have adapted, which I need to use properly to get the Accelerator to function.

What has he invented this for? I have no idea until I get it fired up. In this way the game inverts the dramatic irony to simple mystery, and up until the end I am excited to see what becomes of this thing. Up until the very end, I’ve had to exploit the Fluros in every way including using their life essence for fuel, and part of me wants this thing to blow up.

But I think I know what’s going to happen.

And Arkwright transcends. He becomes pure plasma –a mysterious kind of organic Fluro matter left behind in each area, which I have been collecting to earn achievements. He becomes one of his creations. This seems like a dream fulfilled, and that Arkwright has learned his lesson.

But I can’t feel inspired by this, because he has only achieved this goal at the expense of his creations. The societies they made have still been wiped out. The nuclei of their communities have all been annihilated. I have committed atrocities…and now what? I become their plasma god? Does Arkwright presume the burden of leading the Fluros after what he’s done to them? How is he still this dense and self-important?

I don’t want to feel rewarded or accomplished at the end of this game. I want to feel punished. I want Arkwright to be punished, and I can’t be sure that he is. I can’t be sure there will be justice or protection for the Fluros. And in a way, this game’s ultimately more tragic because of that than if the facility had just blown up.