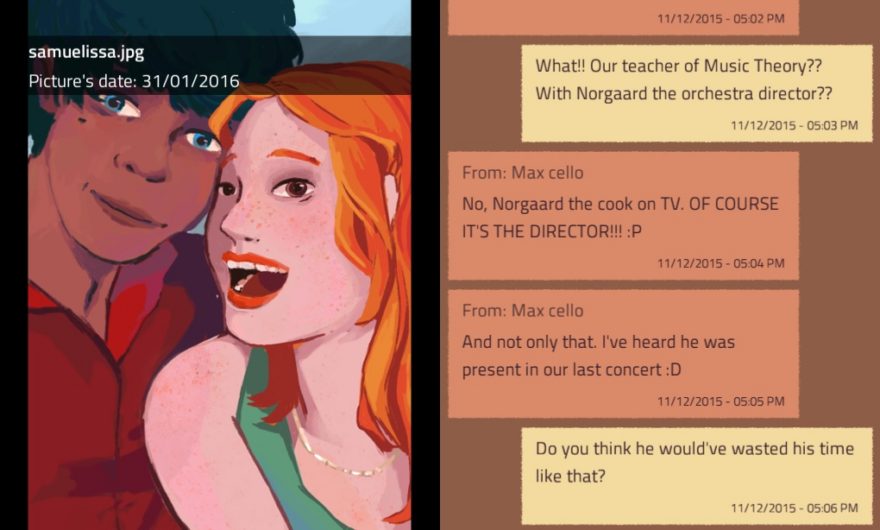 If you’re trying to reach as many people as possible with a game it makes sense that you use an interface they’re already familiar with. Rather than requiring players to learn the ins-and-outs of a new interface it’s probably easier to use one that already exists in their daily life. This is part of the reasoning why Accidental Queens, a three-woman team based in France, chose to give players a convincing recreation of a smartphone to interact with their story in A Normal Lost Phone.

The idea in the game is to explore a teenager’s life through their mobile phone, digging through the secrets left behind across apps, text messages, and photo galleries. In the process, the game touches on topics including coming of age, homophobia, depression, and the perpetual search for oneself. “Real people have real problems,” said Diane Landais, one of the co-founders of Accidental Queens, “we wanted these to be a part of our game.”

This is why she reasons that using a smartphone as an interface was also “unavoidable.” The interface could have been a laptop, a social network account, or an email inbox; what mattered was tapping into the instincts we have built in us as modern people to delve into these everyday interfaces. With that combination of intuition and curosity, Accidental Queens is able to embed a story into the digital space and trust the player to dig it out. That there’s a story in there to be found at all also feels realistic according to Landais. “Every phone tells a story, the story of its owner,” she said. “It’s just not a story that can be told, nor is it a story that can be seen. It’s narrated by whoever gets access to the phone, and is shaped by the way this person sees the world, by their habits or prejudices.”

Accidental Queens isn’t the first to see the storytelling potential in digital interfaces. In fact, the team was inspired by designers who paved the way such as Nina Freeman and Christine Love, who both explore what Landais refers to as the “digital life as a narrative medium.” A couple of Freeman’s games that fit into this idea are Cibele, which explores a relationship through an online multiplayer game, and Freshman Year, which recounts a night of abuse through a smartphone. Love’s games, including Digital: A Love Story and Analogue: A Hate Story, use computer interfaces and emails to unfold dark mysteries about transhumanism, politics, and cosplay.

It’d be amiss to not mention the recently released Sara is Missing too, which is essentially a modern adaptation of the found-footage horror film, but replaces the camcorder with a smartphone. It’s not an inspiration for A Normal Lost Phone given that it came out several months after the original prototype was made and released as part of the Global Game Jam 2016 this past January. But it goes to show that there’s a growing interest in telling stories through the digital interfaces that surround us.

it is “something we don’t see often enough in games”

Landais has a theory as to why that might be the case. Other than the familiarity and realism these interfaces can provide, Landais credits them for allowing designers to explore the various identities of a character: we can see how they interact with friends, with family, with strangers online. “Talking about important, personal topics lets us create a complex and intricate landscape of emotions and interactions between the characters, a perfect setting for a narrative-exploration-investigation game,” she told me.

It’s one of these personal topics, one of the main aspects of the character’s life, that A Normal Lost Phone really leans into. Saying what it is would spoil the game, but suffice to say that, for Accidental Queens, it is “something we don’t see often enough in games, something we took as our duty to explain and portray as best as we could.”

Accidental Queens are currently still working on A Normal Lost Phone with a few collaborators, turning the game jam prototype into a bigger experience that should be out in early 2017. Compared to the prototype it’ll have new puzzles, new apps, a bigger narrative, a visual overhaul, an original soundtrack, and will be translated into several languages.

You can find out more about A Normal Lost Phone and pre-order it on its website. It’ll be available on smartphones and PC.