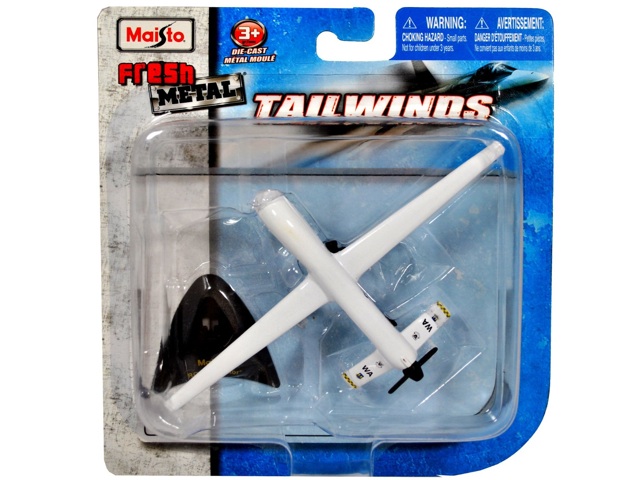 The sad fact of the matter is, like the AR-15, the RQ-1 Predator and “drones” in general have achieved a notorious cachet. That’s why you are reading this article about a 1:97 scale, die-cast toy version of the winged death-machine — currently out of stock on Amazon. That’s why I’m writing it. And that’s why two hundred facetious reviews can be found on the product page. It’s our own glass bead game.

It’s unclear whether the tiny unmanned aerial vehicle is intended as a toy for children or as a model for cretinous adults who would place this sort of thing on their mantle next to their Camp X-Ray detainee figurines. Maisto, the company who produced it, makes both bright, twee toy stunt cars and highly-detailed models of vehicles, ranging from stock cars to Harleys.

Naturally, that hasn’t stopped online shoppers from commenting in the form of bitterly ironic and scathing customer reviews. “WAY more awesome than that Due Process game,” proclaims Alex Mclaren of the UK. Meanwhile, a reviewer who simply goes by Max helps out the company with their sales pitch:

To bring you into the 22nd century, we will now enjoy launching this adorable miniature replica of a lovable sinister killing machine — at your friend’s heads! To make it more lifelike, we’ve taken into account that a lot of the victims are children.

This toy will give your son hours of fun and perhaps even inspire him to grow up and work in Washington, so he too can play first-person shooter games with real people!

Oof! As a guy who plays, writes about, and spends way too much time thinking about videogames, I could find that last comment offensive — that is, if I hadn’t played Call of Duty: Black Ops 2 last year and was able to, at the tap of a button, call drone strikes on insurgents in thawb gowns. I’m not here to denounce Black Ops 2. We’ve already done it. Plus, despite the moral objections the welled up in me as I played, I believe the game has merits as a piece of entertainment. At least I was entertained.

Though this is not an argument to dissuade your conscience, it’s important to keep in mind that games and even toys are a reflection of our culture, which, like it or not, is overtly military. Sure, it can be helpful to think about the message of violent games and drone toys, but in the context that they are like the scaling of a bad sunburn, that can be picked off and inspected on your fingernail. Not as the underlying source of the problem.

Still, reading these Amazon reviews is more fun than an episode of The Daily Show, and I definitely recommend it.