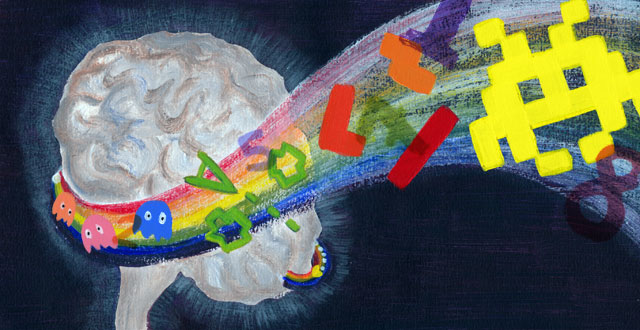 You may have noticed that Kill Screen has started running reviews. We realize now that some explaining is in order—in FAQ fashion!

On why we’re running reviews

We certainly appreciate the fact that you like Kill Screen at all. When we started the print magazine, we talked a lot about the types of stories we wanted to see. One of the things that print does well is long-form, evergreen content. That means essays, reported pieces, fiction, and the like. We were firm believers that the content should fit the form. Twitter has its own writing conventions, as does Facebook. And of course, the web privileges certain types of things over others.

One of those things is reviews. Even though they’re broken.

On why game reviews are broken

You’ve heard it all by now. Game reviews are buyer’s guides. Critics tick off a checklist of graphics, sound, “gameplay,” and if you’re lucky, story. The final rating gets run through the sausage factory at Metacritic; and if you just want to tell the hits from the stinkers, Metacritic is the only source you need. Well, that, and your friends—whom most of us trust more than the critics.

But reviewing games isn’t easy. A short game lasts five to 10 hours; a long one, like World of Warcraft, never ends. The early debug build is not the same as the disc that hits stores, and a month later, a patch or an expansion will change the game yet again. And some of the most important games of the year catch fire when they’re still in alpha. (Minecraft, anyone?)

There’s a common belief that game reviews should be objective, thorough, and fair; and yet those goals are terribly out of reach—and reaching for them cripples us, as critics.

Never mind how many hours it takes to “finish” the game. You and I may reach the same ending, but we’ve had vastly different experiences. You used the sniper rifle; I favored grenades. You care about the side quests; I skipped the cut scenes. You flirted with Leliana, and I got dumped by Alistair (and will never forgive him). And as for multiplayer—how can we compare notes on that? My friends are terrible at Left 4 Dead. But is that Valve’s fault?

There’s a common belief that game reviews should be objective, thorough, and fair; and yet those goals are terribly out of reach—and reaching for them cripples us, as critics. So what good are reviews?

Reviews can represent a snapshot in time, that moment when a piece of technology and art finds human meaning. Let’s treat reviews as ends in themselves, not as means for making smarter choices for buying new product. Our lasting contribution won’t be solely in recommending new and exciting things (although we will do that, too). We hope you’ll seek out Kill Screen reviews because, like a beautiful print magazine, they’re nice things to read. If we succeed as critics, they will also give you insight into games.

We talked for a long time about whether to use some type of scoring system. We tried to avoid the hard constraints of numbers or stars. (Ask us about the color scale idea sometime.)

At the end, we chose to use a numerical score. People expect numbers. It’s the nature of the beast. To be clear, the scores are not the guide; they are our guide. We’re not asking you to make purchasing choices based on our scores; we’re not trying to sway Metacritic; we’re not trying to destroy your favorite franchise. We think the exercise of rating things can be meaningful in and of itself.

Industry-wide, review scores are hilariously inflated. A mediocre game should not receive a 7. It should receive a 4 or a 5. The aggregate quality of games should look like the Pareto principle: very few amazing games, and very few terrible ones. Most everything else should fall somewhere between a 7 and a 3.

On what we’ll review

Big games, small games, art games, street games, Facebook games, mobile games, the games you play with your kid in the backyard. If it makes us think, feel, and act, we’ll cover it.