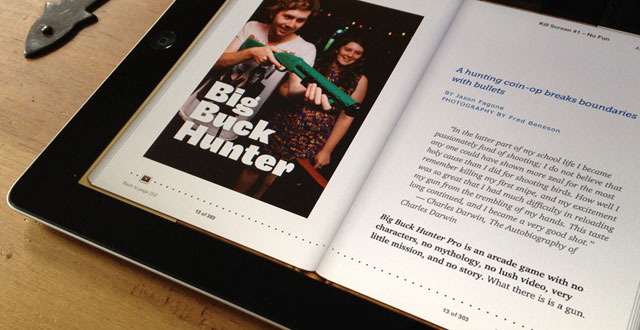 This design reflects two principles we think are important: beauty and clarity. We think it’s both beautiful and clear (many thanks to Jeremy Borthwick for the design and Jake Elliott for all the coding), but let’s point out some much-needed new elements. The home page now gives a breezier look at recent Kill Screen features than that blasted old slideshow. To the right, Killian calls out the week’s leading headlines. Listen to him!

The archive is much more thorough and navigable. As we re-tag the articles in our database, you’ll be able to browse for interviews, profiles, reviews, specific recurring columns, and so on. There is also, finally, a list of everyone who’s ever contributed to Kill Screen online. Find that in the archive, too, and read through your favorite writer’s work. If you’re still not sure where to start, we have a section of Editors’ Picks that we’ll be updating now and then. Below each feature is a selection of related articles, so you don’t have to start this process all over.

There are also comments! You can write comments. Did we mention you can write things? Please be nice.

To comment on what we’re saying here: We can put structure and edges around our work, but the web is a deeply formless medium. It doesn’t have the helpful limitations of print. We could theoretically publish 5,000 features on Kill Screen every second, if only we had enough people, or wanted to. You could theoretically spend every waking breath doing nothing but reading said features. Of course, that would be amazing, and a tremendous display of your love for us.

Instead, we think boundaries matter, like the front and back cover of our magazine. When we read print, we’re guided by a rhythm and punctuation in the turning of the page and the closing of the book. In the interest of pretending that the web isn’t a mess, we’ll loosely organize each week of killscreendaily.com around a theme: In the last two weeks we focused on intersections between games and sports, and then games and sound. This week, in honor of the release of Mass Effect 3, we’ll have a spread of articles on “space.”

Ebooks. We’ve begun releasing ebooks of past issues, starting with the out-of-print Issue #0 and Issue #1. They’re not PDFs of past issues, but reformatted by Mr. Borthwick for optimum readability. For years, we’ve received word from those of you outside the United States about the cost of shipping, and we hope this meets you with open arms.

KSTV. Not all storytelling happens with words, so we’re starting to experiment with curating video. We were inspired by Liquid Television and its madcap, haphazard approach to video, and so we thought we’d replicate some that with the power of video-sharing site VHX. Press play and see what happens.

Finally, this all brings up a bigger point. All of this talk, like much of what passes for game-journalism rethink, is really about process and not meaning. Let’s establish that process is important to a website because it defines how we interact with ideas. We’ve been excited to allow our writers to experiment with formats like poetry and code.

But experimenting online—with new technology, new ideas about presentation, and new ideas about how writers are allowed to write—is not the endpoint. It’s the common-sense starting point. Like with games, just because an experiment was allowed to happen, that doesn’t make it a success. To put it more bluntly, allowing writers to speak freely does not establish that writers have said something. How we do it is not the point.

The point is what we do. We’re all trying to make sense of games here, as pieces of culture that sit alongside the other things we like: music, film, art, literature, YouTube videos, animated GIFs, and so on. And the reason we write things out is to say things that can’t be said in a new widget, because they are too complicated. It’s easy to take process over meaning—how we frame our writing, not what we are actually writing—when we’re often trained to think like consumers. But we’d like to think the consumer aspect of our site can recede more into the background, like it does when you open the magazine. There’s still a part of every consumer that wants to know why in the first place. There’s a part of us that finally wants insight. This is what we are focused on, and we hope that we can continue to offer it.

Jamin, Ryan, Tom, and the team.