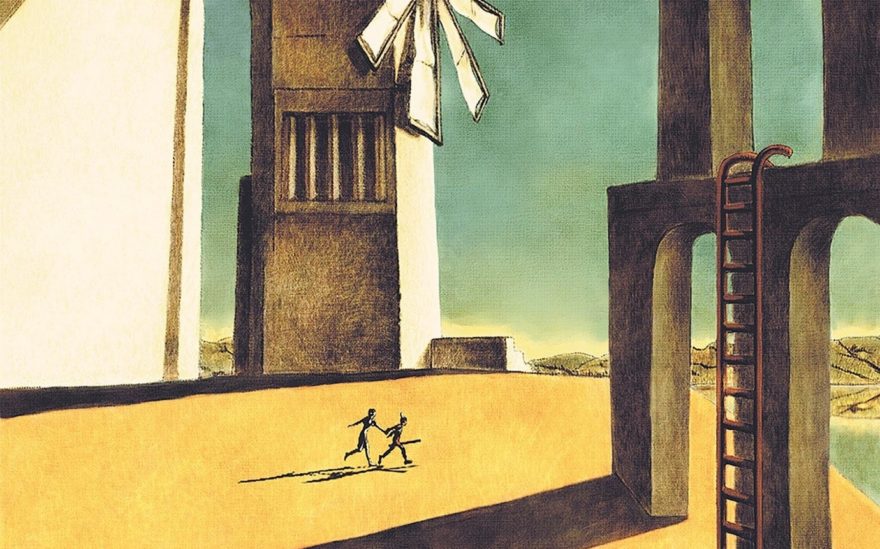 There isn’t a lot of videogame art I would hang on a wall. In fact, to date, there is only one piece of videogame-related artwork in my house, and it’s Judson Cowan’s rendition of Lordran from Dark Souls (2011). Now, I think may have found it some company.

Cook & Becker, an art dealership, is now selling prints of the paintings that Japanese game director Fumito Ueda did when conceptualizing ICO (2001) and Shadow of the Colossus (2005), limited to 500 copies each. You’ll recognize the painting for ICO if you live in Europe or Japan, as it was used as the game’s cover art—America got something much, much worse.

It takes its cues from the stylings of Italian surrealist painter Giorgio de Chirico, in particular his painting The Nostalgia of the Infinite, with its silhouetted couple, yellow landscape, and towering arches. That print is available unframed for $95.

The other print, titled “NICO” as that was the working name for Shadow of the Colossus, is of a painting I haven’t seen before. Cook & Becker give reasons as to why that’s the case: it was never used outside of Japan, where it was only used as the art for a DVD that showed the first in-game footage of the game for people who pre-ordered it.

evocative of the symbolism in the game

It’s similar in style to the ICO painting but lacks some of its finesse in its lines, and the colors aren’t nearly as striking. But it does have a similar subtlety in that, if you weren’t familiar with the game, you probably wouldn’t guess that it’s anything to do with videogames. There aren’t even any colossi in the painting, it instead drawing focus on the central tower and its magnificent bridge, overlooked from a cliff edge.

The detail that stands out is the elegant shadowing of that bridge. The sloping supports are extended in their shadow form by the low tilt of the sun, which is perhaps meant to be evocative of the symbolism in the game: as Wander slays the colossi, he is invaded by a growing darkness, and looks more and more sickly as he progresses. You can grab that unframed for $95 also.

The paintings are available on “museum-grade giclee print” and have hand-penciled edition numbers on each of them. And, as said, there are only 500 of them each. Might be the ideal thing to get before Ueda’s next game, The Last Guardian, comes out on December 6th.