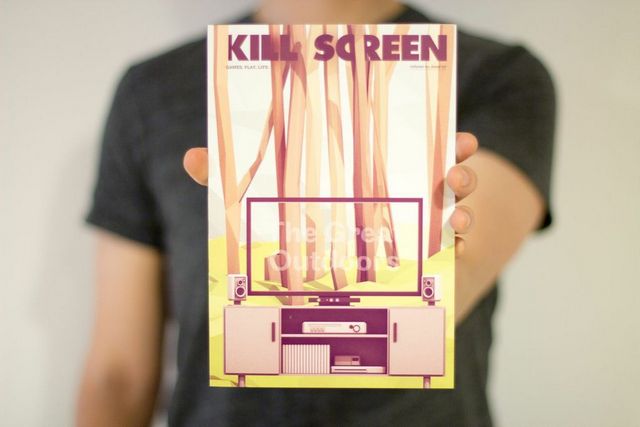 Tl;dr version: We’ve got a great new issue of Kill Screen called the Great Outdoors. Get it here!

A couple of years ago, I had the pleasure of interviewing documentary filmmaker Ken Burns. You probably best know Burns for his work on groundbreaking PBS histories like Jazz and Baseball. (Or perhaps for iPhoto’s “Ken Burns” effect of moving the camera from one corner to another while zooming.)

Burns had just finished his National Parks series and I was asking him about the documentary filmmaking experience. Specifically, I wanted to know if games could ever portray the type of reality that directors like him created on-screen. From the days of Eadweard Muybridge, film has possessed the unique ability to capture life as it was.

Thus, it should follow that games, as an heir to the legacy of film as a visual medium, also shared that potential. His answer thoroughly saddened me. “Games will always be abstractions,” he told me. “They’ll never truly be able to capture the grandeur of the real thing.” Ouch.

Granted, Burns was coming off a serious nature high, and no matter that film itself is an abstraction. (Capturing the majesty of The General or Old Faithful is no less “real” on film than the African outback of Far Cry 2.) But his point was more overarching—and more damning. Games would always be aping a vision of life or creating fantastical, fictional versions for itself. Games would never actually capture a true moment in time and even when they faithfully recreated events, they could be no more real than Civil War re-enactments.

The 20th-century life of games was one dotted with guilt and self-loathing. They were a waste of time, we were told, and pulled us away from loved ones. (And, for Burns, away from the grandeur of parks and wildlife.) I love games, but I sadly accept this fate. Like many who adore games, I am forced to spend more time inside looking out than outside looking in. And with that spark, my exploration into the Great Outdoors was underway.

Where do we begin?

To find our answer, we’ll need to do some sightseeing. We’ll jump from the eaglehunting steppes of Kazakhstan to the handholds of Uncharted’s rock climbing faces to the playful (and nauseous) edges of outer space. We’ll talk to technical directors on the edge of digital verisimilitude, game designers channeling Thoreau’s Walden, and in-game photographers doing their best to capture the beauty and mystery of virtual worlds. By the end, we hope you’ll find some justification for a life spent in front of screens and more excuses to explore the real world in earnest.