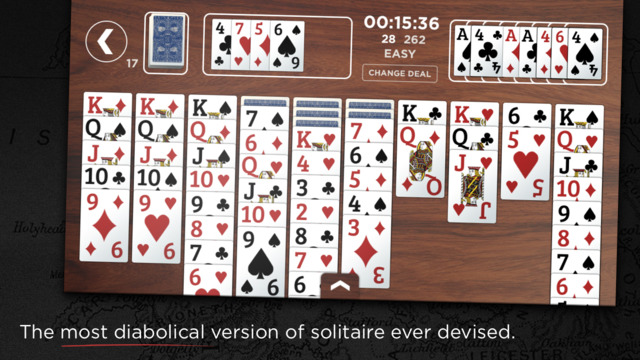 If Churchill Solitaire existed in smell-o-vision, it would reek of cigar smoke. Seeing as the game only exists on iOS, however, identifying the precise stench it gives off is something of a challenge.


The game, which was developed by WSC Software and former Secretary of Defense Donald Rumsfeld, is based on a card game Winston Churchill supposedly played during World War II. This connection is played up at every turn. The game opens with archival footage of the war with one of the British Prime Minister’s famous speeches playing in the background. The levels a player can progress through in campaign mode are based on British military ranks. There is, however, no written proof that Winston Churchill ever played this modified—and more complicated—version of solitaire. The Wall Street Journal’s Julian E. Barnes explains that Belgium’s ambassador to NATO, André de Staercke, taught the game to Rumsfeld, who held the equivalent American position in the mid-70s. De Staercke spent World War II in exile in London, where he was close to Churchill and presumably learned the game in question. Thus, Churchill Heritage Ltd. told Barnes that the provenance of the game is “entirely credible.” Let’s be generous and call the story Rumsfeld is now peddling a ‘known known’.

Churchill Solitaire can be thought of as an exercise in high-level strategic thinking. That’s certainly what its developers would like you to think. With two decks and bonus challenges (including avoiding a card known as the ‘Devil’s Six’), Churchill Solitaire is definitely more complicated than your average game of solitaire. Whether that counts for much is a matter of interpretation. Still, it’s clear what side Rumsfeld comes down on. He told Barnes: “It is a game that requires you to be strategic, to look around corners, to think ahead, and to never give in—which is the phrase Churchill would have used.”

There is, of course, another way of thinking about Churchill Solitaire, which hews less closely to the company line. The sort of strategic thinking Rumsfeld and co. are touting is hardly unique to their game. Most games require players to engage in strategic thinking and there is scant evidence that Churchill Solitaire forces the player to operate on some higher intellectual plane. Would no other game fulfill a similar role? But Churchill Solitaire isn’t as concerned with gameplay as the historic narrative it seeks to advance. The game exists to draw a neat line from Churchill to De Staercke to Rumsfeld to you, the player. It co-opts the player into the sort of hero worship you’d expect from a practitioner of “great man” history. The game is largely a vehicle for delivering archival clips, but Churchill doesn’t need the game’s help and Rumsfeld doesn’t deserve to be labelled a great strategic thinker by association.

You can download Churchill Solitaire on the App Store.