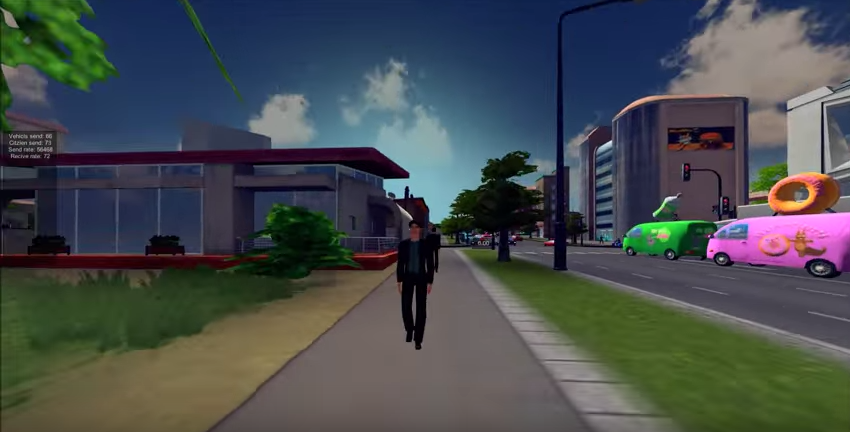 In city builder games, the player is god. No capitalization is called for here: She is looking on from on high, but she is not omnipotent; she must watch human forces desecrate her creations from the heavens above. Most games grant their players agency they would otherwise lack, but the risk of POV-induced hubris looms large in city builders. These are games about building human environments, yet the actual humans tend to only matter on an aggregate level. When it comes to the lives of individual citizens, on the other hand, Orson Welles’ speech from The Third Man comes to mind:

Look down there. Tell me. Would you really feel any pity if one of those dots stopped moving forever? If I offered you twenty thousand pounds for every dot that stopped, would you really, old man, tell me to keep my money, or would you calculate how many dots you could afford to spare?

A mod to Cities: Skylines released this week by a Redditor known as Fr0sz addresses this blind spot by letting players walk through cities at street-level. The mod, which has been likened to a first-person shooter, is the closest you can get to experiencing Cities: Skylines’ virtual metropolises as if you actually lived in them. Judging by this video of the mod, which is a few months old, the results are not entirely life-like, but they are definitely more human:

Many urban projects that are appealing on paper and compelling in photographs fail when it comes to daily use. This problem is indicative of urban planning’s struggle with the human scale or, more generally, human behavior. If a plaza is too big, or too quiet, or too anything, passers-by usually decline to spend their time there. In the spirit of Potter Stewart, city-dwellers know an inhospitable space when they see one. These feelings are squishy and not easily quantified, but the success of public spaces often depends on understanding the finer points of human behavior.

Urban planning has often been used as more of a blunt instrument, less concerned with human scale and niceties than with the projection of power. In the mid-19th century, for instance, Baron Haussmann, who had been commissioned by Napoleon III to renew Paris, carved large boulevards through the city. These boulevards radiated outwards from the metropolis’ centre, displacing all the buildings and people that stood in their paths. As the Auckland University of Technology’s Carl Douglas notes:

By cutting into the body of the city with his boulevards and promoting unimpeded circulation, Haussmann hoped not only to alleviate the social pressures which produced unrest, but also to make the construction and defense of barricades impossible.

If the player in a city builder is not god, she is at least Haussmann. Her power radiates outwards, like tentacles—or boulevards. At a high level, where success can be measures in aggregate term or with reference to whether or not there’s been a revolution lately, this perspective makes sense. But success in cities also exists at the ground levels. Safety, for instance, is not just protection from revolt, but also the ability to walk home comfortably. That’s why Jane Jacobs famously argued that busy sidewalks are the key to safe, vibrant communities. This granular approach to evaluating a city cannot exist in a game that offers a god-like or Haussmannite POV, and that’s why Fr0sz’ mod is so exciting. Cities: Skylines always offered impressive tools to design cities, but there is now a human perspective to counterbalance all this central planning.