Roguelikes, god bless them, have a rap for being inhospitable and dank. They are the Russian winter of computer games, a harsh, ungenerous climate rutted in a quarter-century-old tradition of doing things the hard way.

When word came that Vlambeer and friends were doing a roguelike called Wasteland Kings, I imagined the snow melting. (The title has since been changed to Nuclear Throne, per request of Brian Fargo, who has a trademark on “Wasteland.”) Rami Ismail, one half of Vlambeer, told me in an interview once that they built their name on making challenging games that “could have been made in 1980, but nobody came up with them.” True enough, the roguelike originated in that exact year. Their take on the dungeon hack bolts a twin-stick shooter to the chassis, a combination which has been tried before, but not with Vlambeer’s over-the-top energy.

Nuclear Throne is a celebration of games, and a game worth celebrating, even in its semi-finished state.

In other mediums, we rarely see artists genre-hop, but games allow more flexibility. To date Vlambeer has created a platformer, a shoot-em up, a turned-based RPG, a fishing game, and now this. Most are overtly difficult, and all fall outside of neatly established boundaries. As such, Nuclear Throne only had a few possibilities: a.) The game would calcify into an experience so rock hard that it would crack your enamel, like an overcooked candy apple. b.) Most of the rogue-ness would disappear. It would not inherit the unhealthy pallor of rogue and so many of its offspring.

It turns out the latter won. Nuclear Throne is a celebration of games, and a game worth celebrating, even in its semi-finished state. (It was recently made available on Steam’s Early Access, the service which lets those who can’t wait play along during the development cycle.) Don’t be deterred by the “men at work” sign. Jan Willem Nijman and Rami are constantly pumping out updates, and the game gets better with each. After the last update, I’ve noted that the large maggots seem more active, burrowing under the sand and emerging behind my character, right before I splatter them.

Playing Nuclear Throne feels exciting, rambunctious. The crux of the game, obviously, is shooting bad guys—slugging three-headed scorpions and bullfrogs gurgling nuclear sludge with crossbows, disc guns, cannons, and sentry guns. Their multitudes swell the further you dive, which means it’s only a matter of time before things get out of hand. This is where the game deviates from other great twin-sticks like Smash TV (and the far less-known but equally good Mushihimesama Bug Panic), teetering into rogue country. It’s important to pay attention to the number churn. Wrinkles like preserving ammo and carefully mutating (leveling up) are what will keep you alive in the long run. 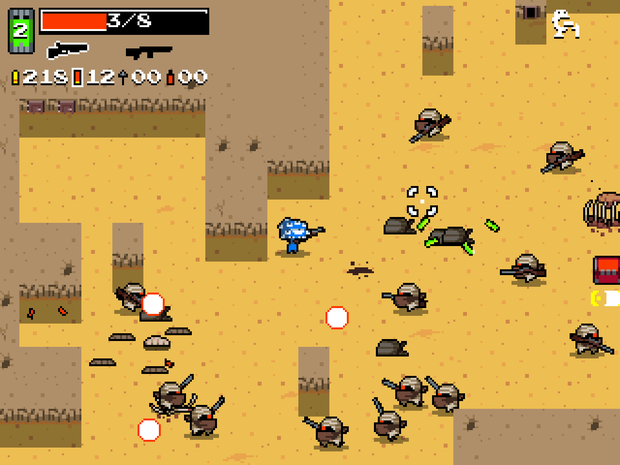 To begin with, you elect a kamikaze from a campfire of adorable mutants. Each has slightly different stats, and you’ll probably have your favorites. Mine is a crawler robot who can eat unneeded weapons and change them into bullets. There’s also a levitating Illuminati triangle who vomits dollar bills, naturally, and a pectoralis major of a hulk in a wife-beater. Appropriately, his name is Steroid. These are suitable visual aids, not only because Steroid comes decked out with high physical attributes, but because they’re suggestive of the good times to be had. As with shooting mackerels out of the sky in Ridiculous Fishing, the studio’s previous effort, there is no way this cannot be fun.

Later, there are rats, and pregnant rats pumping out clones of baby rats.

The game often laughs in the face of adversity. No matter which character you choose you will whack cadavers with a shovel and dodge flaming reports by the seat of your pants. Later, there are rats, and pregnant rats pumping out clones of baby rats. (Yes, I feel like a seven-year-old describing this, part of the charm.) When you die, usually by the fang of a rat, you’ll end up back at the campfire, a fish who has benefited greatly from the effects of radiation strumming an acoustic guitar. Before this death you will have suffered a succession of many smaller deaths. Miraculously, frustration doesn’t set in. Starting over is painless, because every second is a blast.

What makes Vlambeer’s games special is that they’re wound tightly and perform with precision. The thought to put them down seldom crosses your mind. I once played Super Crate Box while sitting in the parking lot of a Publix, game-overing every 30-45 seconds. After a half-hour of this I got out of my car and went in to buy groceries. Nuclear Throne isn’t at that point yet, but it’s getting there. When I asked Rami how they do it, he said it came down to a lot of fine-tuning: “We just prototype the hell out of everything and discard 99 percent.” Having a freewheeling spirit and putting in serious effort are their only philosophy, and you can definitely say the same for their games.