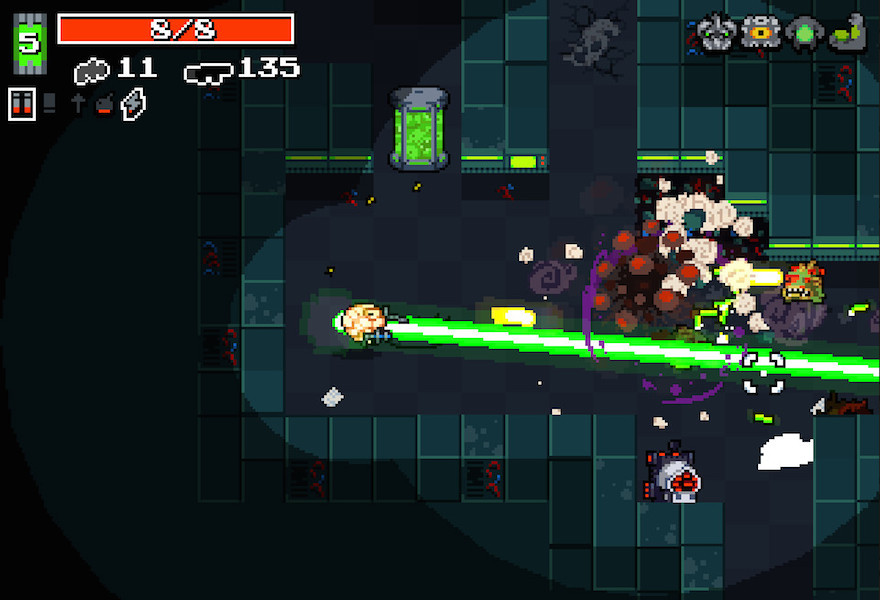 For a game that has zero puzzle elements Nuclear Throne sure feels like a seeing-eye puzzle. If I keep at it long enough I will eventually see the fire truck or star or whatever image it is hiding. There’s a sense that if I stay with it one more turn I’ll land on a magic run that sends me to the eponymous Nuclear Throne where I’ll be a king of the wasteland, like Immortan Joe, or anyone more flattering.

The Mad Max: Fury Road (2015) comparison goes more than skin deep. The world of Nuclear Throne is overrun with bandits and the primary solution to them is bullets. Every problem is an invitation to shoot your way to victory and, barring that, bludgeon your way to success. Aside from the fact you play as a mutated plant/fish/crystal/chicken, Nuclear Throne is as straightforward as one could get. Any obstacle is a point and click away from being a bouncing corpse.

the antithesis of so many other shooters

The beauty of Nuclear Throne is that it is very much the antithesis of so many other shooters. It does away with many of the modern trappings that clutters up the genre today. There is no in-game currency, no cosmetic upgrades, no online matchmaking or versus modes. There are actually very few features at all. You select a character and are immediately dropped into a wasteland where you do battle with scorpions and bandits, armed with only your trusty revolver, and any other weapon you might be lucky enough to find tucked away in a random chest. With a driving anthem at your back you’re left alone to do battle and reach the Nuclear Throne. It’s simple: a game that proves the best sugar comes from sugar canes and that the formula needn’t be more complicated than that.

Out of this reductionist approach comes a focus, pure and distilled: gunfire. All of Vlambeer’s games primarily revolve around using a barrage of bullets to progress, but with Nuclear Throne the studio has tweaked gunfeel and everything that informs it to a master level. Pressing a key moves my character, moving the mouse aims, and clicking the mouse produces a bullet, and hopefully that bullet goes into the world and kills something. But instead of feeling mechanical or dry, the launch of these bullets produces the same joy as the first bite of a hot, flaky pastry or a delicious slice of pizza. In general, of course, we expect outputs to accurately match inputs. The difference is that Vlambeer does more than simply execute on this expectation. They infuse those outputs with a little something extra, something onomatopoeic, something loud.

When I click the fire button my little revolver lets out an oversized boom. When I stab a bandit with a screwdriver there’s a Wolverine style “snikt” that accompanies it. Grenades fire with a characteristic THOOM and give off an almost too satisfying BOOM when they explode. The accompanying damage to the enemies and landscape makes it feel like my little mouse click has a weight and girth to it. This is exactly what Vlambeer’s Jan Willem Nijman said that his games do extremely well at the 2013 Netherlands’ Festival of Games, and he’s right. Not just sound and visual design, but creating a connection between several different game elements in a way that is supremely satisfying. To Nijman, the game is more than what is on screen or beneath my fingers. The game really exists in a third space, bordered by my inputs and the outputs they feed me. This third space might be deemed a secret ingredient, akin to a special sauce only able to be produced via a strange South American pepper. Except in Nuclear Throne it is not a singular component that achieves this, but an entire recipe of tiny effects stacked up to drive that gunshot from your finger, into your eyes, quickly engulfing your brain. The screen rattles at the explosions abound. The oversized bullets are joyous to watch as they cut through maggots and rats. And there’s a tangible sense of impact on its world when you blast an enemy and send its corpse careening through a mob. All of this is punctuated by big booms of cars and barrels, the aggressive thumps of a machine gun or the PEW PEWs of a laser pistol. Vlambeer is wildly successful in blending all of this together to furnish that elusive third space into one that is enticing enough that I keep coming back no matter how poorly I play. It is entirely a sensory experience, yet what I get out of it is more than what it shoots into my eyes or ears.

Nuclear Throne feels like a game that pushes laterally against time. As though it is responding precisely against the teleological push towards the realistic portrayal of guns seen among its peers. Vlambeer manages this by blowing up the most satisfying features of ballistics towards an arcade-informed absurdity. All this is to say that Nuclear Throne is for purists to feel the joy of “point, click, BOOM” in its most distilled form. It’s a shooter that wants to be best at moving and shooting first while fully knowing that true satisfaction in those elements comes from the way moving and shooting feel.

“Purity” in no way means sparse or drab. Purity can be strangely complicated. Each of the representated elements needs, and does make the game better. No one would accuse Hemingway’s fabled six-word story of lacking nuance. In fact, exactly like that mythical six-word story, Vlambeer succeeds by forging a connection between the player and the game. A mastercraft level of audio-visual responsiveness in every bullet fired keeps every successive shot as satisfying as the first one.