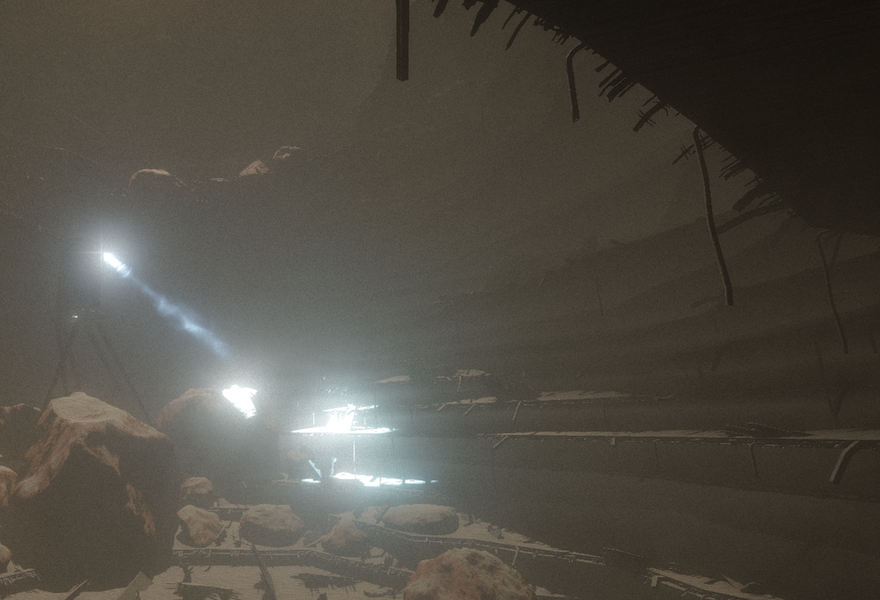 One of the more common pieces of advice given to aspiring writers is to “kill your darlings.” It simply means that writers should be willing to remove passages or ideas from their work that they might personally enjoy in service of the reader. Over the course of developing his game Null Operator, Anton from game development studio Rust Ltd., has killed several darlings.

When it was first announced to the internet as a whole in a blog post in October of 2014, Null Operator was pitched as a game where players fly a spaceship through a cramped, mechanical environment shooting down robot guards along the way while trying to avoid getting caught. Of particular importance was that it was built around full freedom of movement, meaning that the player could move up, down, and side-to-side whenever they wished, as well as hover in one spot for however long they wanted. Among enthusiasts, this is typically referred to as 6DOF, or six-degrees-of-freedom, movement. One of the first games to propose this style of navigation was the 1995 title Descent, which featured fairly standard shootouts for the time, but demanded attention with its multidirectional flying. Not so coincidentally, Descent happened to be one of Anton’s favorite games as a child, and was his greatest influence going into Null Operator.

Describing audience feedback to Null Operator after its first public showing at the Oculus Connect virtual reality festival, Anton wrote “The response was simply incredible, and served to light a fire under my ass to start sharing the project more publicly.” Which is why it was puzzling that after writing that first blog post in the fall of 2014, he fell silent. Expectant readers went for months not hearing from him until he reappeared with a new post in April of 2015, saying that Null Operator was dead (and long live Null Operator).

Brought out of hiding by a Kickstarter for another Descent successor, this one having purchased the Descent name, Anton explained the reason for his absence. He briefly shared his thoughts on the Kickstarter—“FUCKIN’ NOPE”—before ruminating on how his experience playing Descent might have differed from that of this other game’s creators.

The Kickstarter project, Descent Underground, was presented as a fast-flying experience that was primarily about shooting down computer-controlled robots and player-piloted ships within a 6DOF environment. To Anton, this failed to capitalize on what he loved so much about Descent, and caused him to rethink his entire project. He came to the conclusion that what he enjoyed so much about Descent wasn’t the shooting so much as exploring alien mazes, listening to synth-rock soundtracks from Type 0 Negative and Skinny Puppy, and the thrill of being able to fly wherever, whenever. As he would explain in a later post, “The beauty of a 6DOF game…is that the player has the ability to fly basically anywhere they want, press their face up against any object and see it in all of its detailed glory, from any angle they please.”

So he retooled the game. “I don’t want to make the ‘Descent’ some people seem to want at all,” he wrote. He scrapped the original version of Null Operator, and instead replaced it with a peaceful experience that was less about shooting down robots and more about exploring weird, ethereal ruins from any angle possible, sympathizing with their inhabitants rather than fighting them. He described a scene in which he had placed a large robot from one of his sketchbooks into this new game world. “I didn’t want to fly around shooting it. I wanted to help it,” he said. “I wanted to know why it was here, what it was looking for. I wanted to ask it where everything else had gone.”

This new direction kept Anton motivated through June of 2015, at which point he again mysteriously disappeared. However, earlier this month, on February 12th, he finally posted a new entry on his blog, this time with another change in direction for the game. “The idea of Null Operator I had been working with back in July was as a sort of 6DOF dear-esther-like experience,” he explained. “But…I ran into a giant issue once I scaled the constructed kit to a full (even short) building. It ran like shit.” This technical issue proved to be fatal to the project, as despite multiple attempts to fix it, he could not get the movement system he loved so much to work alongside the spacious, detailed world he had constructed. “So I fell away from the project,” he said. “It straight up died at that point.”

But this didn’t stop his creative work. Anton still had ideas he wanted to play around with, and because “Null Operator has basically been the receptacle of whatever I’ve been passionate about,” he did so within the context of his now-dead project, dabbling with new code for what was left of it. Which eventually lead him to again reconsider his what his goals were with the game.

“It was clearly moving in a direction that I’ve also found myself in,” he explained. “…namely creating something that is visually compelling, rhetorically interesting, likely to [be] fun for others, but something I would likely not find myself actually wanting/needing to play/experience myself.” This was because he felt constrained by the pressures of being a “Captial-A-Artist,” afraid that this sort of selfless approach to design “verges on the only acceptable way to make a game within the institution of ‘Captial-A-Art.’”

He had killed all his darlings, and consequently killed his interest in the project. “While this may be a totally acceptable approach for a film/painting/whathaveyou,” he realized, “I’ve come around more and more that this is really stupid way to make a game.”

As such, Anton has now resurrected Null Operator, but under his own terms. “From here on,” he wrote, “you’ll be seeing a very new and different Null Operator.” Details on this new approach are sparse at the moment, but Anton has promised weekly updates on the project.

You can keep up with Null Operator over on Anton’s blog.