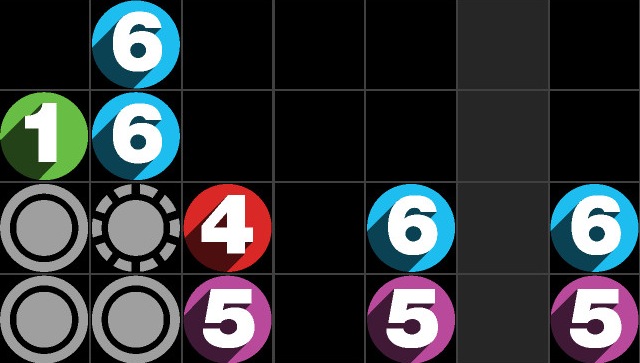 Drop7 is a puzzle game about numbers, but to call it a number puzzle would overemphasize the mathematics required from the player. You can count to seven? Perfect, that’s as high as you need to go. Drop7 is what happens when designers decide that match-3 puzzle games need seven times more ways to destroy arbitrary objects.

The game uses discs on a board of 49 squares. Discs numbered from one to seven will only disappear when they are in a column or row the same length as the digit it displays. Grey, numberless discs need to have their number revealed, or cracked, first, which only happens when numbered discs are twice removed in squares next door. The player drops discs from above, with a row of greys appearing at the bottom after a certain number of drops. Successful play means clearing the board as quickly as possible, but also trying to clear the right discs at the right time.

The numbers form the basis of the system you explore in Drop7: Like the straight block in Tetris, seven gets things done. Easy to get rid of, enjoyable to rack up, and impossible to lose with, it’s the simplest disc to use. A column or row in the play area has to be full for any sevens in the line to burst, so they are much desired with a game-over looming.

Six is the most problematic of all the discs in the first half of any game. It’s a cute baby blue in appearance, but find yourself with sixes in each of the end columns and the only way is up. Vertical lines can save you, but salvation comes at a cost; because getting rid of discs opens up any adjacent grey ones, any discs spent removing a six could probably have been used elsewhere. With no time limits, this is a game about thoughtful planning, not rushed speculation.

If a five is causing you trouble, expect a game-over screen pretty soon. They’re fine for low-level clearances, but a poorly placed five in a stack that’s six or seven discs high is an undesirable move at a difficult time.

Vertical lines can save you, but salvation comes at a cost…

Median and mean of our sample set, four is a typical middle child: neither particularly useful nor particularly hard to get rid of. Rather than going straight to a high score chart, end-of-game statistics are compared against your mean score; an encouragement to those out of form.

Things start to get risky with three. When a pile gets halfway up the screen tactics have to change. Three and anything smaller will only be cleared with horizontal lines and awkward situations are abundant. Two threes four spaces apart, if you follow, need at least three carefully placed discs to deal with. And that’s assuming that the discs you’re dealt don’t crack a chasm between the two.

Incredibly powerful and incredibly dangerous, twos can be great for cracking discs and setting up combos, but, like threes, too many in a row can form impenetrable layers of sediment, blocking access to the unexplored rocks below.

Ones just need to be removed. Yes, use them open up some numbers, but don’t let them hang around. Breaching the top of the screen is the one way to end a game of Drop7. Often you’ll be well aware that a game cannot be saved, especially if careful attention hasn’t been paid to those ones, twos, and threes. So you’re left with a choice: Quit and restart, or carry on and at least try to improve your average.

Two or more rounds of destruction after dropping one disc starts a combo. The quickly increasing value of disc removal seems to willfully reject mathematics: as far as I can tell there is absolutely no pattern to it. As in Bejeweled, combos come from a certain amount of skill and foresight, and large amounts of luck. Unlike inBejeweled, spend too much time setting up a combo and a level-up might ruin it, or worse, you might neglect another part of the board as it creeps toward the top of the screen.

Superstition has a lot to say about threes; most appropriately for Drop7 that bad news comes in sets of them. Paradoxically, we also suppose that the third time’s a charm. For Drop7, a three on its own might be bad news, but get three in a row and you’ll be safe again.

This is a game that owes a design debt to Connect 4: both have Verb Number titles, but fundamental details are similar too: discs are dropped into one of seven slots, falling down the column; the aim of the game is to line up discs in a certain way; and even the play area is almost the same size, seven-by-six in Connect 4 and a seven-sided square in Drop7. Connect 4’s further relation to ancient boardgames like Go might go some way to explaining Drop7’s appeal.

Area/Code, the independent studio that originally developedDrop7along with a handful of Facebook games, was six years old when it was bought by Zynga, the social games phenomenon, in January 2011. Zynga was recently valued at something like $10 billion, and after raising $500 million worth of capital, it wouldn’t be surprising to see at least six zeros at the end of the undisclosed price paid for Area/Code. Part of the deal involved rebranding the game as Drop7 by Zynga, which might have left a sour taste in the mouths of some. While the upgrade is optional, support and updates only go to the new version.

The seven days of the week, the seven seas, Shakespeare’s seven ages of man: it’s a number that feels complete. But Drop7 is a game about competing rather completing; it’s a remarkably simple success with no achievements, no mini-objectives to level up in the meta-game. The numbers inside and surrounding Drop7 show that its apparent simplicity hides a fractal complexity when explored for hours, days and months.