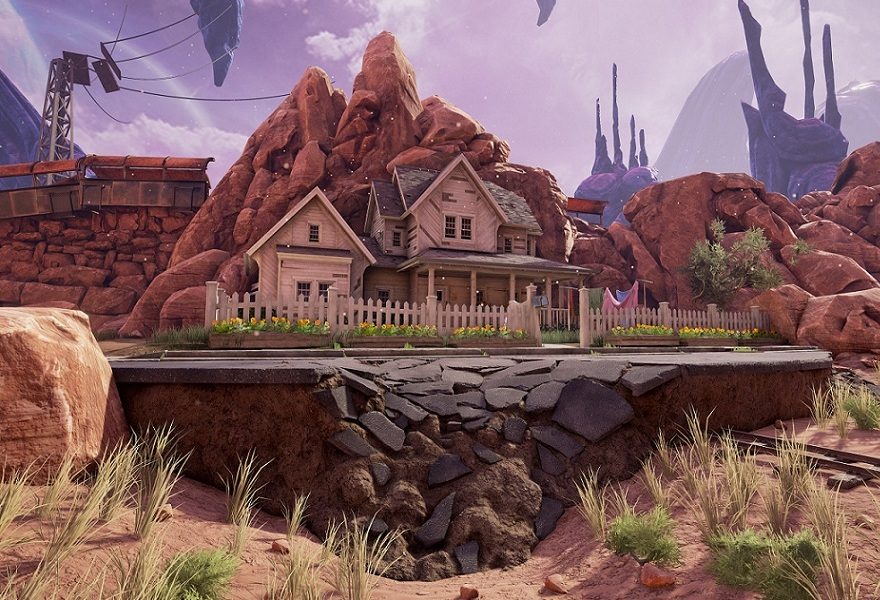 Obduction, despite how cosmic the word sounds, does not refer to flying saucers. More terrestrial than extraterrestrial, obduction means when one oceanic tectonic plate heaves up and laps over a continental plate. One world eclipsing another. Imagine the confusion you’d feel if you one day woke up underwater.

Myst (1993) began with Atrus (one of the series’ central curators, played by co-creator Rand Miller) falling out of his world. An iconic frame—prime enough for the box art—of a free-fall silhouette descending from a rift into a starry unknown. In a similar setup, Obduction begins with the world falling on to you. A tranquil moonlight night by the lake, interrupted by a fallen star that explodes into a pollen of light. You awaken in the new world, or perhaps the town that is a world, Hunrath, abandoned and still. The train tracks, lone ranch house, and wild west village make it look like The Magic Kingdom’s eclectic and uninhabited ToonTown. The junkyard, graffiti, and power plant make it look like infrastructure hidden an hour’s drive from the city. The purple alien landscape, in the foreboding distance and surrounding everything, recontextualizes it all as a mystery. It’s all begging to be deciphered.

Cyan, creators of Myst, revealed the Kickstarter for Obduction on the anniversary of their original classic. There’s no mincing the tethers between the two. The faithful who wanted Myst or something like it can take a big sigh of relief.

In many broad sweeps you could describe both games in similar terms. The forests, libraries, and observatories; the environments and architecture of Myst only look confusing in proximity to each other. The bulk of storytelling is hidden in plain sight, scrawled on notes and in books left behind by whoever vanished in a rush. Obduction, too, has a generous number of live-action performers who pop in from holograms and windows like the queuing area at the Universal Studios theme park ride Kongfrontation. You’ll be pulling a ton of levers.

Its logic is based on Cyan’s new holistic sense of semiotics. It’s not that the world is designed to be challenging to its inhabitants, merely difficult to a layman. It would be the same to travel to a country with a different alphabet. High genre, such as fantasy and sci-fi, allows for tourism as a puzzle. Obduction gets this, it captures the challenge of getting lost, which can feel sweet the moment it stops feeling frustrating.

Obduction is completing that thought, or it aspires to challenge its plasticity. Hunrath is strange and faraway, but it’s 75 percent pedestrian: the refuge of abductees and the slices of America pilfered along with them throughout time; buildings filled with bean cans and books. The tools, phone booths, carts, and gas pumps, are ones you’ve used before. But imagine, if you will, in a Twilight Zone sense, that just one thing was out of place. The phone book was in a strange language, the paths lead in a circle, you look at the clock and things don’t add up, or the source of power for all your domestic appliances came from an alien source. Familiar objects in a strange world. The only goal the game spells out to you, through Hunrath’s last living soul C.W., is to escape. It sounded easy enough. At least when he said it.

After an early hallmark, the last moment when things seem routinely manageable, you’ll discover just how distorted the geography of Hunrath truly is. The edges the of the bubble warp you to other parts of the periphery, and pods will outright teleport you to completely different environments. A lot of the challenge of Obduction is essentially mapping an Escher painting. Fitting together pieces of an unruly puzzle, tearing your hair out at times just to get over a wall can feel humbling. It might also be humiliating depending on much backtracking you do. It’s at these times that Obduction requires you to sharpen your smarts enough to overcome the process of trial and error. Yes, it can prove rewarding, but it also veers towards exhausting.

Despite outright dealing with alien dimensions that overlap in certain ways, Obduction’s puzzles don’t feel nearly as quantum as The Witness’s. They’re more about how you weave through the space than getting you stumped on a specific lock. However, those who found The Witness’ aesthetics needlessly cerebral, or prefer puzzles that feel more tactile, manual, will appreciate Obduction’s comparative frankness. I’m not saying Obduction is inherently easier, but I am saying that the solution is often something you’ve overlooked.

Obduction is one of the sharpest-looking Kickstarter babies to date. That’s also my veiled warning that, despite it being a puzzle game, you should be prepared with some decent PC hardware. It’s got vast and detailed environments. It’s all sharply coordinated with a great sense of flow. The big carrot is to create your own cohesive image of the abandoned world, to get real big geeky about the lore, something fans of Myst always seemed to appreciate.

With Obduction, Cyan has created another game that’s an art of personal journaling. What you know, what you’ve gathered, will save you. The tools seem familiar but it is details that are your weapons. As the otherworldly overlaps the banal, you’re trapped in a labyrinth of places and things.