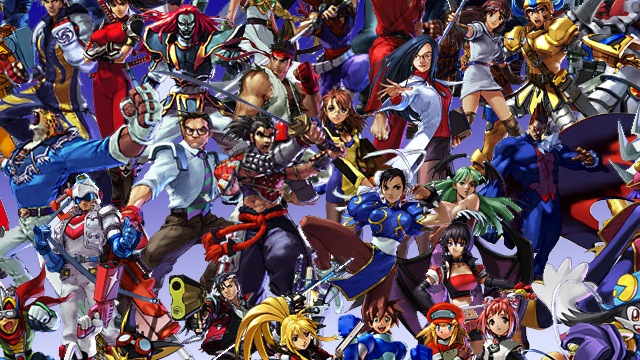 The worlds of fiction are inherently malleable. Since they exist solely in the minds of their creators, rules bend to the slightest of whims; what begins as flight of fancy can take hold and not let go. Before we know it the undead have invaded Longbourn. Dear reader, our classics are being spoiled, and something needs to be done.

Up until recently games didn’t play with these imagined boundaries as much as you’d expect. Sure, there’d be the occasional cameo–Bowser-cum-Godzilla devastating your SimCity in the SNES version, or a pre-Metal Gear Solid Hideo Kojima littering his 1988 visual novel Snatcher with Konami references –but for the most part, universes remained separate. You didn’t get your Streets of Rage in my Final Fight, and that was that.

Crossover games are spilling out like gremlins stuck in a sprinkler factory. What began as a clever way to boost fighting game rosters and stoke the flames of a thousand ‘What if…’ scenarios has spiralled out of control. In the mid-90s, Capcom decided to combine their Marvel Super Heroes fighting game with their hugely popular World Warriors and release X-Men vs. Street Fighter. Future iterations on the formula would combine other fan favorites like Darkstalkers and Mega Man, ultimately bringing in the roster of arcade kings SNK and anime producers Tatsunoko to battle Capcom’s finest. Sega followed suit with Fighter’s Megamix for the Saturn, pitting Virtua Fighters against Fighting Vipers, and even the car from Daytona USA.

Games we love are being smashed together, leaving tatters and remnants

The fruits of these early experiments have finally ripened. Project X Zone, revealed to be coming to the west after a disappointing launch this fall in Japan, is the ultimate mash-up, combining properties from Capcom, Sega and Namco Bandai in the form of a grid-based Strategy RPG. Control Frank West (Dead Rising) or Jin Kazama (Tekken). Ulula (Space Channel 5) might join in, or Arthur, the shaggy knight with hearts on his boxers from Ghosts ‘n Goblins. Upwards of sixty characters from the three companies will aid or hinder your quest.

I know many are ecstatic for the news of its localization, just as many are overjoyed (if somewhat confused) by the recent unveiling of another strategy RPG’s existence, the Atlus/Nintendo collaboration Shin Megami Tensei X Fire Emblem. Do not be fooled. Such efforts are genetic mistakes, a strand of DNA zigging when it should have zagged. Mutations occur in science when a weaker cell is overtaken by an incoming, stronger one. Games we love are being smashed together, leaving tatters and remnants where once stood fully-realized worlds.

In the real world, cultures coming together is a positive, even necessary force to battle prejudice bred by ignorance. But even now, after a millenium of effort, humans still struggle to co-exist. Azadeh Moaveni was born in California from Iranian parents. Her memoir Lipstick Jihad highlights this struggle. After she moved to Tehran,

If people can’t learn to live together after thousands of years, how can games after a few decades?

Some may point to Kingdom Hearts as an exception to my narrow-minded curmudgeonry. Fair enough. I’ll grant that even mistakes sometimes make for a tastier soup. But be wary. We are opening doors hard to seal up. Once unheard of collaborations (Mario & Sonic… in the Olympics? What?) have lead to a greater acceptance to such travesty. Professor Layton vs. Phoenix Wright will beget Sackboy vs. Catherine. No good can come of this.

Boundaries exist for a reason. Chaos leads to chaos. You’ve been warned.