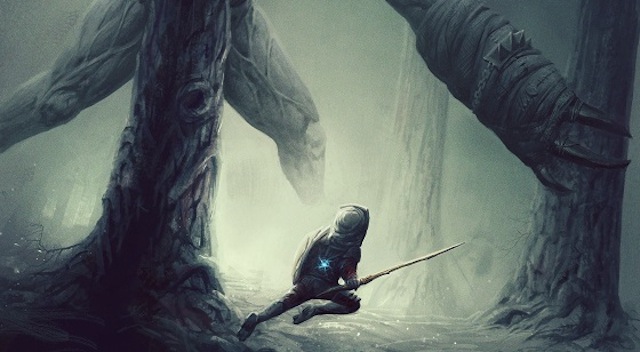 It often happens that landmark games go on to become their own thing, spawning generations of interpretations. From Software’s Dark Souls appears poised to become one such game. Its relentless nature struck a chord with many, including the creator of Oblitus, as evidenced in the very familiar-looking posters (which would do Boris Vallejo proud), but also in basically everything.

How does this thing play? It seems that, as in Dark Souls, you’ll be taking over a spiritually-displaced knight and facing off against towering monstrosities. The talking point is death, misery, harshness, and, of course, plenty of darkness, but it looks pretty darn cute with its 2D art style and cartoon knights. We presume that contrast makes it all the more unsuspecting when a horrible golem swats you like a fly.

It’s awesome that Dark Souls is shaping up to be such an important game in the videogame canon. Many independent games have used it as inspiration, including the brilliant Fjords and Titan Souls. Then there’s the fact that even Zelda had its own twee version of invasions, a feature from Dark Souls that let you enter other players’ games and hunt them for bounty. Also, Capcom’s Deep Down looks mighty Dark Souls-esque. This is a trend that may get old in 20 years but for now we can’t complain about it.