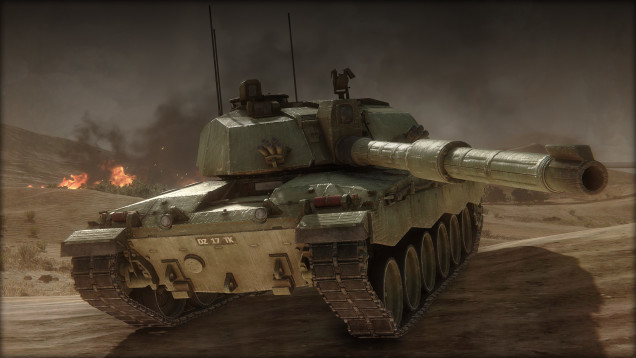 Obsidian, they of the sprawlingly written, cultishly adored, feverishly buggy RPG, are making Armored Warfare, a game where you play as a fucking tank. In it you roll around, level buildings, and kill other tanks. It is not an RPG about tanks. It is a Tank Game, a sort of prettier version of the MMO World of Tanks or any of the smaller games that weirdly emulate World of Tanks.

I played it, trawling tank-like through a beautifully rendered deciduous forest alongside a handful of other tanks, shooting tanks. I was not very good at it. I am not a Tank Guy but if I were I could see how this would be a satisfying experience.

This is interesting because, again, it’s a fucking tank game being made by Obsidian. Their games—Neverwinter Nights 2, Knights of the Old Republic 2, the recent South Park: The Stick of Truth—are immaculate RPGs, full of sprawling, hand-crafted side-quests and intricately designed combat. Even their relative failures (like Alpha Protocol) are beloved in some quarters. I spoke to project director Richard Taylor, who said he’s been with the company since its inception, about this leftfield creative jump, and he explained that they’re actually able to channel those same company calling cards into this new, if unexpected, endeavor.

And so all of those numbers determining HP and armor-type and how much a hit in one quadrant effects a stat in another will be grinding beneath the surface of Armored Warfare, he promises. The patient, intellectual rhythm of RPG combat is meted here out in reload times and an emphasis on positioning. Long-term progress is felt by gleaming the immense depth of historical accuracy in the tank models. Even those signature side-quests here turn into a promised variety of mission structure and imposition of frame narrative—even if, in the end, all you’re actually doing is being a tank shooting other tanks.

Whether or not they’ll pull it off, of course, remains to be seen. No release date has been announced.