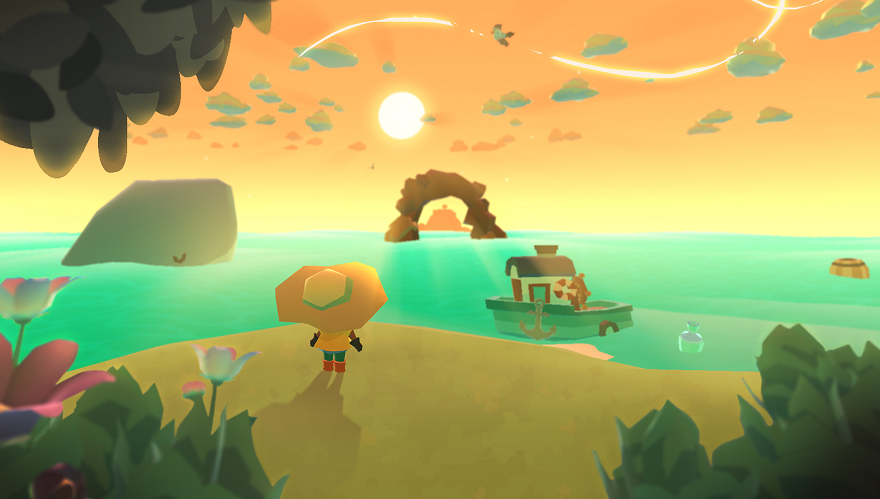 “Oceanheart is a chill exploration game about sailing away and making a home.” That’s how co-designer Karen Teixeira describes the fledgling new project on her website. Teixeira began development on the game in late April of this year. Since then, she’s slowly been revealing new details and video samples on the game’s Tumblr.

The premise is straight-forward enough: an open-world adventure game where players sail around exploring different islands and discovering underwater secrets. But beyond the minimalist trappings of an Animal Crossing at sea—including fishing, cooking, crafting and some amount of boat-as-house interior decorating—the game’s real charm lies in the comforting simplicity of its uplifting aesthetic.

Its world is arranged as delicately as a child’s dollhouse, from quaint archipelagos which sparkle on the horizon to the homely inside of protagonist’s Mami’s ever-evolving boat. Teixeira says there are elements of the game’s visual style that are influenced by The Legend of Zelda: The Wind Waker.

And instead of searching for dungeons and fighting monsters, Oceanheart focuses on taking a large interactive playground like the ocean and helping the player to find a home there. “Oceanheart at the beginning was supposed to be a short artsy game of sorts,” Teixeira explains. It emphasized the lonelier side of sailing by focusing on a world filled with messages in bottles but not other humans to find. But as development on the game progressed, new possibilities emerged.

As Teixeira explained in a recent interview, Oceanheart was born out a tumultuous time in their lives. Fallouts with friends and relocating to a new city had left them feeling isolated. Over the course of development, however, the game has grown into its own, with whales in top hats and crystallized anchors that evoke the playful eccentricity of an aquatic tea party.

Partly, that’s because the game harkens back to Teixeira’s childhood. “A lot of Oceanheart has to do with my experience growing up in a city by the coast of Brazil called Santos,” she says. “So days at the beach, ferry rides and all of that, feel pretty homely and familiar to me!”

nature as if you could cuddle with it

Oceanheart’s penchant for depicting nature as if you could cuddle with it isn’t surprising given the projects that preceded it. Teixeira’s work on games like Twelve and Toyrun for Bossa Studios, and more recently The Wolf’s Bite, shows her flare for whimsy isn’t unique to Oceanheart.

So far, Teixeira has only demoed the game for friends at a house party in Vancouver, but hope to show it publicly in a few months when the game is further along.