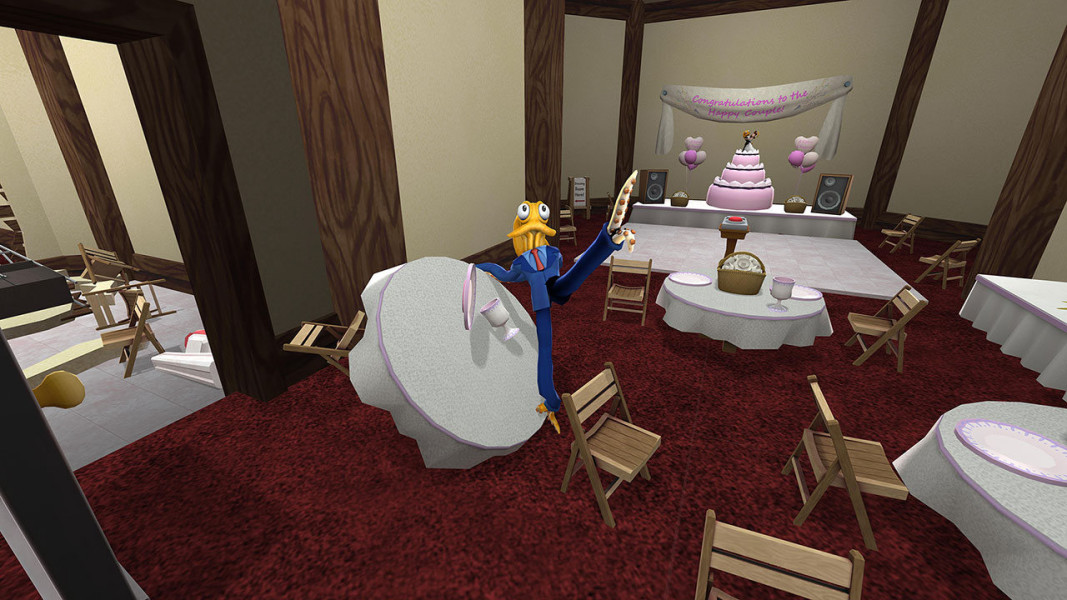 Videogames take themselves pretty seriously. The most popular blockbuster videogame series are those that are politically fraught, emotionally affecting, visually affecting, and violent. Take, for example, Assassin’s Creed. Or Bioshock, or Call of Duty, or Elder Scrolls, Battlefield, Mass Effect. All wildly popular, all wildly serious.

These dramatic virtual tales rarely leave room for lighter moments. The de-facto standard for commercially popular videogames involves killing, power, and physical mastery, scaffolded with weighty, impeccably constructed physics. (When they do attempt humor, as in the satire of Grand Theft Auto 5 or the low-brow yucks of Borderlands 2, it is far from sublime.) We are meant to imagine a one-to-one relationship between our world and that of the diegetic arena, and we are meant to imagine it seriously.

Enter Octodad: Dadliest Catch. Octodad is the sophomore videogame project for Chicago’s Young Horses, Inc. and one of only a handful of games that ventures deeply into the realm of comedic absurdity. It takes one glance at sophisticated game physics in its videogame contemporaries and throws a spanner in the real-world works.

The game centers on the patriarch of an excruciatingly normal family. But said patriarch is secretly an octopus, forced to hide his true identity. Maintaining secrecy is easier said than done: octopi cannot navigate land so gracefully, we learn, and so Octodad wobbles around like a baby deer learning to walk. Think Being John Malkovich meets QWOP meets The Coneheads.

That physical ineptitude is the focal point of Octodad’s comedy. Octodad is a “hard-to-control, awkward mess of a character,” according to John Murphy, a developer for Young Horses, Inc.

According to Murphy, Octodad drew its inspiration from unintentional comedic classics like the PC disaster Jurassic Park: Trespasser, released in 1998. To say this game was overhyped would be an understatement. Meant to be a companion for the 1997 film The Lost World: Jurassic Park, the game’s development occurred in concert with Steven Spielberg himself and Minnie Driver, who voiced the main character. But even Spielberg was an insufficient force to rescue Trespasser from mediocrity and buggy-ness. The game “was supposed to revolutionize AI and games and physics, but it ended up being this weird, accidentally hilarious thing.”

The game has lived on in infamy on YouTube compilations: the player’s arm flails about gooily, and dinosaurs react to gunshots by sort of floating up and backwards. These unexpected encounters with the impossible and the grotesque demystify games, injecting humor into an otherwise serious moment. “There’s some inherent comedy in games doing what you don’t expect them to do,” says Murphy.

So Octodad takes the surprise glitch encounter a step further: absurd physics are intentionally coded into the game.

Herein lies Octodad’s unique position. To watch and revel in the joy of the unreal on YouTube is one thing, but experiencing it as a player is a whole other issue. At what point does a game that centers on a difficult-to-control main character become too frustrating to pilot?

“Trying to balance the level of physical comedy and intentional frustration is something that we’ve been tuning for three years now.”

The developers at Young Horses, Inc. are well aware of this difficulty. “Trying to balance the level of physical comedy and intentional frustration is something that we’ve been tuning for three years now.” Too easy to control? The humor’s gone. Too hard? Rage-quitting all over the board, even if Octodad looks like a dancing tube man outside of a car dealership.

The canonical text of slapstick comedy, The Three Stooges, can help us understand how Young Horses, Inc. has worked to mitigate the rage-quit potential while maintaining the comedic value. Curly heads to a restaurant and orders a bowl of oyster soup with crackers, but every time he tries to nab a spoonful of the soup, an apparently very fresh oyster eats the cracker. And then grabs the spoon. And then spits soup in his face. Curly’s continual efforts to just eat the damn soup become more and more frustrating for Curly and more and more funny for the audience because of the increasingly absurd waterfall of unsuccessful outcomes. (Spoiler: he never gets a spoon of the soup—he pulls a gun and shoots the bowl).

Both Curly and Octodad are cases of what Murphy calls “emergent physical comedy.” In both cases, that comedy is catalyzed by continual expressions of ineptitude, but the humor softens the blow of any frustration that might emerge from the screw-up.

The point of the game, then, seems to be not so much about completing tasks perfectly and proceeding along a prescribed narrative. Rather, the Octodad world enables players to explore possibility, contingency, and the joy of the unexpected.

Ultimately, if we dig past the frustration, the loopiness, and the infidelity to real-world physics, we can find a surprising emotional core within the game: empathy. We are meant to empathize with a character who wants to belong to a particular world but whose physical foibles—as we experience—make that really, really difficult. “Having it be difficult and having that struggle is important to the gameplay,” says Murphy. As exhausting as it is to physically navigate him through his world, we’re left considering what it’d be like to be on-guard all the time, hiding your own identity, even if that identity is an octopus. Everyone’s fighting their own battles.