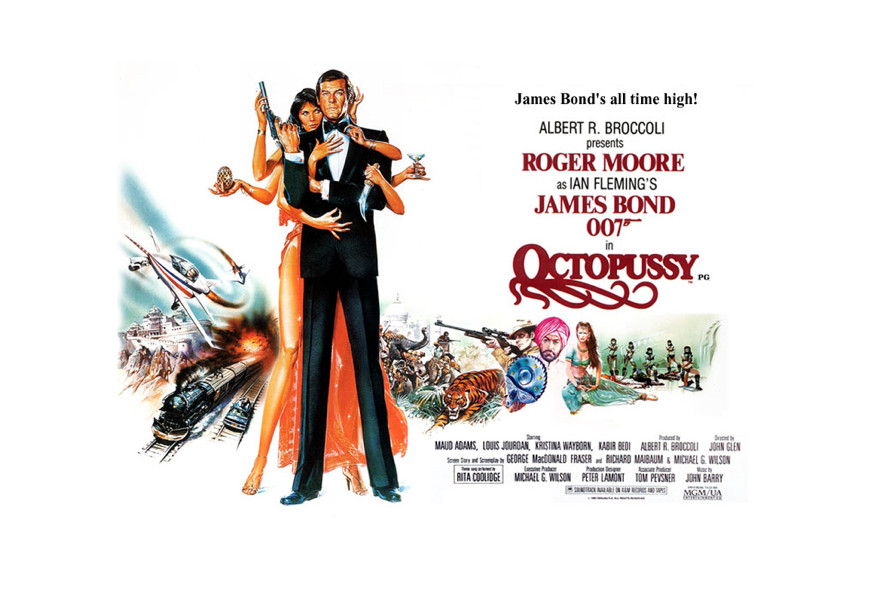 Roger Moore’s James Bond was, for better or worse, a man of his time. He bore little resemblance to the hero of Ian Fleming’s novels, who was a man that embodied Britain’s post-World War II angst about its place in the world. Instead, Moore’s Bond was a study in light-hearted fun: all arched eyebrows and loud suits. Thus, even though participants in a 2004 Academy Awards poll named Moore the “Best Bond,” his films are often dismissed as being dated. That quality, however, is one of their main appeals. The seven Bond films Roger Moore made between 1975 and 1985 are fascinating time capsules.

Speaking of time capsules, Den of Geek has unearthed images of an unreleased videogame based on the 1982 film Octopussy. The game, which was described in a 1983 Parker Brothers brochure, would have been the first 007 videogame. Made for the Atari 2600 and the Intellivision II, the game would have recreated Octopussy’s semi-climactic train chase, in which Bond and twin circus performers fight over a Fabergé egg on the roof of a moving train. The game, like Moore’s 007, was rendered in broad strokes; its characters were white outlines, its train cars were blue boxes, and its skyline was an abrupt red-to-yellow gradient.

Octopussy was never released as a videogame. “Weirdly,” notes Den of Geek’s Ryan Lambie, “a Bond game did emerge from Parker Bros in 1983—just not the one billed in its brochure or magazine adverts.” It was James Bond 007, a side-scroller that shared the aesthetics of the Octopussy brochure but stole plot points from various Moore films. Thereafter, Bond games became the norm. In fact, every Bond since Roger Moore has featured in more videogames than movies.

The disappearing Octopussy game never had to face the enduring debate over whether James Bond can be a videogame hero. Insofar as the 007 franchise remains lucrative, this debate is divorced from commercial realities. Yet, in some corners of Bond fandom, doubts persist about whether a man who skates through life using little more than charm and perseverance. “I’m a giant James Bond fan and I’m always frustrated by games that make him a mass murderer,” Telltale Games cofounder Kevin Bruner told GameSpot. “He’s a super-spy, and that’s a different skillset. The films make him less of a mass murderer, and there’s not much killing in the books—more spying and intrigue.”

That’s why the Octopussy game is such a loss. Octopussy is perhaps the most self-aware of the (Roger Moore-era) Bond movies; it features the franchise’s hero in a clown costume and a sequence involving a horse’s ass. If Octopussy, as opposed to the more self-serious 007 entries, had been the inspiration for the first Bond videogame, might things have worked out differently? That question cannot be answered until a copy of the game surfaces—if ever. Until then, the only version of Octopussy involves an aging Roger Moore strutting across India and Germany, hamming it up: his Bond is every bit as old as the dad jokes that he tells.