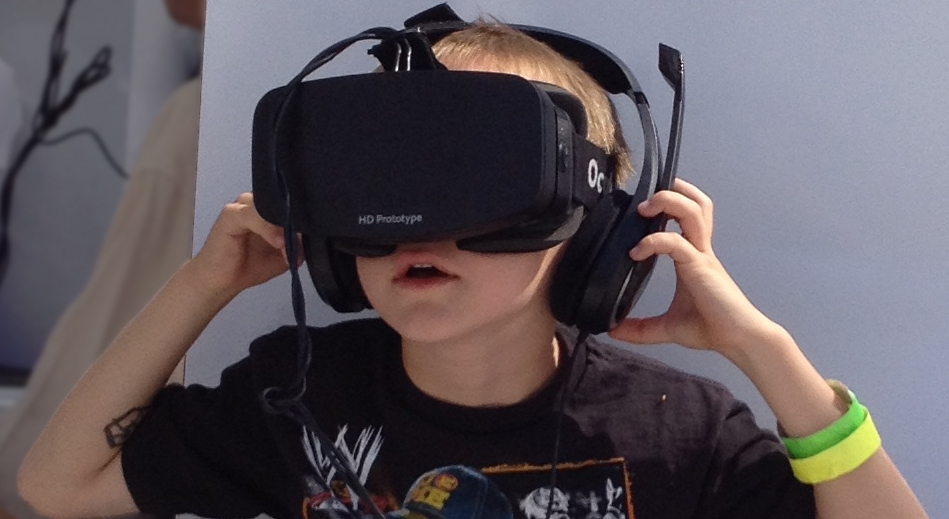 These and many other ideas, concepts, and possibilities were casually flung about and discussed during Oculus Connect, the VR purveyor’s first annual developer’s conference in a Hollywood hotel. It was an opportunity for roughly 800 developers—and a handful of writers—to get together in the physical meatspace to gush and gab and usher in the boom times of VR prognostication.

It’s a medium with limitless potential, untested by the public, whose true value and practicalities are not yet known. So, in other words: Everybody’s kinda right and everybody’s also kinda wrong.

All we really know about VR in 2014 is it seems capable of everything we can and can’t perceive in this reality.

What is clear after floating around the conference for a day and a half: It’s supremely refreshing to be entering a communal headspace where there’s so much support and tinkering, even if nobody knows where all this is going or even where it should be headed. All we really know about VR in 2014 is it seems capable of everything we can and can’t perceive in this reality but, you know, in another one with a much higher resolution.

Through a series of keynotes from Oculus brass, the company line seems to be: It isn’t up to us to tell you what this platform is trying to be. Heck, the people behind it can’t even seem to reach a consensus. A few times during a panel on The Future of VR, the speakers philosophically disagreed with one another or audience members on where VR should go and even the strength or viability of the current software being made for it.

During the aforementioned panel, Oculus CTO John Carmack (a.k.a. the dude who made Doom) said, “From a content side at this point I think we are over the hump, and it’s smooth sailing in terms of getting it out and getting it to people. If it’s not for something out-of-left-field catastrophic, I would be really shocked if five years from now VR is not a common, broadly used, wildly popular thing.”

He was abruptly cut off by Oculus Chief Scientist Michael Abrash (a.k.a. that one dude who worked with Carmack to make Quake) who disagreed that we “aren’t over the hump” and that VR content hasn’t yet reached the point of being something people would need or even necessarily want to use every day.

We need to rethink our vocabulary and mentality when it comes to understanding what the fuck VR’s upshot is.

The truth, right now, probably falls somewhere in between. During their solo keynotes, both Carmack and Abrash talked about how what worked before in software development won’t work here. All the rules are changing. Carmack pointed out that VR requires a “re-evaluation of the techniques that have worked over the last 30 years,” which lead to new experiences. CD drives gave us Myst, he said, and the Wii gave us Wii Sports. Those are, perhaps, not the most scintillating illustrations, but his point stands: Whenever hardware moves the needle, releases hinging on those new gimmicks showcase the potential. Then, a couple years later, the truly exciting shit starts to hit users. It’s also entirely possibly we need to rethink our vocabulary and mentality when it comes to understanding what the fuck VR’s upshot is going to be. We probably can’t even conceive of it. Yet.

Palmer Luckey described the possibility of someday being able to use the Oculus to stare through the walls in your house—augmented reality showing up in virtual reality. His example was being able to glance over his shoulder from the large speaker hall, see through some walls, and then zoom in on the swimming pool a few hundred feet away.

To Abrash’s point: Unless you’re a contractor or some sort of cyber architect, what the heck are the day-to-day applications of that?

We’re so used to thinking of platforms necessitating “killer apps,” the raison d’êtres for hunks of plastic filled with wires that we bring into our homes to somehow supplement, improve, or distract us from our lives. To me, it makes perfect sense that we’re seeing so much absurdity in and around VR.

For VR to succeed and stick its landing, my money is on it requiring thinking and dabbling with concepts we can barely fully grasp. Luckey’s example above might seem silly or kooky, but it may be the key to providing some unknown developer to giving us VR’s Myst or Wii Sports—if games are even what VR ends up being best suited for.

Just outside Oculus Connect’s check-in, there was an overcrowded hallway where developers had usurped every available chair, corner, and spot on the wall with their laptops and devkits. I saw a balding man with an Oculus violently giving CPR to a dying dummy torso. I saw brogrammers giggling gleefully at gun controllers with realistic recoil and kickback. I saw a more serene demo being given of a scuba-diving sim. It’s hard to imagine any of these taking hold as the future of games, but that’s part of why it’s all still exciting. It seems like that future is still possible.

Many of my dev and writer colleagues Friday night were speculating about what the big announcement would be during the keynotes on Saturday. The big money was on a controller being unveiled and given to everyone in attendance. In addition to that, people were positive Oculus was going to announce a release date for the consumer version.

Neither happened. Instead, CEO Brendan Iribe gave us Crescent Bay, a new prototype of the headset. The main thing in to note about it was, in addition to the usual technological advances I don’t understand, the addition of headphones. Not exactly the extra plastic attachment people were expecting — but I think ultimately this is a good thing.

Audio forces developers and tinkerers, Carmack says, to consider it when making stuff. Controllers shaped like swords or nunchucks are not the future. (If you need further proof of this, peruse Amazon’s assortment of Wii tennis rackets.) It seems laughable, but on Saturday, an attendee did ask Luckey and Carmack whether sword and nunchuk controllers are a possibility. The question was sort of laughed off: Haven’t you been listening? VR is so much bigger than that.