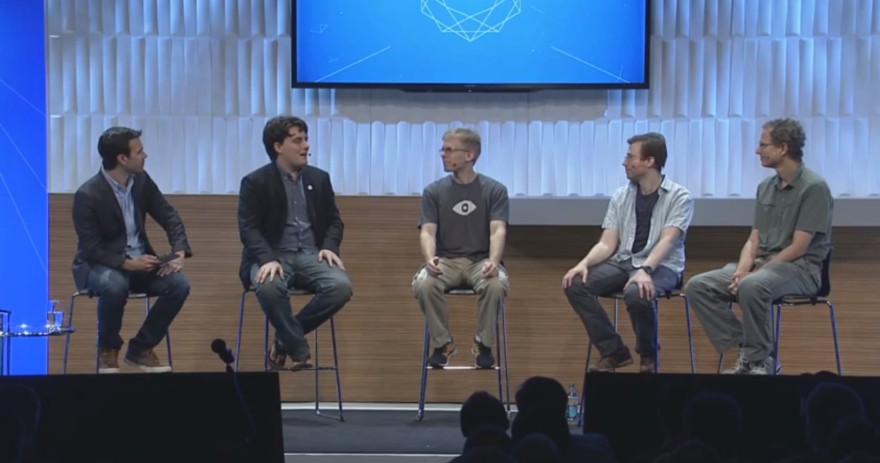 This past weekend in Los Angeles, there was a bit of a historic gathering for virtual reality. The first Oculus Connect, a developers conference for those working in virtual reality, took place at a Loews hotel and Oculus announced their “Crescent Bay” prototype that’s already amazing people. Awesome. Very exciting.

I wasn’t there, but I decided to watch some of the keynotes that are available online as Oculus Connect was only open to those who applied and were selected. There was a particular moment during the fourth keynote titled “The Future of VR” with Oculus VP of product Nate Mitchell, founder Palmer Luckey, CTO John Carmack, chief architect Atman Binstock, and chief scientist Michael Abrash. Emily Eifler, who makes VR video and hosts YouTube culture/tech show BlinkPopShift, asked a simple question: “What is Oculus’ approach to their clear gender gap and how they’re not going to port that into VR?” And here’s Luckey’s initial response which starts at 42:20:

I will address this carefully. [laughter] I noted there were some people online pointing out that Oculus Connect is mostly male. I will point out that in the selection process, there were very few women that applied. It was not that we selected for males and, in fact, women may have come out slightly ahead in the selection process by a slight margin. But I’m not 100% sure what we could do.

This isn’t a problem with virtual reality. This is something that’s widespread in the tech industry. I don’t think virtual reality has any innate quality that makes it immediately obvious that we’re going to be the thing that has a lot more women becoming interested in virtual reality and coming to developers’ conferences or becoming game developers. Then again, I’m not an expert on this issue and I don’t know the best way to solve this.”

We’re having a hard time hiring people that we want. It doesn’t matter what they look like.

That’s it. No acknowledgement of where Emily’s question might be coming from, given all the craziness of the past few weeks in the world of games, or even the customary, “We’re working on this problem.” No mention that Facebook COO Sheryl Sandberg (Facebook owns Oculus) wants a 50/50 gender split in her company. Facebook itself is 30% women, and yet, the Oculus Connect speaker lineup was 100% male. 100%. And the response from the heads of the company in a panel on the future of virtual realty is essentially 1.) This is a problem, 2.) We can’t do anything about it, and 3.) We’re going to keep hiring who we want.

Luckey is right. This is problem outside of VR. We struggle with it at Kill Screen for our attendees for Two5six, for our writer base, and for our audience in general. But that answer—”This is too big a problem for just me”—is often used as a deflection, as a way to kick the problem down the road. Robert Gifford, a professor of psychology and environmental studies at the University of Victoria in Canada, has argued that abstraction around big issues like sexism (or, in his case, global warming) leads to helplessness: “If I had to name one, [problem] I would nominate the lack of perceived behavioral control; ‘I’m only one person, what can I do?’ is certainly a big one,” he told TIME.

“I’m not an expert on this issue”

So let’s start with Luckey’s honest appraisal that “I’m not an expert.” You don’t have to be an expert to know that gender diversity is a problem, and you don’t need to be an expert to think through some basic solutions. Step one is just talking about it at all and it’s unfortunate that it takes a woman during a Q&A to acknowledge the elephant in the room. Klll Screen is two full-time people, both male, so we have a lot of work to do, also.

But Luckey is a bright guy, and we were pleased to have him speak at our very first Two5six conference. So his admission that he’s not the best person comes with about as well-meaning a face as possible. So here are some suggestions for how Oculus Connect could grapple with gender for next year.

State a public goal: If the COO of your corporate parent can do it, you can do it, too. Simply state where you’d like to be to create public accountability for the attendance.

Reach out to groups that might be interested in bringing women to VR: There are tons of them. Code Liberation. Girls Who Code. Black Girls Code. Seriously, there are a lot of groups. Google is dumping $50 million into starting their own initiative, for crying out loud. Give free tickets to these groups to get more women in attendance.

Admit that women are part of your audience: If virtual reality is as world-changing as Oculus believes that is, then women must have a part of that world. We already know that women spend a lot of money on games, books, and movies. Why not believe that they’re going to be a big economic base from the beginning, rather than playing catchup?

Redefine “best”: Carmack’s answer was the shortest, but also gives a naked portrayal of how hiring is done at Oculus and frankly, elsewhere. Here’s how it works. Pit gender diversity against the straw man of excellence. If it’s going to “cost” your company something—time spent recruiting, “culture,” awards, etc.—err on the side of excellence. If your team happens to be gender diverse, awesome. If not, this line of thinking goes, it’s not my problem.

This is how things don’t get fixed. Either part of a company’s health involves gender diversity or it doesn’t. Right now, per Oculus’ staff page, just 12% of the company is female. That’s lower than Apple, Yahoo!, Twitter and so on. Given that Fortune 500 companies with female directors perform better and Oculus’ parent is committed to diversity, I’m sure they can find a way to both meet staffing needs and building an gender-balanced company. In fact, it makes sense. Why else would publicly traded companies make such a big deal of it?

Boom. Five suggestions this morning. I’m sure there are more, and maybe mine aren’t all the best.

But to Palmer and John: It’s ok not to be an expert, but it’s not okay to not try.