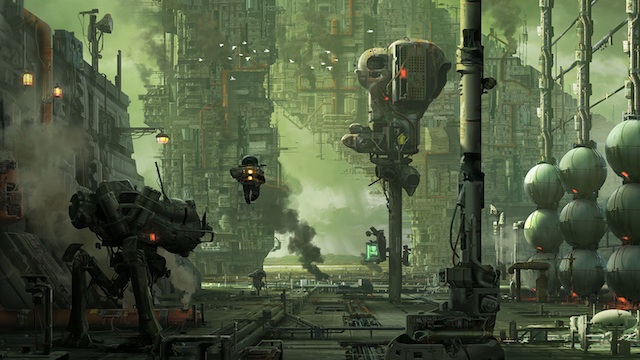 by Jason Johnson
One of the most hyped happenings at this year’s Game Developers Conference was that the Oculus Rift was displayed. A virtual reality headset that takes its cues from Jaron Lanier and 80s sci-fi, the Oculus Rift had everyone excited about the chance to go inside the game to shoot at things. The only line with a longer wait than the Oculus Rift was the queue to get into Notch’s party on Thursday night, and that had Skrillex. All week long, references to Snow Crash and the metaverse abound, and I had more than a few conversations about those clunky virtual reality stations from yesteryear that circuited around the country at shopping malls.

After having ten minutes to go vis-à-vis with the machine, I came away with two distinct opinions: virtual reality is incredible, and it’s incredibly nauseating. The mech shooter

Hawken was being demoed with the Oculus Rift, and it was hard to deny the technophile appeal of flying a machine gun with arms and legs into the horizon of a dystopian cityscape, even after I’d been warned at a talk given by Valve engineers that the technology is prone to cause motion sickness and that it will take years if not decades to refine and perfect virtual reality. The talk was intended for developers interested in making games for the Rift, and a packed house found it extremely funny when a speaker, joking about problems with latency, said, “one-thousand to two-thousand framerate will probably do the trick.”
First my palms, and then my underarms, chest, and face were drenched in sweat.

It wasn’t as funny when I was still marginally tipsy three hours after going face-on for five minutes. Over an appetizer of soup dumplings, I offhandedly commented to Dominick, the guy I was having dinner with, that watching players isolated in the black masks made me think of Guantanamo Bay detainees. Then, I went into the story I’ve been telling everyone about VR. At the demo, I was there with two men I’d never met before. The first was a professor of some sort with a wooly, reddish beard. When he took off the mask, his face was as red as a beet. The second was a man of Asian descent who clung tightly to the seat of his chair. I honestly thought he might fall off.

As for me, initially, my experience was calm and cool. I was sat down, strapped in, and directed to look to my left, right, and behind me to get acquainted with the cockpit. When you do this, you will say, “Wow!” but, I was told the procedure was less for dramatic effect and more to help my cochleae adjust to the space. Joseph, who was instructing me, said that I may experience “heating up,” and I figured he just misspoke and was trying to say that my sense of balance would need to warm up, like getting your sea legs. However, while jogging through the asunder environment, I quickly found out what he meant. Virtual reality is like a sauna. First my palms, and then my underarms, chest, and face were drenched in sweat.

“Your actual head is not going to roll because it didn’t get chopped off.”

The nausea was already coming in waves, but at the same time I was compelled to fight through it and play on because this is some very impressive tech. I hovered onto a rooftop and gazed up at an office space. Then, I had, it turns out, the very bad idea to blast up to the highest ledge and look down to get a feel for the scope of the field-of-view. The only problem was, after doing so, when I handed over the controller and stopped playing, I accidentally bumped myself from the ledge, still strapped into the mask. This resulted in me queasily plummeting downward, reminiscent of the bell tower scene from

This is all anecdotal, of course. People have different responses. Not everyone feels sick. But thirty minutes after playing, I didn’t want to look at even regular, non-VR videogames. Joseph explained that at first everyone thinks they want to play shooters in VR, but other genres are probably a better option. He told me that one of his team’s goals at G.D.C. was to persuade game makers to bring slower-paced, first-person exploration games to the system, such as, say,

Dear Esther. They need more games, but they also need, to mix metaphors, more hands on deck to straighten out the kinks.

Figuring out how to prevent people from getting sick was the entire point of the talk I mentioned earlier. It seems, for some reason, players have a negative reaction to going up or down virtual stairs. Also, HUDs, or heads up displays––that is, the information provided on screen––need to be rethought in virtual reality. So do decapitations. “Your actual head is not going to roll because it didn’t get chopped off,” Joe Ludwig of Valve said on porting

And that’s just the tip of it. There are all kinds of dilemmas to consider. The cord can get wrapped around your neck. And, “It may seem strange to forget which way your torso is facing, but it happens all the time. It’s really weird,” Ludwig said. Another question: should the crosshair move with your head, with your thumb, or do something in between? There are a lot of unknowns to be solved.

Until then, pass the dramamine.