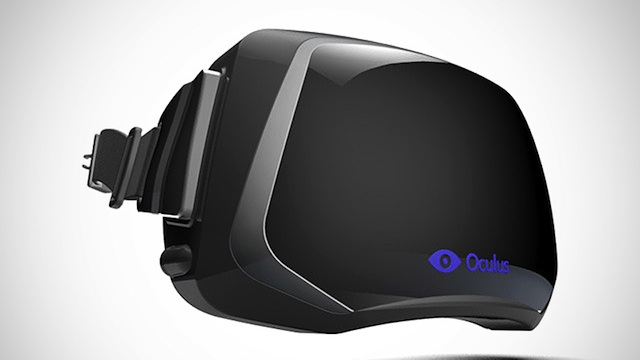 Oculus Rift, the internet’s favorite virtual reality headset peripheral, made a brief appearance on late night T.V. last Thursday courtesy the Jimmy Fallon show. Glowing hands-on reports from CES 2013 have attested that exploring a three-dimensional space with this strange gadget makes players giddy. But as you might imagine, a device where all the amazement goes on on the inside of a box that’s strapped to your forehead doesn’t exactly lend itself to being shown on television.

If I as a games blogger was left scratching my head, imagine how confused the rest of the world must have been. This isn’t the fault of the Oculus Rift — there’s a bigger problem at work.

There is a fundamental disconnect that can happen when people on T.V., or blogs for that matter, try to talk about a more advanced technology than the one they are currently using to describe it. It can fail epically. A good example of this, and one that is constantly making me snigger, is when the nightly news reports on things other people have tweeted, belittling the social media to a series of pull quotes. You lose the sense that the tweet is part of a global conversation. I guarantee this is why my parents are always asking me what’s the point of Twitter.

Though as a writer I’m predisposed to disagree, Elvis Costello once famously said that “writing about music is like dancing about architecture,” and the same could be said about news reports on Twitter, or filming a T.V. segment on virtual reality. You probably shouldn’t bother. This is one case where Costello’s assessment is piercing.

“Writing about music is like dancing about architecture,” and the same could be said about a T.V. segment on virtual reality.

No matter how many times Fallon cried, “WHAT is going on?” and “WHOAAA!!!” and “Holy mackerel,” there was no escaping the fact that the audience was watching him swivel his head in a black mask that looks not unlike a welding helmet. And though they could see on a flat panel screen what he was seeing inside the uncomely black box, there was no wonderment, no immersion, no three-dimensionality.

Needless to say, I was left wanting more information. Aside from the conformation that when you tilt your head, the game’s camera will quickly follow, we were given no sign of how wonderful it might be to don this gizmo from the cyberpunk paperbacks of yesteryear.

When you think about it, this has always been the albatross around videogames neck. It’s hard to impossible for an outside observer to get a gist of what is going on from just watching a game being played. It looks like a murder sim, or a bad Jean-Claude Van Damme movie, or being lost in a mindless gaze, instead of a door into the spellbinding, invisible labyrinths that we gaming cognoscenti grapple to communicate to our non-gaming friends.

It’s in this regard that traditional game companies could learn a lot from Apple, who have excelled at advertising plenty of devices from the iPhone to MacBooks — things you need to own and organize your life with in order to fully understand what makes them special. Apple’s marketing department has succeeded at pitching their products as a lifestyle brand. They have bright cheery commercials that highlight new features impressionistically. But you’ll rarely see how people actually use an iPad, which, in my experience, is reclining in the recliner for long periods of time.

In any case, I’m convinced there has got to be a better way to show off virtual reality than some dude in blinders, isolated from everything and everybody around him. We look forward to trying the Rift in person and facing the same challenges of relaying the experience back to you.