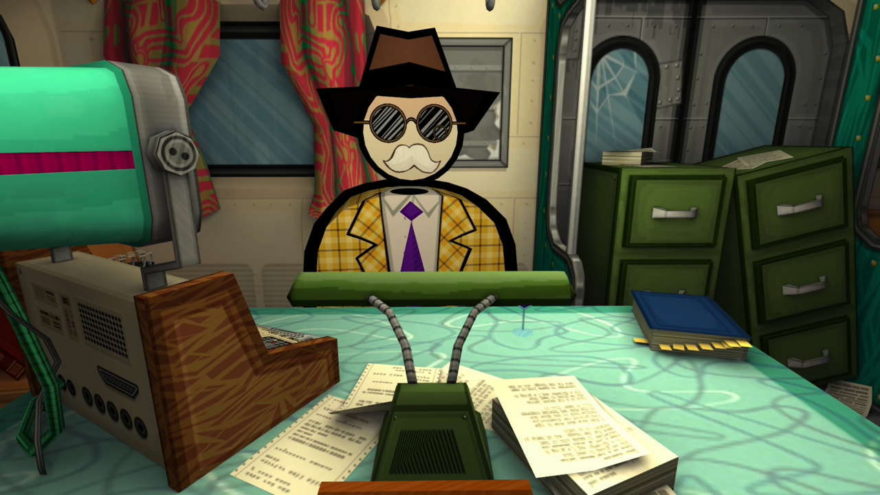 The adventure game most likely to puzzle your eyeballs with a noir-inspired pixel odyssey—Jazzpunk—is coming to PS4 on September 20th.

The trailer for the PS4 release is weird in that quintessentially Jazzpunk way; a combination of live-action shenanigans, a smidge of gameplay, and a dash of construction paper-looking papercraft in an atomic-age package. It sets the tone for the odd game that is 2014’s Jazzpunk, albeit re-released in a shiny updated package.


The version hitting PS4 virtual shelves is a “Director’s Cut,” and as Jesse Brouse, of Necrophone Games, puts it: “Some of the new content was resurrected from our faithful cutting-room floor, while others tidbits were decompressed fresh, straight out of our Brain.zip files! In either case, by distilling reams of precious User Data we’ve been able to strategically shoe-horn in the smattering of new content we’d always dreamed of—but didn’t know was scientifically plausible!”

In addition to the new and culled content that will be a part of 2016’s Jazzpunk, the game will also feature an arena deathmatch mode inspired by weddings. Brouse promises “couch-friendliness” in the deathmatch modes, which will allow for a “gaggle of bizarre gadgets and deadly marital aids to help you tie the matrimonial noose with your friends.” Maps are Honeymoon Destinations, and characters play in a 2-4 player split screen while shooting each other with gatling guns made of tiered wedding cake and champagne corks.

Jazzpunk is already out on PC. You can find more information about the game at the Jazzpunk website.