Torbjörn is a dwarf. He builds things. What Blizzard did to come up with Torbjörn was look at Team Fortress 2 and say, “Which World of Warcraft archetype would the Engineer be?” Obviously the answer is dwarf, because dwarves are squat and grumpy, and they build things.

You play Torbjörn because you want to play tower defense

Torbjörn builds a turret. He has some other skills, which I looked up and promptly forgot, but really his defining ability is the turret. The turret sits in one place and shoots at enemy players. Because the turret is immobile, Pharah’s rocket launcher is supposed to be good against it. But because I am a noob, this has not been my experience. When I try to shoot the turret, the turret shoots me back. I often miss. The turret does not. 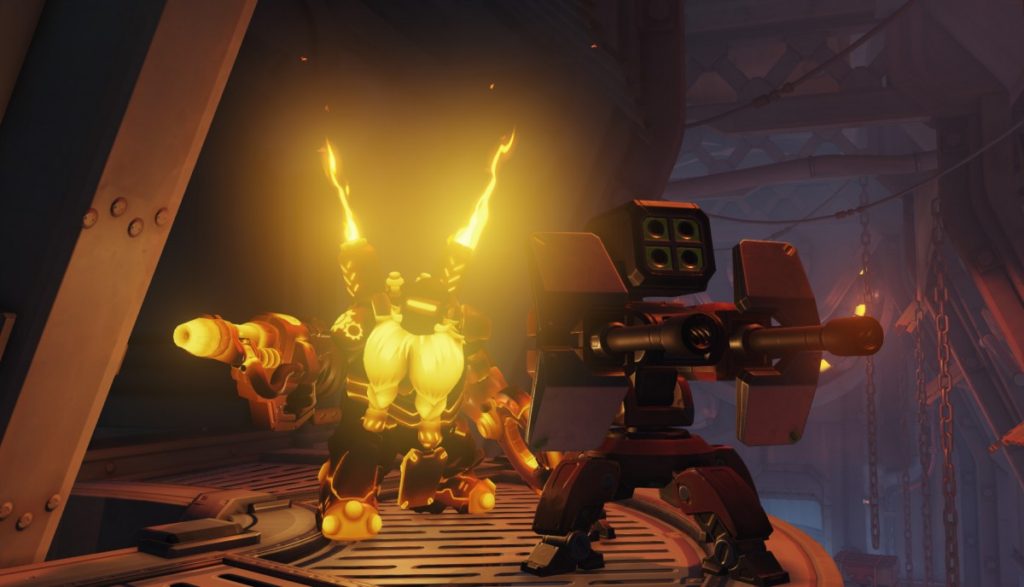 And there’s nothing wrong with that! Overwatch is overtly committed to diversity. Characters from every region of the globe! Robots, cowboys, and a soft-spoken ape! Different body types and personalities and skillsets and playstyles! For a high-flying jetpack trooper like Pharah to feel unique, you need stolid, earthy heroes like Torbjörn to differentiate her from. In the landscape painting that is Overwatch, Torbjörn is not the brilliant sun, nor the softly waving fields of pink flowers; he’s the dirt in the foreground, the loamy soil at the foot of the trees, the simple and pastoral foundation without which the other elements, for all their beauty, would seem garish, lurid, and fundamentally incomplete.

Bastion – Bastion is the machine pointed at the world
Hanzo – Hanzo “looks like a good man,” my Japanese mom raves
Junkrat – I have fallen in love with Junkrat
Mei – Here comes Mei, the badass nerd hell-bent on revenge
Widowmaker – Widowmaker made a widow of me