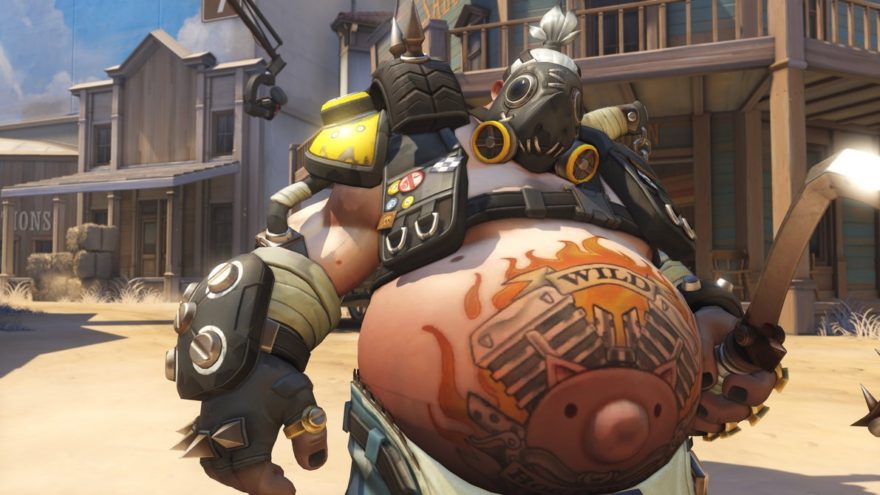 He may look like a figurine from the inevitable Disney Infinity Mad Max playset, but in live action he would be Mickey Rourke in The Wrestler (2008). He huffs his corpulent form across Overwatch’s maps like a chain-smoking asthmatic, grunting like a boar with its head stuck in the plastic feed bin.

At age four Roadhog’s mother called him in for dinner. When he didn’t respond she came storming out the back porch door and found him rolling nakedly in the mud. Frustrated and hot from cooking she shouted, “Come, now! Only pigs play in the mud!” Roadhog, pausing for a moment from his gleeful tunneling screamed back “Then I am a pig! A fat piggy! A FAT UGLY PIG!”

Roadhog’s abjection is near Shakespearean

Occasionally he slams another canister of solvent into his sewn-up gas mask, eyes clouding at the edges as the channels of his nose are cauterized by the fumes. He barely raises his eyes from the ground, his foot-high jump closing all paths off but the widest and flattest, as if he was preternaturally suited to asphalt highways.

At age 10, Roadhog had worn his Mad Max VHS down to little more than screams of white noise. His copy of Mortal Kombat was cracked and caked in muck, and had to be hammered into his Genesis with a grubby fist before it would work. That was how he liked it.

After emptying his homemade weapon into whatever meaty target wanders past, Roadhog cracks it open and jams in handfuls of scrap, gathered from the hulking wrecks of rusted tankers, oil caked and skeletal. He once took a shit on the calcified remains of the Great Barrier Reef.

At age 15, Roadhog’s therapist suggested his lashing out was also a kind of reaching out, to bring others closer to him. Thats where he got the idea for the hook.

Next to the angelic and athletic cast of Overwatch, Roadhog’s abjection is near Shakespearean. He is Falstaff, he is both Gargantua and Pantagruel. Come down from your balcony sweet Widowmaker, he beckons, descend to me, oh, angel Mercy. With his hook he brings all to his level, wraps them in his glorious perversity, his fuming corpulence, his polluting mire.

Then he shoots them in the face. Hurr hurr hurr.

D.Va – An ode to D.Va, the sassiest dream girl this side of Overwatch
Reinhardt – An ode to Reinhardt, tortured scion of a broken land
Winston – Winston, the Science Gorilla, is in charge
Zarya – Zarya makes Mother Russia her bitch