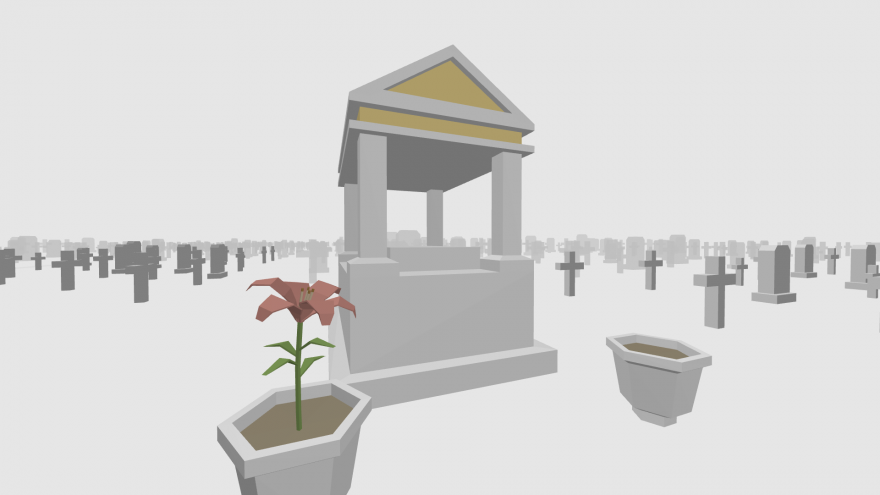 When I last spoke to Tymon Zgainski in late 2012, he had just entered his adult life, being a new student at the , and was “concerned with issues of modern civilization and our responsibility towards the environment we live in.” At the time, he was showing an image from his first-person adventure game The Official that depicted a chair underneath a noose hanging from the jagged ceiling of a low-poly office.

That image is unquestionably haunting. It’s a reflection of those deep-cutting feelings we may experience during those early years of adulthood struggle, when everything is uncertain, and blockades seem to appear in every direction—bills, the job market, growing distant from friends. That’s why Zgainski told me back then that The Official tackles subjects such as the mundane routine in our lives, the cruel corporate world, the meaning of life, religion, and why mortgages are bad for your health.

The Official has played the role of an artistic digital diary

None of this has changed, it’s all still in there, but in the two years since that conversation, Zgainski and The Official have headed down new and different paths. Whereas previous screenshots that Zgainski shared with me were of corporate offices and depressing soliloquy such as “I feel like I wasted my entire life,” now he shows me a luscious low-poly jungle scene in which the player is tasked with feeding a crocodile.

Sure, there’s a dangerous animal in close proximity, but the grey despair of the office has been replaced with enlivening greenery and a waterfall full of refreshing energy. The crocodile almost seems cute as it wags its tail upon eating the bait the player throws out for it. Zgainski also showed me an infinite graveyard that is meant to be explored in search of the meaning of existence, but that’s beside the point. Zgainski has, at least in part, moved beyond focusing on the grim existentialism of The Official and into a plurality of connected ideas, and so has he in his own mind.

As he told me, “A lot of ideas and concepts contained in the game just came to [him] naturally and reflect what [he] was thinking and going through at the time.” In a way, The Official has played the role of an artistic diary, in which Zgainski let his stream of consciousness—his thoughts and feelings—guide the design of the puzzles and the environments. In fact, one of the levels in The Official is taken directly from a dream that Zgainski had one night. He thinks videogames are “an amazing medium for recreating feelings,” and the most engaging aspect of this particular dream was how he felt in it; he wanted to share that with people.

“Dreamlike and eerie (and possibly a bit unsettling) is definitely the feel I’m going for,” Zgainski said. But he’s keen to avoid the confusing weirdness of “dreamlike logic” and especially the obtuseness of “adventure game logic.”

So, while The Official weaves players through “normal places” and “exotic dream locations,” its purpose is to examine the subconscious, as this is what dreams are a product of, and what Zgainski refers to as “a space where a lot of ideas crystallize, independent of our everyday reality.”

Although the suggestion is that all of the directions that the game takes seem to have come about without a plan or a meaning, Zgainski showed awareness of his process, and what it brings to The Official, when talking to me about it.

“When you play a videogame you are literally experiencing someone else’s world and there’s no restriction on the level of detail that is presented to you, nor the depth that you can explore. If that world is used to represent an idea or some concept – that’s a very powerful way of conveying a message. This fascinates me,” Zgainski said.

Zgainski always wanted to convey a message for players to interpret but has never been entirely sure what it is. He knows now that he wants to “create a certain flow of thoughts in players,” although he won’t spoil what that may be, and he’s positive on how he’s going to achieve that, and that is with environmental storytelling and puzzles.

“I feel there are far too many games which use puzzles as fillers, just something to keep you busy, while I believe every little thing you do in a game should contribute towards what you want to say with it,” Zgainski told me.

“When I design a puzzle, I would first sit down and come up with what I want players to understand from solving it, and how I want them to feel about it. Environments, graphics, sound and other events in the game are there to reinforce all of that.”

Everything in The Official has a place and purpose, despite the aforementioned free-flowing design process. This is partly why the game has low-poly graphics, as the flat-shaded triangles and chunky 3D evokes only the feelings that Zgainski wants it to, and is not an attempt to recreate real spaces or textures (in fact, there are not textures) as other graphical styles might. It’s all under control and important to take in; nothing is wasted. “I think the less clutter the more focused the experience, which is important when you care about the message,” Zgainski said.

Undoubtedly, The Official is a personal game for Zgainski. But, unlike many other “personal games,” the relationship it has with its author is, by and large, informed by the subconscious and the thoughts it produced while he experienced the ups and downs of everyday living.

The Official will be released this fall. You can keep up with it on its website.