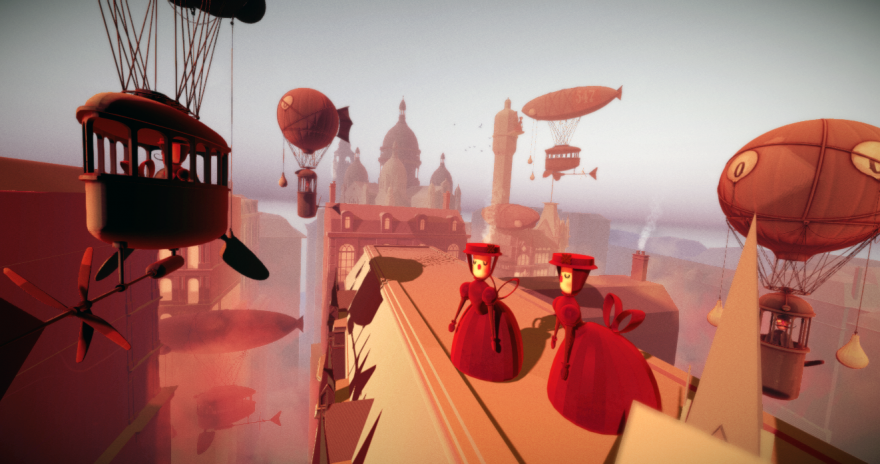 Zipping along an elevated restaurant and opera house, there are flying cars, buses, and other ships. The sky is teeming with these vehicles, transporting Victorian-garbed folks to and from their destinations. This is the futuristic world envisioned by 19th century artist Albert Robida in Le Sortie de l’opéra en l’an 2000. This is the same world inspiring Voici, an upcoming game being created by Rotterdam-based designer Joost Eggermont. Under the backdrop of a retro-futuristic city, Voici oozes the same kind of playfulness and charm as found in many of Robida’s prescient works.

Two years ago, while looking for visual inspiration, Eggermont stumbled upon Robida’s science-fiction illustrations. Depicting a vertical city architecture, the illustrations echoed Blade Runner (1982) but with a dash of “fashionable Victorian style.” Eggermont says he fell in love with the character design of the flying machines which performed “almost aerial choreography.” Soon after, he found Robida’s science-fiction novel Le Vingtième siècle (1890). Marveling at the “great pictorial quality of the illustrations,” it made him want to explore the world further.

When asked about what fascinates him the most about Robida’s style, Eggermont points to his refreshing take of a steampunk world: “Instead of testosterone-steam and steel-driven airships, Robida draws these easy, floating, elegant lightweight airships … instead of carrying heavy artillery, [they transport] these lovely dressed women around. I loved how it showed this vibrant and fashionable women-centered world. [I] thought it would be nice to translate this to a game world.”

“It’s like becoming a tourist in your own work”

From the way Eggermont describes Voici, the game is quintessentially about the moments between our destinations. He says the game is about piloting aerocabs while trying to find routes around “this throwback vertical Parisienne cityscape.” As you try to get the “fashionable Parisiennes” to their destinations on time, you might “get [held] up by the Atmospheric Gendarmes or traffic jams, dissolve into smog, or end up hanging in the wires.”

Admittedly, though, Eggermont says Voici is still early in its development. Up until this point, his focus has mainly been on crafting the warm-toned visuals of the game. Only now is he starting to explore playable ways to weave the same “lightweight floating poetry” you get in Robida’s works. While a challenge, Eggermont is encouraged by what he’s starting to see: “Slowly creating this world you envisioned and putting it all together is always very rewarding. It’s like becoming a tourist in your own work.”