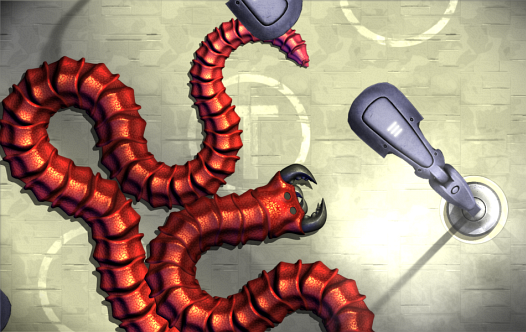 Smash-hit mitochondria simulator Agar.io (2015) and its recent knockoff Slither.io took certain corners of the internet by storm a while back. If you’re confused to why this is, here’s a hint: they’re super addictive. They’re easy to grasp, have a manageable skill curve, and ring that bell in your brain that says “One more try!” It’s a simple but foolproof formula—the same reason you kept coming back to Facebook games in 2011, and the same reason you haven’t deleted Stack from your phone even though you swear you’ll never touch that thing again. You can’t stop swiping.

It sure resembles old entomology illustrations

But here’s the thing: Agar.io was about cannibalism in a cell culture. Slither.io was about greedy worms that can’t stop eating. The main idea carried by these games is that Mother Nature is hungry. So why fight it? We’re well overdue an a .io game that makes us forget we have a class to go to and has something more to teach us about its starving protagonists! Enter Insatia.


Insatia, a “carnivorous worm simulator,” is exactly what it sounds like. Give the Slither.io guy a millipede carapace, some sick pincers, and the ability to lunge at and sever the torsos of other worms, and you’ve got the gist of this game. It’s pretty to look at. It’s kinda violent. It sure resembles old entomology illustrations a whole hell of a lot. And, crucially—as with the other worm simulators that it will unwittingly usurp—it’s not complicated. All of the controls are on the arrow keys.

Just to shake things up, you may occasionally take the place of some of the prey grubs—equivalent to the glowing dots of energy you eat in Slither.io—and the creator’s website hints that there may even be a plot somewhere inside the game about how scary centipedes are. But the important thing is that now you can spend your working hours playing that snake game with more controls and full gore. Really, they’ve done us a service.

Bite into that alpha build over on Insatia’s website.