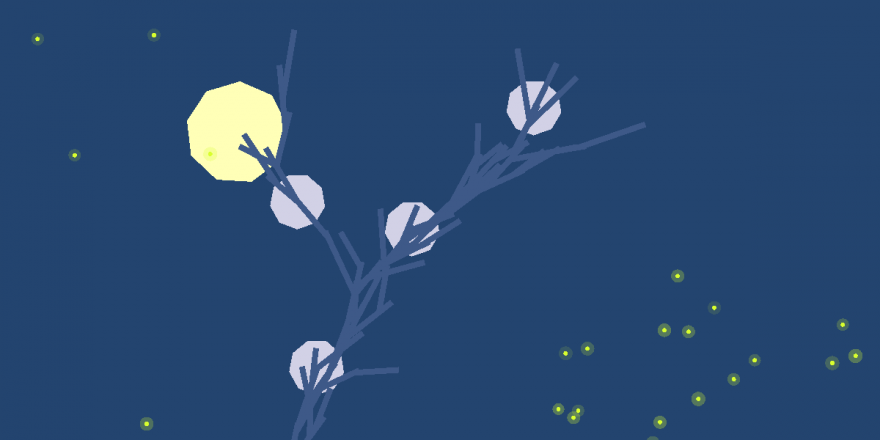 Ojoon EP is one of the best ways to take a break from work today. It’s a chill, three-track “visual instrument” that you can pour your troubles into for as long as you need. Perhaps its best property is allowing you to become a musician right from the (dis)comfort of your office desk.

There is no goal in Ojoon EP but there are instructions. As you start up the first song—Rullibuk by Daniel Hagström—you’re told to play with the number keys. Tapping them causes twinkling hexagons to burst across the screen in juicy purples, pale oranges, lime greens, and light reds. It’s a smart way to turn a regular keyboard into a makeshift synthesizer, and one that synergizes effects for your eyes and ears. If you hold the number keys in then a seismic bass chord engorges as the hexagons swell in size, revealing a little bustling galaxy of colorful dots swirling inside.

this is a confident and surprisingly intuitive musical takeover

Further toying can be had by grabbing the mouse in one hand and moving it around. This motion bends the pitch of the notes you play. Again, this is a confident and surprisingly intuitive musical takeover of the tools you typically use for compiling spreadsheets and typing up those exhausting reports. Better yet, hitting the Spacebar switches the track to its B-side. The visuals turn to the dark hues of a negative print, and what was once bright, candy-colored notation becomes sounds that belong to the darker recesses of outer space.

The last function available to you is hitting Backspace to move on to the next song. The second track is Knyllamír by Rudolf Westerholm, which has a slightly darker electronic sound than the first. In fact, when bending the bass chords with my mouse I found myself recreating the creepy choir sounds of the Doom PSX track. The hexagons are appropriately replaced with electric raindrops and humming horizontal gradient bars. Alas, it has the feel of the same idea you toyed with in the first track, but recycled with a slightly different sound.

Where Ojoon EP really shows its potential is in the third and final song; Sósûg by Kozilek. This time you’re not given a space to decorate with perpetual shapes and ripples, but are involved in shaping an endlessly growing plant. The number keys emit jabs of an emulated string but, more impressively, create twigs that offshoot from the plant’s bare branches.

Holding the keys down to create bass sounds sees soft round flowers blossom with immediacy, and when you let go, they frazzle into delicate yellow bits that fly off in the breeze—on the B-side they appear to be fireflies drifting into the night sky.

While Ojoon EP is a wonderful instrument as a whole, I’d love to see that last track expanded upon, becoming more complex as you explore upwards. Adding abstract backgrounds with creatures and other environmental plumage to interact with through creating music would likely be the equivalent of a number one single.

You can download Ojoon EP for free over on itch.io.