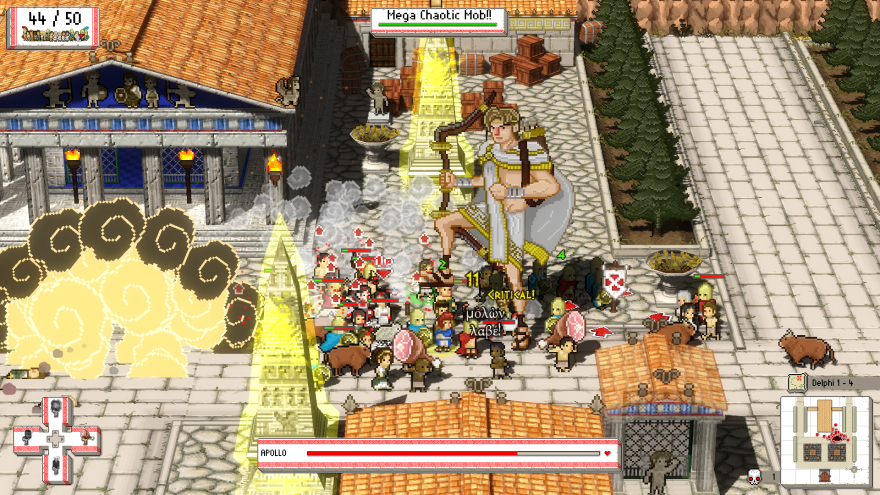 Coffee Powered Machine, the wonderfully named developers behind the forthcoming game Okhlos make only one promise: there will be angry Greek mobs. What more could you ask for?

Before you start rampaging, a little bit of context: Okhlos is set in ancient Greece. Its 16-bit style feels loveably and suitably antiquated, even if it’s not as antiquated as ancient Greece. The game, which will be released for PC, Mac, and Linux, is about attempting to overthrow the Olympian Gods. Why, exactly? Who knows, but as a means towards achieving that end, you’ll need to build a large mob.

lead a tornado of human limbs and emotions.

It clusters around you, building in strength and size as you march onwards, pummeling procedurally generated cities. The beauty of procedural generation is that there’s always something to keep the mob busy. Actual cities should find a way to emulate Okhlos’ mechanics.

According to Coffee Powered Machine, the mob in Okhlos will have “hundreds of unique characters that can join your mob.” That facet of the game gets at the enduring mystery of the mob, a social unit that is treated as a unitary whole but composed of individuals with (duh!) individual interests.

Rulers and students of the mob often ask why and how these manifestations of the collective will come together. Okhlos may not answer all of these sociological questions but it will give you the chance to experience and lead a tornado of human limbs and emotions. Consider it lo-fi research into human behaviour.

You can find out more about Okhlos on its website. It’s also on Steam Greenlight.