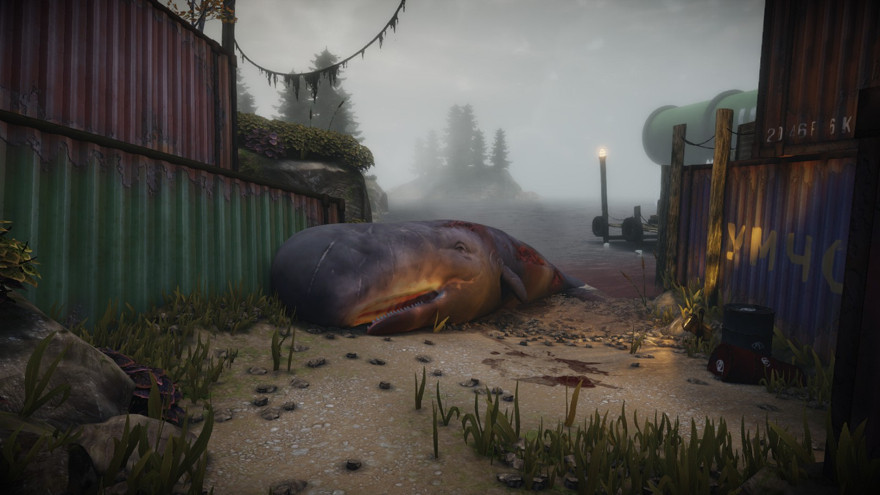 Much of the comfort present in The Old City: Leviathan is ephemeral. It comes in brief flashes of recognition, objects that represent things long past: typewriters, tools, flowers, stuffed whales, and children’s letter blocks. As soon as I stumble upon them, they’re gone again, and I’m in on my way down a different corridor, trying to piece together a coherent story from within the prison of a madman.

He is nameless, or a Minotaur, or maybe Jonah, entwined with the myth of the whale. Most importantly, he’s our guide through the wide-eyed setting of The Old City—there is no external without his internal. Everything we see is through his eyes; everything we think is through his rambling, semi-coherent thoughts as we explore the ruins of a place and civilization.

As such, the comfortable discoveries aren’t so much ours; they’re his. Rat corpses lead to rants about the dirty creatures, while an idle rowboat on a distant shore has him relate a childhood memory embroiled in a pessimistic comment about the nature of adulthood.

This has its advantages: the world is a vague post-apocalypse, one where society has fallen down and has already tried to get up, split into vague religious factions, and fallen again. The Minotaurs—in their sort of impartial misanthropy—stayed out of it all. Maybe that’s why our Minotaur is still alive; maybe he’s just lucky. The player learns all of this from typed notes left on walls from other biblically named characters, from massive, ornamental tomes left open in equally specious rooms, and most importantly, from the main character’s endless speeches addressed to some unknown being: Leviathan.

Leviathan, he believes, keeps him safe from the real atrocity of the world around him. As such, it’s only when that security crumbles do we see the real nature of the world: a place littered in corpses and bloodshed. Return to a familiar area after a dream-like epiphany and instead of emptiness, you’ll be met with bodies hanging from rafters, next to razor blades on blood-stained mattresses, or next to the guns that were meant to protect themselves from each other. They’re shocking and breathtaking images that serve to underscore the twisted reality that has happened in this distant future—mere glimpses of the life that once existed here, or maybe still exists elsewhere.

I would play this game forever if it meant getting to know these people, their stories, and their world. The game’s heart is in letters from unknown characters to each other, brief hopes of loves and life lost in turmoil. Instead, they—and others—are relegated to props and references, just like their biblical namesakes. Our protagonist is fit to walk by their corpses without comment, preferring to soliloquize instead about things that meant something to him. His journey is a personal one, and that’s fine: this is very much his story.

It pains me to say I very much wish it wasn’t.

At a certain point his journey (and his rants) turn into an epistemological one, transforming from the exploration of reality, truth, and dreams in relation to the world into the exploration of reality, truth, and dreams, in relation to themselves and himself. Sprawling walls of speech and subtitles fuel a philosophy term paper that’s rooted in nothing but an unreliable narrator’s unreliable mind, written in a style that mistakes verbosity for profundity, and lends itself to being read breathlessly. Even if the beginning and ultimately heartbreaking culmination of his journey are a painful look into a sort of coping insanity, they’re all marred by his descent into a world that is defined entirely by his dreams and logic. Gone are the stark fluorescent lights of a run-down storage facility, gone are the stalled-out subway cars; in their places are high-reaching spires on the peaks of some weird, moonlit castle, awash in statues instead of bodies, the whole setting a nod to an (ungainly) castle metaphor.

Even Dostoevsky’s hateful Underground Man had purpose in his own context, a mindset of misanthropic existentialism that acted as an exploration of philosophical and societal themes. Old City’s Minotaur isn’t nearly as useful, but just as awful (even self-admittedly). While he is the lens through which we learn the world, the game devolves into a third act of narcissistic solipsism. But even if this is an intentional move—and I suspect it might be, considering the external plot and its tragic, personal story—it’s so overbearing that it rids the player of any desire to listen or agree. While there’s an earlier hint of ideological, religious satire, it’s totally removed in favor of overlong, overly-earnest epistemological soliloquy. What’s left is an unreliable narrator without anything to be unreliable against. In the same way the protagonist was formerly stuck in a prison of his own making, the player becomes a prisoner of his rambling, a forgotten tourist who can’t help but wonder if the tour guide’s going to remember them.

It’s an ambitious game, and I want to love so much of it. The plot, though mired by overwrought narration, is deeply and darkly touching, and so too are the extra notes, diaries, and hints spread throughout. At the end I was wrested from the dream world and placed back into the setting of reality, altered once again: only this time there weren’t any bodies, just a hope that was too good to be true. I was sad to know its end: this world, its people, and even its narrator, a tragic figure whose main crime is saying too much, his true tale obfuscated by so much unnecessary commentary. In its best moments, The Old City: Leviathan toggles seamlessly between enchanting dreams and dark realities, tragic memories and tragic futures, and deeply touching realizations on what is actually happening. But they’re all never really meant for the player; they’re meant for the protagonist.