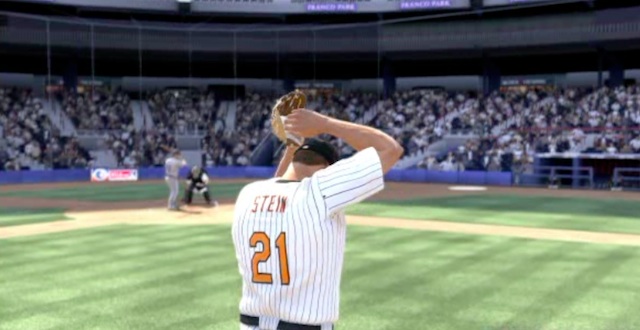 Modern sports videogames offer certain fantasies of athletic prowess. The characters I create are usually breaking into their respective sports at a young age, with a bright and long future in front of them. Over the past few years, I have been an elite high school football player recruited to play for a top university, a young PGA Tour golf phenom emerging from obscurity to climb the leaderboards, and—most frequently—a talented teenager opting for a life in baseball instead of college. These are narratives of youthful accomplishment and exceptionalism.

Of course, not all athletes have the same story. Some come to the game later in life, with their age in tow. A recent dramatic example of this is Jimmy Morris, the pitcher whose life story was dramatized in the film The Rookie.

There’s a touching moment in the movie where Dennis Quaid, playing Morris, is in a phone booth calling home. The middle-aged pitcher, mired in Minor League obscurity, is causing a backup on his teammates waiting to use the pay phone. When he finally emerges, one impatient player throws a verbal jab at Quaid’s hunched, weary frame. The wise pitcher calmly replies, “I was helping my son with his math homework. He’s nine.”

To borrow a line from the great baseball writer Red Smith, “the art of fiction is dead.” Reality has strangled invention in the form of Jimmy Morris, the one-time hot pitching prospect who was plagued by injuries in his youth before making the Majors. Forced into an early retirement, Jimmy resigned to small-town Texas and settled down with his wife, two children, and comfortable job teaching high school physics and coaching baseball. More than a decade later, he tried out for the Tampa Bay Devil Rays, only to discover he could still throw very, very hard. Thus began his second Minor League career at the ripe age of 35.

Morris is a real-life Roy Hobbs, the middle-aged hero in Bernard Malamud’s The Natural. A great novel before Hollywood put Robert Redford in the role, the story explores themes of promise and redemption, of age and ability, of the naïveté of youth and the often painful wisdom of experience. Malamud’s novel ends in surprisingly different fashion from the climactic, lightbulb-shattering finale of the film. Lacking the glistening sheen of Hollywood, and the sandy-haired handsomeness of Redford, Malamud’s story is about the bitterness of life’s lessons not learned. Hobbs reflects toward the end of the novel, “I never really did learn anything out of my past life, now I have to suffer again.”

Soon after dramatically striking out batters in his first Major League appearance, Morris would suffer injuries similar to those that had kept him from success in baseball as a younger man, making his glimpse of the Majors tragically brief. Hobbs, also 35, could not shake the past that haunted him. In the end, their last chances to come to fruition, filled with the anticipation of youth, are shallow compared to the realities of age.

This is a kind of sports permadeath—a willingly adopted play style in which a single mistake mandates a complete restart of the game.

Sports videogames are not so different than other genres of games that offer superhuman scenarios for heroic exploits, whether saving the earth from destruction in a space opera, or single-handedly slaying the many dragons of Tamriel. They are power fantasies for sports fans. In career modes, the role-playing features built into many sports videogames, I repeatedly play out the fantasy of the young phenom who has unquestionable natural talent and a Hall of Fame future in his sport. Modes like Road to the Show in MLB: The Show, the NCAA Football Road to Glory, and the Tiger Woods Road to the Masters (that’s a lot of roads) allow me to earn experience points and level up to become an elite athlete.

I always start at the youngest age to afford my character as much of a future as possible. Watching The Rookie and reflecting on The Natural, I felt compelled to try something new: to roleplay a career in MLB 12: The Show as a 35-year-old, facing one last chance at success, one last chance at fulfilling his promise.

For the first time, Abe Stein really resembles me. This time the 35-year-old pitcher I’ve designed looks like myself, rather than a leaner, fitter, 18-year-old Übermensch. This Abe Stein, by baseball standards, is old. Like me, he has a beautiful, lovingly supportive wife and an amazing young son, both waiting at home for him, just a phone call and a million miles away. He’s stuck playing AA Minor League baseball for the SeaWolves in Erie, Pa. Like Jimmy Morris, he throws hard, very hard; but at 35 his future in baseball is not burning bright. It’s only glowing.

The underlying narrative in the Road to the Show mode, the experience referenced in the game’s title, is the process of working toward making it to the Major Leagues of baseball. My Road, like those of Morris and Hobbs before me, feels long and decidedly uncertain. The designers of The Show smartly had your skill attributes deteriorate with age. This models the real challenge baseball players face as they head into their late 30s, when their bodies cannot handle the physical rigor of playing the game.

Was this performance impressing anyone in the game?

My rookie is already approaching a rapid decline. Each bone-creaking pitch feels like my last. Baseball clubs don’t sit around waiting for a middle-aged man to “figure it out,” and when I give up a first-inning home run because of a mistake pitch, I fear I may soon be done—not just with the game, but with my career. It’s a pressure that comes not just from a desire to succeed, but from knowing that small mistakes could be final. This is a kind of sports permadeath—a willingly adopted play style in which a single mistake mandates a complete restart of the game.

I can feel my own age in the game. For example, when Abe Stein injured his shoulder partway through the season, an event that could happen to even young players, I immediately contextualized it as a result of my “advanced” age. Was my 35-year-old arm breaking down? Would I be able to recover from this injury and regain the form that could keep afloat my chances of making the Majors?

As a player, I wonder how much more time I want to invest in the videogame, trying to make it as far as I can as an aged ball player. And yet, even as I lament the last pitch, watching the ball sail over the fence, with every strikeout I rack up I can taste the saltiness of possibility that leaves me thirsty for opportunity. At one point I shut down five batters in a row with strikeouts. Was this performance impressing anyone in the game? Was my chance any closer, or was I deluding myself?

For both Morris and Hobbs, at least in the movie adaptations of their experiences, the climax is reached with dramatic glory. With a dramatic homerun, and a remarkable debut, both fulfill an old and distant promise. The twist on the story, their age, becomes the foundation for an against-all-odds message that smacks of saccharine Hollywoodization. But I’ve yet to learn what the fate of 35-year-old rookie Abe Stein will be; he is still pitching in rural Pennsylvania, hoping to break out before it is too late. At any point in the game, I can choose to select the “retire” option and hang up the cleats on my virtual career. With each week, and month that goes by stuck in Erie, that choice becomes more enticing.

Boomshakalaka! explores the intersection of sports culture and videogame culture.