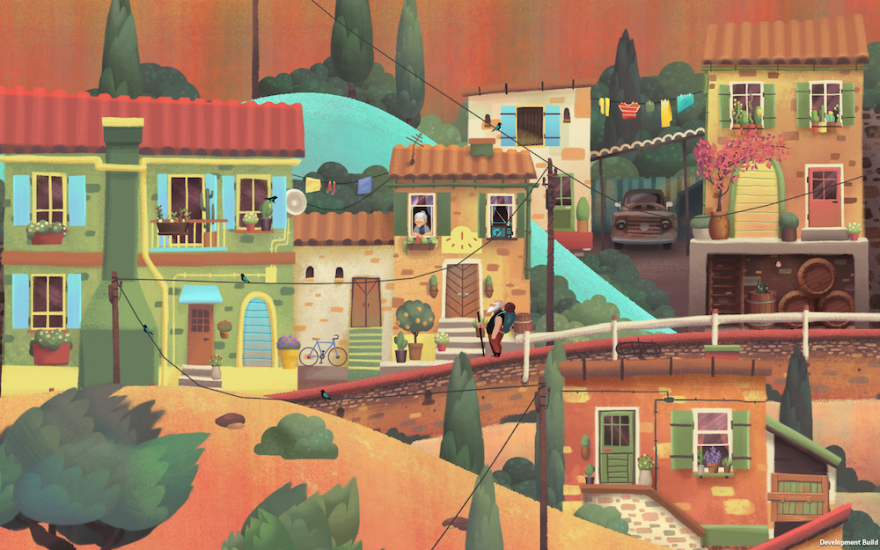 The tagline describes it as a game about life, loss and hope, “a final chance to seek amends and find your heart, once lost at sea.” The chalky art style and sweet little drawings befit a steadier pace, so there’s no rushed adventuring to be found here. The puzzles are light-hearted, Broken Rules say, and promote “playful, inquisitive” interaction. In contrast to all of these games about growing up, Old Man’s Journey is about growing old.


Broken Rules CEO Felix Bohatsch described the initial keyword for the concept of the game as “Fernweh,” a German word similar to our concept of wanderlust, but implying an almost painful separation. Fern-, the prefix, means distant or far-off, and -weh is the word for hurt or pain. Felix then explained that the team was interested in exploring how traveling alone often leads to introspection: so that their character could “[reflect] on their life’s choices,” they chose an older character with an entire life to remember.

“there are enough fantasy and space games out there”

The studio also drew on what has become a new and wonderful experience for most of the members: parenthood. Broken Rules’ founders have seven children from 3 months to 6 years between them, and the balance between family, work and personal needs was another inspiration for a more introspective narrative.

The game is set in the Alps, a setting it shares with Broken Rules’ earlier games Secrets of Raetikon (2014) and Chasing Aurora (2012). Broken Rules likes to explore environments that they’re familiar with—they’re Austrian—and so Old Man’s Journey is set right on the other side in little fictional towns in France, sometime in the ’90s. “Let’s be honest, there are enough fantasy and space games out there,” Bohatsch quips; he prefers to work with what he knows.

But Broken Rules don’t want to take everything from their earlier games. From their experiences with Secrets of Raetikon, a puzzle-based exploration game, and Chasing Aurora, a multiplayer action game, they realized that it hindered accessibility and focus to work in too many gameplay elements at once. Secrets of Raetikon often felt confused, Bohatsch said, and Chasing Aurora’s reliance on a specialty controller made it unrealistic to play as intended, so Old Man’s Journey is going to pare down those ideas to a single, simple mechanic, with the slower pace intended to make the game more accessible and easier to play. A calm game about the waning end of a life has no interest in exclusion.

Fortunately, their hard work and thoughtfulness is already paying off. Old Man’s Journey was recognized in this year’s Pax 10, and when you look at the confidence it already shows, it’s not surprising. Broken Rules haven’t announced platforms or price yet, and the only release date given is 2017, but they’re not rushing. And neither is the old man.

Old Man’s Journey will be out next year.